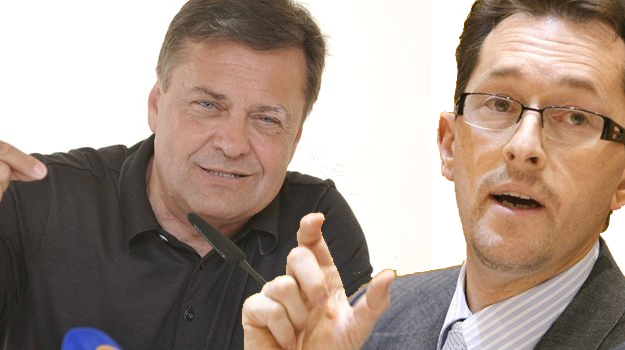 After the centre-left government led by Borut Pahor resigned, Slovenia’s political destiny appeared to be doomed to a turn to the right. Former Prime Minister Janez Janša was considered likely to win the next early elections, due to take place on 4 December. However, things have recently taken a dramatic turn

It appeared to be game over. After the failure of the centre-left government and the scheduling of early elections for 4 December, Slovenia seemed poised to shift to the right politically. Former Prime Minister Janez Janša's party was already celebrating what it believed would be an overwhelming victory. On the other hand, poor Pahor was hoping to put together what was left of his coalition, thus remaining the only alternative to Janša. It felt like Slovenia was moving towards a sort of bipolarism, with a tendency to form “great coalitions” in the future.

But eight weeks before the elections, the political system has been rocked to its core. The centre-left had been looking for years for an alternative to vapid Pahor and many hoped that the mayor of Lubjana Zoran Janković would run for national elections. Finally, he threw his hat into the ring.

A manager turned into a politician

Janković was a successful manager who became known to the general public when he saved the Mercator supermarket chain. When Janković took the lead, the company was on the verge of bankruptcy but in a few years, thanks to Janković 's management, Mercator became the leading company in the supermarket sector in the Balkans.

He was later hastily forced to resign when the Janša government sold Mercator with a plan (without actually succeeding) to take control over Delo, the main national newspaper.

At that point, Janković decided he would turn to politics and he ran for mayor in Ljubljana. In 2006 he won and in 2010 he was triumphantly confirmed. His managerial style, quick to choose and quick to make decisions, provoked criticism and he earned the label of “sheriff-mayor”. He was also criticized for the way he managed certain investments and his children's business involvements.

Aside from the criticism, the efficiency of his management and the actual implementation of many of his projects were solid. Ljubljana changed radically in a few years and things that had previously seemed impossible were done.

Today, Janković is considered a real icon for the centre-left, a name to be treasured as a possible alternative. Some suggested that he consider a run for prime minister after the 2008 elections, but the suggestions did not amount to anything at the time. Jankovic had always refused to run for office at the national level and voiced a desire to go on being a mayor and complete the projects he had helped start.

But after a long negotiation period, Janković made his decision: he will run with his electoral list in the next elections. The day before he made his decision, many from the political, corporate and show-business worlds had gone to Ljubljana to urge him to run for elections. Former President Milan Kučan and the president of the first democratically-elected parliament, France Bučar, also descended on Lubjana to convince him. They were joined by singer Magnifico (one of his songs has been used for years as the jingle of “Le iene”) and actor Branko "Đuro" Đurić (one of the protagonists of No Man’s Land, the Bosnian film awarded an Oscar prize).

At the moment, Janković looks like the best (and the only) card the centre-left has to play. It wasn’t very likely that electors would support Pahor and the other parties of the former majority enthusiastically. Indeed, polls indicate that a large share of potential electors have not yet decided who they will vote for and that a high level of abstention is to be expected.

Of course, traditional left parties were furious about Janković running for office because they fear he might take some votes away from them. Some even think that Zares and the Demo-liberals risk not even gaining access to Parliament. The most angered group, however, is the former Communist party. The secretary general of the Social Democrats wrote on his Facebook profile that Janković is running “to destroy the left”. Of course, many sarcastic comments were immediately made about Pahor’s government role in destroying the left.

Running for the second time

If the exiting prime minister is in a difficult situation, former Prime Minister Janez Janša is certainly not in an easier position. Janković is, for Janša, a serious rival, but what made the Democratic Party furious was the decision of Gregor Virant (a centre-right politician) to run for presidency. The former minister of public administration was, according to many, the best man in Janša’s government.

Many intellectuals supported him, including some who had been supporting the centre-left and had previously signed a petition calling for early elections last June.

Rumors about Virant’s decision to run for presidency had been circulating for a long time, but few believed that Virant would have the courage to organize his campaign independently and form his own political coalition without even letting Janez Janša know. The Democratic Party immediately called him a traitor and focused on (like real gentlemen) family ties between Janković and Virant.

Virant is optimistically hoping to gain as much as 15 percent of the votes and swears his aim was never to divide the centre-right.

Another centre-right party, the People’s Party seems intent on distancing itself as much as possible from the Democrats. During the latest elections, they had risked literally being swallowed up by Janša’s charismatic standing and they barely gained access to the Parliament.

If until Sunday night Slovenians thought they would only be able to choose between Pahor and Janša, today they have some more alternatives. Both have been in the political arena for 25 years and both have guided the Slovenian government. Their skills and abilities are well known to voters.

On the other hand, two new faces, Janković’s and Virant’s, are now in the Slovenian political arena. Janković is the traditional entrepreneur who turned to politics, with all the related pros and cons. However, Janković embodies other important symbolic aspects in a Slovenia which often appears as closed and xenophobic. He was born in Serbia to a Slovenian mother, he moved to Slovenia when he was still a child, and - if he won the race - he would become the first head of the government whose descent is not entirely Slovenian.

Virant is a member of the new centre-right: urbanized and modern, liberal, looking to the future rather than turning to the past. Who knows, if they agree, they might as well work together.