Why Slovenia took to the streets 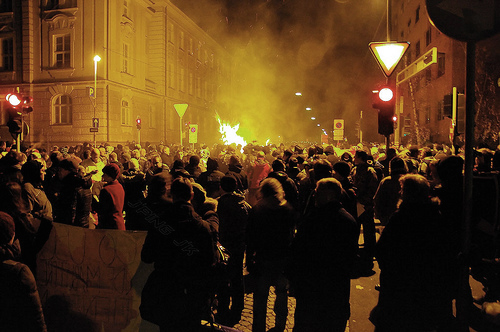 Demonstrations in Slovenia have been going on for weeks and a public sector strike is scheduled for January 23rd. The analysis

Until a few years ago, Slovenia was singled out as the success story that all Balkan States should take as an example. The spell is now broken. The political crisis triggered by the Merkel-style economics of the current centre-right government led by Janez Janša – and, to a lesser extent, of the previous centre-left government of Borut Pahor – is a mirror of the conservative, neo-liberal 'revolution' ongoing in the European Union.

In terms of economic and social parameters, Slovenia is not Greece. On the other hand, over the past twenty years it has not followed the ex-Soviet "new Europe" path either. Slovenia has not come to terms with its communist past by opting for brutally capitalist models, destroying welfare and labour rights as if they were the enemies of development and prosperity. Slovenia has instead kept its guard up, introducing market economy rules gradually, avoiding neo-liberal extremism and maintaining an enviable level of welfare, by many considered "Scandinavian".

Franco Juri was born in Koper (Slovenia / Yugoslavia) in 1956 to an Italian father and a Croatian mother. Journalist and satirical cartoonist, diplomat and former Slovenian MP, he collaborates with Slovenian and Italian newspapers. In the '80s and '90s he worked on human rights and was deputy in the first democratically elected Parliament in Ljubljana. After Slovenia's independence, in Janez Drnovšek's governments, he held important posts in the diplomatic service of his country: Ambassador to Spain and Cuba and Secretary of State for Foreign Affairs.

Privatization was carried out selectively, excluding large state-owned enterprises, infrastructure, education, and health. This has made it possible to maintain the welfare state and some fairness for citizens. The application of the so called "national interest" in privatization, however, i.e. the preservation of private capital in Slovenian hands, has generated phenomena of political and financial patronage as well as widespread corruption.

Many public companies passed into the hands of unscrupulous national managers, former directors of public companies linked to this or that political faction, but also politicians and former ministers who, thanks to personal and political connections, soft loans, and insider status, bought the bulk of actions offered by state-owned banks, often without any warranty, giving way to deleterious speculation processes that have often led once healthy, internationally established companies, to bankruptcy or sale to foreign owners.

In the eyes of the public, the political class – and the very parliamentary system – is increasingly perceived as an infrastructure designed to support corruption and cronyism. Hence, the avalanche of anti-politics that has brought thousands of angry Slovenes to the streets in the last few months.

The straw that broke the camel's back, making Greece closer, was the radical austerity policy imposed by a year now by the government of Janez Janša. As if to put into practice the shock doctrine described in the book by Naomi Klein, Janša – a former Communist who became a "hero" of independence and a conservative nationalist at the end of the eighties, admirer of his authoritarian Hungarian colleague and friend Victor Orban - began his second term as Prime Minister (the first was consumed between 2004 and 2008 with his election defeat) in no uncertain terms, presenting the nation with an apocalyptic scenario. His determination was stained from the beginning by the fact that during the Pahor government, Janša himself and his political block, from the opposition benches and the pulpits of "civil society", opposed every timid structural reform, such as pension reform and even the fight against informal work.

The aim of Janša was to destabilize the government and obtain early elections. He did not win those elections, but managed to ride on the wings of a new political player, the civil list of Gregor Virant, and be elected premier of a center-right coalition with the strong support of the leadership of the Catholic Church. The chameleon-like pensioners party (DeSUS), ever present in any coalition, was decisive in tipping the scales together with the ambiguous Virant, who had introduced himself in the 2011 elections as a liberal, "clean" alternative to Janša.

Today, Janša proposes harsh reforms accompanied by restrictions of democratic spaces, the strengthening of the police apparatus, and attacks to the public sector and social infrastructure. His "Chicago boy", finance minister Janez Šušteršič (from Virant's civic list) is determined to carry out a plan of liberalization and privatization of the public sector that closely resembles the economic model imposed in Latin America in the 80s and 90s. A swift retreat of the State from the economy, through a transitional centralization of public property – so far fragmented between three para-state agencies – and a concentration of all state-owned assets in the hands of government, to streamline practices of privatization. Šušteršič's liberal vision has the strong support of international financial institutions, though Janša is not spared criticism for the botched methods with which the reforms were introduced, causing social unrest and a worsening political climate unprecedented in Slovenia. This is why Janša is already considered a burned-out politician.

True, Slovenia remains far from Greece, since it can still produce macroeconomic parameters that are not so different from the European average and from countries considered as stable. For example, its public debt amounts to 44.4% of GDP, while the average in the Euro area - according to Eurostat - is 87.4%. Inflation and unemployment also remain seated on the average of the euro area, while deficit tends to increase and currently amounts to 6.4% of the GDP. According to the government, drastic cuts in public spending are necessary. Critics, however, warn that the radical austerity policy started last year, with cuts in wages, pensions, layoffs, and rising unemployment especially among young people, accompanied by a strict fiscal policy, is destroying the middle class, public services, and the internal market, with deleterious effects that recall Menem's Argentine. Growth is paralysed, the country is demoralized, entries are further reduced and deficit increases, while brain drain is by now a daily phenomenon. Those who can, leave, while the eyes and stomach of ordinary citizens are offended by increasing cases of corruption, cronyism, nepotism, privileges, and impunity of the political class.

In these circumstances, even Slovenia's proverbial Mittel-European calm, diligence, industriousness, and obedience were not enough to avoid protests. Anger broke out first in Maribor, due to a corrupt, arrogant mayor and clergy – the same that supports Janez Janša – involved in the most disruptive financial crash in the history of the church, one that startled even the Vatican, that of the companies Zvon 1 and Zvon 2, owned by the Archdiocese of Maribor. Protests have rapidly spread throughout the country, not always in politically articulated terms and with a strong anti-system mood.

The latest scandal emerged through the report of the Commission for the fight against corruption, documenting years of income under-reporting by the two main Slovenian politicians, Prime Minister Janša and the opposition leader, entrepreneur and mayor of Ljubljana, Zoran Janković. More oil went on the fire when the two, instead of resigning, tried to get away with the charges alimenting the ideological clash. Janša, namely, defended himself by invoking the support of an embarrassed President of the European Council. Herman Van Rompuy, however, has neither confirmed nor denied the alleged support to the Prime Minister of Slovenia.

The political tussle is generalized, the ruling coalition is in deep crisis, mutual accusations multiply, but nobody seriously wants early elections. Even the U.S. ambassador entered directly into the fray advising against early elections, trying to mediate between the parties of the right. Meanwhile, January 23rd approaches, with the public sector strike announced by the unions and a likely new wave of protests that not even the control of Facebook by the police, government threats, and fines imposed on organizers (including even the University of Ljubljana and its rector Stane Pejovnik) may contain.