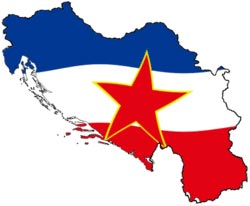 While most of the countries in Eastern Europe were experiencing revolutions and violence meant to change the course of history, Yugoslavia was, in a way, just observing. One of the important voices during that time was the Association for Yugoslav Democratic Initiative

In 1989, Yugoslavia did not experience the turbulence which engulfed the rest of Eastern Europe. It did not experience the same violence felt in Romania or have a "velvet revolution" like the one in Czechoslovakia. In those times, the country, which first reformed socialism by distancing itself from the Soviet orthodoxy in 1948, remained just an observer.

Like the other realities which had their roots in the October Revolution, 1989 had a significant effect on Yugoslavia and the next year brought the dissolution of the League of Communists and the first multiparty elections. However, whereas in the rest of the continent that year was marked by the tearing down of walls and borders, Yugoslavia saw the creation of new borders. The extreme aggravation of national antagonism eventually led to the violence of the '90s.

One of the first alternative voices to arise amidst the deep crisis in SFRY in 1989 was that of the Association for Yugoslav Democratic Initiative (Udruženje za jugoslavensku demokratsku inicijativu - UJDI). The establishment of this group, which played an active role in public life in the country for several months, was a response to a contextual awareness: "in Yugoslavia today there is no political initiative which is at the same time both Yugoslav and democratic." The program hence expressed the desire to work on "Yugoslavia's transformation into a federal, democratic community, that is, a community of citizens and federal units."

With these words, UJDI presented its manifesto which was published in March 1989 in the independent magazine Republika. The association comprised members from all federal units and all national groupings, many of them belonging to the country's cultural elite. It included economists such as Branko Horvat, sociologists including Vesna Pešić and Nebojša Popov, as well as intellectuals of other various backgrounds like Abdullah Sidran and Predrag Matvejević. Many of the activists, nevertheless, originated from other subcultures: there were people from '68, feminists, Praxis members, and so forth.

Nebojša Popov, who was the face of UJDI in Belgrade and of the opposition in Serbia and is today the editor in chief of Republika, explains: "In 1989 we organized shortly before the fall of the Berlin Wall and the other developments in Eastern Europe. There already was a critique of the system in Yugoslavia which involved certain segments and individuals. An especially important moment in this sense was 1968, which represented the first strong drive for change. We were sensitive to the situation internationally after having expressed solidarity with the Prague Spring. We also, for example, supported Solidarność."

The first nucleus of the association was created in Zagreb in January of 1989 and, in February, the founding congress hosted around 150 members from the different republics. Over the ensuing months, following the federal model, the association opened sections in many important cities in the country such as Sarajevo, Ljubljana, Belgrade, Mostar, Skopje, Split, Rijeka, and Pristina.

It was only in December however that UJDI could officially register in Titograd (now Podgorica). Authorities had rejected previous requests for registration in Zagreb as well as Belgrade because of the political content of the group's manifesto. However, the association did not intend to evolve into a political party.

Writing on Republika, Horvat explained: "Each political party is an organization of people with similar thinking whose goal is to accede to power. We are not interested in power and we do not all think in the same way." The declared goal was more fundamental in nature: to work on the construction of democratic structures, necessary for the transition in the country."

During 1989, in the face of international change, democratic demands were being made with growing persistence. UJDI continued to criticize the country's stalling, attacking the idea of the "Yugoslav uniqueness ". While authorities were trying to minimize what was going on abroad - in January of 1989 Milošević stated that the neighbouring countries, in reality, were creating "what we had already created in 1948" - Republika called for the end of the power monopoly "identical to those collapsing from Berlin to Sofia."

Popov underlines the limits of the "Yugoslav difference." He says: "In 1989 we realized that the changes which had taken place in the country were insufficient. In reality, they shifted the centre of control over the party from the federation to the republic. The political elite in the country opposed substantive change."

According to the members of the organization, the only response from the federation to the crisis could have been the transition towards a modern parliamentary democracy. First of all, new legislation was needed on freedom of association of citizens, the electoral system, trade unions, and political parties. Special emphasis was placed on the problem concerning the monopoly over information. The dismantling of this monopoly was considered essential for guaranteeing really free elections.

In 1989 however, UJDI was not the only movement in the federation which called for introduction of democracy. The distinct trait of the association was the insistence on a Yugoslav perspective. Democratic development had to be, in the view of the members, key to the issue of cohabitation in the country. At the same time, any attempt for a solution by the power system which had produced the crisis was considered to be inevitably flawed.

This approach strongly distinguished UJDI from other opposition parties and movements in the country whose programs primarily centred on the future "status" of the republics. On the other hand, 1989 witnessed the aggravation of ethnic differences within the country.

These stretched from the no-longer autonomous Kosovo, where Milošević made the famous speech about the possibility of Serbs arming themselves, to Slovenia, which was becoming ever more intolerant inside the federation, to Croatia where Tuđman's HDZ was being created. UJDI was thus in a state of open confrontation with the system of power, as well as with a majority of the new initiatives where it foresaw the degeneration of nationalist tendencies into violence.

"At the time we did not talk of war, however we were aware of the possibility of the crisis starting to generate violence. Because of this we were trying to propose alternative solutions of a democratic nature," recalls Popov.

The entire socio-political landscape was considered defective. At a time when many intellectuals were banding together in support of the "nation," the members of UJDI were often considered "traitors." Dobica Čosić accused the Belgrade activists of supporting Zagreb's anti-Serb politics while the Croat activists, after the elections in '90, had to experience the hostility of Tuđman's new system of power.

Popov explains that situation: "At first there were attempts to collaborate with the parties which opposed the monopoly of power of the League of the Communists. However, they had positions and goals which were opposed to ours.

They often did not have a real interest in democracy - they aimed primarily to win power. In 1990, we felt our goals were similar only to those of Savez reformskih snaga (Union of Reformist Forces), led by Ante Marković, whereas in Serbia those who built on the legacy of the UJDI, such as the Građanski savez (Civic Union), continued to have difficulties in cooperating with the other parties opposing Milošević on account of their nationalist positions."

Even the struggle for freedom of information was fought on two fronts: the monopoly of the League of Communists was, in fact, followed by the monopoly of nationalist power structures. Republika naturally remained the major channel for participating in the public debate, but its regular distribution was always tenuous because of financial difficulties. New support arrived in the autumn of 1990 with the publication of weekly Vreme which was founded by Srđa Popović, also a member of UJDI.

In those months, the association organized seminars, debates, and round tables, primarily in Belgrade and Zagreb. These were opportunities for discussion which sometimes attracted the participation of up to 200 to 300 people and often the involvement of other associations and civil society groups. The topics were timely: from constitutional reform - there was a call for a new democratically-elected constitutional assembly - to discussion concerning legislation for political pluralism.

Particular effort was being made to organizing discussion between Serbs and Albanians concerning the issue of Kosovo, whose problems were seen as a paradigm for the entire federation. There were forums in Mostar and Pristina, but Popov recalls how "the problem with Kosovo's history was that there had always been a political culture of domination of one side of over another."

"We believed in democratic dialogue but, from the very outset, it was very complex to launch a debate between Serbs and Albanians," he says.

There was no lack of more general discussion on issues concerning human rights, the role of youth and intellectuals, or social and even environmental issues. In this way, the aim was to work on the creation of a political culture of dialogue and the participative reconstruction of society.

The capacity of UJDI to promote its own point of view and agenda in the public debate was, in reality, limited. By the end of 1989, the association was present in 13 cities and numbered around one thousand members and many supporters but its platform and themes still had only a relative effect on the citizens. The association was seen primarily as an urban and elite phenomenon and perhaps, at times, as auto-referential.

The circumstances, according to Popov, were particularly difficult. "At the time in Yugoslavia, the level of development of civil society was limited. The political culture was often insufficient for understanding the discourse which we tried to promote. In addition, in that situation of rising nationalist confrontation and deep crisis, which was also economic, fear drove many to opt for simpler solutions."

After the multi-party elections in Slovenia and Croatia in the spring of 1990, the association continued to call for elections at the federal level but the different sections increasingly began to focus on the realities within their own republics. The association dissolved when the conflict broke out in 1991 and violence eliminated any space for any kind of discussion which would be "Yugoslav" in nature. With the end of the project, many members pursued activism in their new countries: in human and civil rights groups, feminist circles, independent media and political parties.

UJDI was the first alternative group which was really involved in confronting the monopoly of the regime and calling for democratization of the country. Back in 1989, the goal seemed like a real possibility. It was believed that Yugoslavia could take a course similar to that of the other countries in the East, followed by rapid European integration. That was perhaps the last historic expression of Yugoslavism, already faded but with the distinct trait of considering democratic progress an instrument for reintegration of the Federation. This was in contrast to those who perceived that Yugoslavia had always been ruled only by authoritarian regimes.

In any case, it was an important movement which tried to put focus on the freedoms and rights of the individual as opposed to that of the collective, which was often easily radicalized. In this sense, 1989 was, above all, a time of active involvement of many intellectuals, young and not-so-young, who subsequently continued their involvement in other places and circumstances.

Popov underlines: "There are circular revolutions which do not lead directly to a result: in this case, a real system of constitutional democracy. In 2000 in Serbia, we again engaged in the post- Milošević constitutional project which had been promised by the opposition but we got nowhere. When work started on the new constitution in 2006, we had the hope of breaking with the past, but the change was not sufficient in that case either. In reality, that text the 2006 constitution does not derive from a real process of democratic participation, despite the confirmatory referendum, and above all, it still insists on Kosovo as an absolute core value."