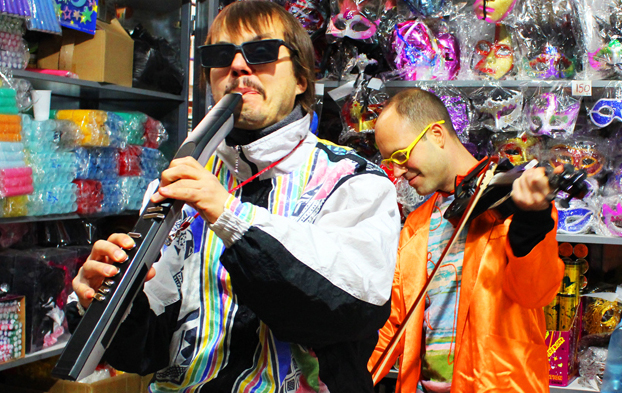 It is a sub-genre of the more popular turbo folk - and certainly a more elaborate one. It is called folk-step. Two of its greatest representatives are Shazalakazoo, a Belgrade-based electronic music duo

Based on a blend of disco music and melodies that recall the folk tradition of Countries such as Serbia and Bulgaria, turbo-folk is the music genre that has gained greater consensus in the past few years in the Balkans.

The phenomenon has been given different names according to the Country of origin: chalga in Bulgaria, tallava in Albania, manele in Romania. It is branded as trashy, poor, mediocre and vulgar by many critics. Indeed, most of the times the artistic quality of turbo-folk leaves a lot to be desired, since it has very shallow, trivial lyrics and references – more or less explicit – to pseudo-pornographic scenarios. ‘Seven, eight, I’ll slip it in and I’ll slip it out of you’, for instance, as founder of the Bulgarian chalga, Slavi Trifonov, sings.

There are actually sub-genres that in a way trace back to turbo-folk and are characterized by a musical approach that is deeper and more significant, quality-wise. It is the case of Shazalakazoo’s folk-step.

Go to the Shazalakazoo web page

A Belgrade-based electronic music duo, the band is made up of Milan Đurić and Uroš Petković. Đurić sings, plays the clarinet and programs the sounds of the drums and percussions; Petković plays the electric violin and the keyboards. Though they formed just four years ago and have only released two albums, they are already quite famous in Europe. Many Shazalakazoo videos draw the crowds on Youtube , giving proof of the duo’s ability to make people dance, with fascinating avant-garde sounds. With over 70.000 clicks, the most popular song is "La Inconformable ": it dates back to 2011 and was produced by the German Chusma Records, specialized in "urban bastard music".

The term folk-step is used in other situations as well; it regards, for instance, Alt-J, an English band, debuting this year with the album An Awesome Wave and unanimously recognized as one of the greatest hopes of Anglo-Saxon indie music. Shazalakazoo, however, refer to the term specifically for the elaboration of lo-fi dance bases: with original and snappy arrangements, these embrace sounds and melodies typical of traditional Balkan folk songs. Songs of an ancient origin, characterized by musical scales equally by East and West alike, tracing back to sounds coming from Iran and Turkey as well as England and Italy.

“The richness and diversity of cultural heritage in the Balkans are indisputable”, the band states. “The peninsula has been crisscrossed with ancient and modern trade and military routes. This allowed for unique cultural exchanges, creating a successful sound that unsparingly draws on the Region’s most primitive sounds. The region is teeming with influences of various origin intertwined with strong autochthonous traditions going back to immemorial time. These traditions are still alive today thanks to instruments that are only used here, such as the gusla (a sort of a small one stringed-guitar).”

The band also states it has embraced even more distant musical influences, such as those from Africa or South America. In any case, the duo underlines that theirs is not an artistic proposal in the actual sense of the word – as they state “it is not meant to be art”. It is, though, a way to entertain their fans by using a refined taste and style, offering a valid alternative to the pettiness of turbo-folk.

Shazalakazoo have performed in most Eastern Countries, playing in the main cities of Serbia, Moldova, Slovenia, Romania and Croatia. They have also gathered a fairly good number of followers in Germany, The Netherlands and France. As far as Italy goes, they played in Udine and Trieste in 2009 and Rome in 2012, at the Dinamofest.

The band has also taken part in numerous collaborations. Among these, the most successful took place in August this year with DJ Chernobyl, a Brazilian artist, who easily mixes electronic, rock and funk music. The first single was recently released at the cry of “Serbia-Brazil Connexion”, thanks to the work of the Down Pitch record company and the voice of Suppa Fla, the singer from Rio de Janeiro.

The band’s latest album, Karton City Boom, which follows the 2010 Speaking balkanian, is a paean to the so-called “electro Balkan” and was released with Eastblok Music, the historical Berlin major. The album provides striking atmospheres with songs such as the opening track "Opla" and more hypnotic ones like the Balkan-techno "Folkstep". The band will play these songs and others live on New Year’s Eve in Osijek, Croatia.