The traditional music of Ulaş Özdemir 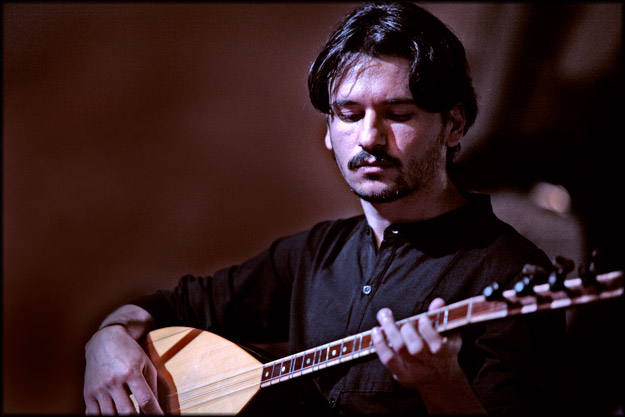 His last piece of work was produced with the Forabandit, a musical ensemble that contaminates traditional Turkish music with the lyrical and musical experience of the Provençal troubadours and Persians rhythms. Interview

Born in 1976 in Maras, Turkey, Ulaş Özdemir studied ethnomusicology at the Yildiz Technical University in Istanbul. After graduating, he obtained a master's degree in the same institution and played in many countries, collaborating with some of the most charismatic figures in the global world music scene: Ali Akbar Moradi, Kayhan Kalhor, Sussan Deyh I, Azam Ali, to name just some of his close collaborators.

Since 1998 he has recorded several solo albums and composed music for films. His musical development is critically linked with the Alevi culture, to which he belongs socially and religiously. The Alevis are the largest religious minority in Turkey; their religion stems from a particular creed derived from the Islam Shia, but is also indebted to aspects of Christianity and eastern Anatolian pre-Islamic beliefs, as Central Asia's tengriism.

We met him on the occasion of the release of the Port album, recorded in February 2014 with the Forabandit (with Sam Karpienia, French, and Bijan Chemirani, Iranian), a musical ensemble that mixes a certain type of traditional Turkish music with the lyrical and musical tradition of the Provençal troubadours and Persians rhythms, in a desire to combine the mysticism of two worlds that never met (for obvious time distance), but went through the same kind of suffering due to their religious customs, misunderstood by their fellow country-people – the Alevis and the Albigensian Cathars of southern France.

Let's start with the book by Eliot Bates, Music in Turkey, Experiencing Music, Expressing Culture. What are you doing on the cover?

Eliot is a friend and colleague. I helped him out with his PhD. When he wrote the book on Turkish music, he picked a musician he knew well.

Did you know about the cover?

He asked me, it was a nice surprise.

The lion and the gazelle 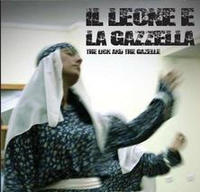 Muslims, neither Sunni nor Shia, of nomadic origin and mystical tradition – they are the Turkish Alevis. They celebrate their ceremonies with dancing, in places where men and women sit side by side. Every August they gather at Hacıbektaş, among the hills of the Anatolian plateau. To honor the holy dervish who could reconcile opposites. The DVD

THE LION AND THE GAZELLE

You also worked together in the field of music, though.

Yes, his research included some of my work and he recorded, mixed, and mastered "Bu Dem", my solo record.

And those sessions resulted in the photo for the book.

You deal with ethnomusicology too, and can be considered among the best connoisseurs of Turkish music. The topic is very broad, but what paradigms can be used to distinguish Anatolian music, from that of the western or surrounding regions?

It is still an open debate. It cannot be resolved in an afternoon.

Turkish music cannot be reduced to a paradigm, but to many historical and social contexts. One would wonder what Turkish music is, in relation to specific Anatolian or border areas.

With you in Forabandit there is also Bijan Chemirani, of Persian origin. In what way is Turkish music influenced by Iranian music and vice versa?

There has always been a lot of reciprocity between the Turkish and Iranian music cultures, also because of the trade relations that the two countries have woven over the centuries.

You are a spokesman for this artistic union yourself.

For ten years I have been working with Iranian musicians, undoubtedly the closest to my way of making music.

What are the differences between the Western and Turkish musical scale?

Thorny question. We should assess specific aspects of Anatolian music (but also Western). Anyway, there are the so-called quarter tones.

Who wrote the lyrics of the last album by Forabandit?

I wrote the songs in Turkish, Sam those in Occitan. The Kurd texts are the work of a great Kurdish poet of the seventeenth century, Ehmede Xani.

What are they about?

The port is the main theme and all our flights of fancy depart from there.

And there they return, paraphrasing the journey of true artistic giants of world culture.

A sort of concept album.

Exactly. With esoteric and exoteric references.

Where esotericism and exotericism meet.

Yes, with the image of the port, which is basically the theme of the work.

Beyond this symbolic context, why the port?

Because for many years we have gone back and forth between two major ports, one in Istanbul and one in Marseille. Forabandit means to be traveling from port to port.

It happened in 2009, on the occasion of Sublimes Portes, organized in Marseille by a mutual friend, Nil Deniz.

A project to bring together distant musical traditions like the European troubadours and the Turkish asiks.

Thus the band in which you currently play was born.

"Dil" is, in my opinion, a very powerful song. There are three of you, but it sounds like an orchestra.

It is the fruit of the firmer approach to the second album, in general more powerful and energetic than the first. More "groovy", I'd say.

Did you overdub parts?

Yes, of course, but the real "power", from my point of view, derives from the numerous sensations experienced by visiting seaside places so different and yet, paradoxically, perfectly in line with our feelings.

Which ones, in addition to Marseille and Istanbul?

How did your collaboration start with Kayhan Kalhor, a virtuoso Irani composer?

Kayhan is also a friend, that I met through Ali Akbar Moradi (Kurdish musician and composer, ed.) in Iran in 2004. We were also on tour together. I myself have worked in an album by Kalhor and Erdal Erzican (Turkish folk singer, ed.).

Returning to ethnomusicology, could you tell me something more about the saz?

In Persian, "saz" means instrument, it is the common name that traditionally designated musical instruments. Tradition, in particular, assimilates the saz to the banglama.

Can you tell me something about the banglama?

There are of very different types in size and tuning. The most common is with a short neck.

You use one with a long neck, though.

Yes, it also has thicker strings and is ideal to accompany the songs of Forabandit. But for solo music I use an old dedesazi (the smallest instrument of the family of banglama, ed.).

What do you play with the dedesazi?

Mainly traditional Alevi music, the culture and religion I belong to.

What is the relationship between Alevi music and asiks?

It is a close relationship, because asiks follow in the steps of the troubadours – poets and musicians, who cannot part with classic Alevi paradigms.

Is it true that the small saz is the favorite of street artists?

I do not know, there are also buskers who use very bulky instruments.

I have composed music for films for ten years, and I think my best work was "Uzun hikaye" (excerpt here ).

Music and film, no doubt.

I was very young and very enthusiastic at releasing my first album (here you can listen to a song ). In part, it was recorded live in studio.

Already the idea of the concept album.

Of course, a tribute to Alevi music and the musical traditions of Maras (capital of the province, located in central Anatolia, ed.).

Does it also have to do with specific anthropological realities?

Certainly those surrounding the city, primarily the sinemilli, tribes in the district of Kahramanmaras.

Who is Erdal Akkaya?

A talented musician, an expert of banglama. He helped me with my first album. After our experience together he recorded new albums, sometimes experimental, combining for example Turkish tradition with flamenco.

What music are you listening to these days?

Everything, as always. At home I have thousands of albums that I alternate with pleasure. Every day, every hour I am listening to something different. These days I'm focusing on my doctoral thesis and I easily get carried away by the positive vibes of reggae.

Ah, there are too many, many traditions distant and different from each other. It's impossible to make a list on the spot.

What is your relationship with rock music?

It was of great inspiration to me in some moments of my life and now remains very important.

Can you can name a few then?

A few anecdotes about Kahramanmaras?

Maras is my hometown. Every note I write, every word I utter – it comes from there. Even now, my family of origin lives there, and although I am almost always travelling around the world, I often go back to visit. It is a fundamental reference point for my musical roots.

I'd love to continue playing with Forabandit. At the same time I'm working on a project with a dear friend, Mustafa Kilcik (here together in a live from 2013). It is based on Alevi music, but with an experimental design, with various banglama and two voices. And I would not mind going back to work with Akbar Moradi.

The Arab-Israeli conflict has escalated again. How do you think it is possible to get out of this seemingly never-ending crisis?

I fear that in the near future there will not be great results and that, in any case, it will not be thanks to external interventions that peace will be achieved. It depends from the Israeli people, ordinary people, independently from their leaders.