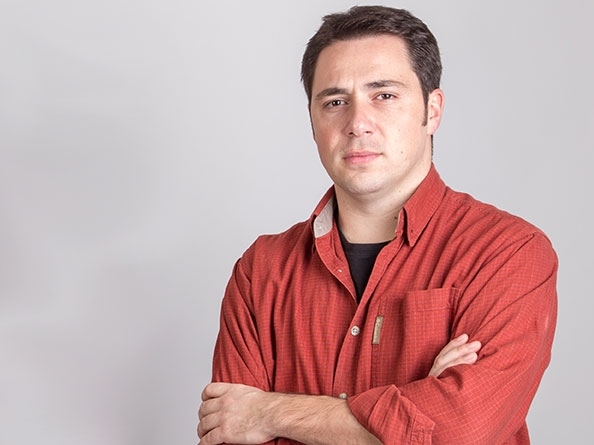 Many South East European journalists experience blackmail, threats or even assaults in their everyday work. The case of Predrag Blagojević, editor in chief of Južne vesti in Niš

Predrag Blagojević is a long-term journalist and associate of Radio Niš, Fast radio, and TV5. He founded Južne vesti in 2009 and acts as its editor-in-chief. Blagojević was awarded the Investigative journalism prize for 2010. It was the first time in Serbia that a journalistic prize was given to an internet article. He received the Dušan Bogavac award for ethics and courage in 2013, and is a member of the NUNS Executive Board. This interview has been originally published by www.seemo.org)

Did the threats you received change your life in any way?

Not really. I still feel some sort of reproach from certain colleagues, who believe I am too harsh in my style of writing, that I deserved this type of treatment or that I’m ‘too sensitive’. On the other hand, I feel pressure in the form of expectations from our readers and my office colleagues to keep up the same tempo of work.

Please list the threats or attacks carried against you or the daily.

There are various kinds of pressure, from classic financial blackmail to different tax inspections and ‘friendly advices’. From December 2013, which was the unofficial beginning of the campaign before the Parliamentary elections in Serbia, until 1 October 2014, our newspaper headquarters were visited by three inspections that lasted over four months. For over three months, during the election campaign, we worked with tax inspectors present in our offices every day.

The control of a firm with 12 employees lasted for three months. Basically, the journalists felt a dangling sword over their heads. The inspectors left on 18 March 2014, two days after the elections. We soon received a report saying ‘no irregularities were noticed’. The visit of the second inspection is actually still in motion, since we haven’t heard from them in months and don’t know what their conclusions are. The third inspection came only a day after the second one, and was to check the software system on our computers. We received a notice that on one of the 17 computers, an unlicensed program version was found. It is actually free for personal use, but must be paid 50 euros for professional use.

To be completely clear, we support the work of tax inspectors and their persistence in abiding the law. But the amount of ‘attention’ they give us almost daily has caused some doubts. After our refusal of an offer to give two-thirds of the advertising space on our website to the ruling party, we received direct threats that it would be publicly said in the Parliament that “the owner behind Južne vesti is the businessman Miroslav Misković”. As a special method of pressure, I have to mention a few occasions when city officials offered us ‘cooperation’ in the form of a certain amount of money from the state budget if we made our investigative stories more ‘subtle’ and literally censor some of the comments.

Still, I’d like to point out that financing certain media outlets with taxpayers' money is one of the biggest problems we have. Through hidden contracts, signed with no criteria whatsoever, the local government in Niš sets aside hundreds of millions per year of Serb dinars in payment for these PR services. The problem is that this is fifty per cent, and even up to eighty per cent of the overall yearly budget of those media outlets. Through this direct ‘state aid’, the advertising market is being ruined, because these outlets are endorsed to ‘dump’ prices, thus putting direct pressure on the financially independent media to lower their advertising prices too, even under the level of where it pays off financially.

Do you have any advice for journalists who might experience physical assault? What should they do if they are attacked?

Južne vesti has one basic rule that is used in our local language: “Finger in the eye, fist in the teeth”. Chances are, you will experience for the first time what it means to truly be left to yourself. There will be many who will pat you on the back, encourage you, and compare you to the most famous journalistic names. But eventually, it’s you and no one else who can decide how it will all end.