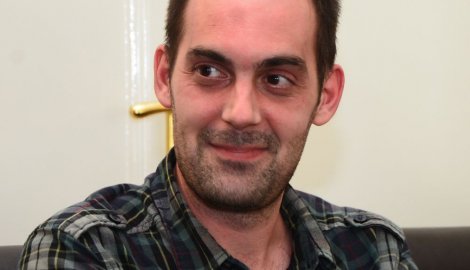 Berislav Blagojević (1979) is one of the most brilliant and versatile voices in the new literature from Bosnia­-Herzegovina, and the author of Quieter than water [Tiši od vode, 2013]. Interview

Danilo Mišić is a quiet geographer who is suddenly thrown into the mud of a fratricidal war. During a military operation, he commits a trivial, yet tragic mistake in reading maps, which stems a bloody friendly fire and marks him forever. Affected by a crippling, delusional post-­traumatic stress disorder, he is transferred from the battlefield to the no less absurd realm of a psychiatric hospital, a prisoner of his own mind, left to his own devices by negligent, sometimes corrupt doctors. He clams up in a blanket of impenetrable silence, and only communicates with the rest of the world through an imaginary correspondence with his homonym and mate in destiny, Russian writer Daniil Kharms. To him, Mišić relays thoughts and meditations, in an unstoppable flow of dialogue where everyday life is full of paradox, each value system is subverted, and the common man is reduced to an unwitting perpetrator of evil. A portrait in a mirror of a lucid, suffering visionary, punctuated by the drumming of Pearl Jam and accompanied by the onyric Pink Floyd symphonies, with the counterpoint of Bob Dylan and Leonard Cohen ballads.

Danilo Mišić is the anti-­hero of Tiši od vode [Quieter than water, 2013], an intense, surprising novel as well as a rigorous reflection on trust in others, freedom of choice, and the moral degradation of the persistent, collective discomfort called "transition". A requiem on war, in which all are victims indiscriminately; a bitter, sometimes grotesque sketch, without any ideological screen on the absurdities of the post-­war period.

Author Berislav Blagojević (1979) is one of the most brilliant and versatile voices of new literature from Bosnia and Herzegovina. Born in Slavonski Brod, he had to deal with war when he was not even a teenager. With the escalation of the conflict in Slavonia, his mother entrusted him to a neighbour, a Muslim, who took him in his car and, passing him off as his son, managed to evade the checkpoints and keep him safe with relatives in Doboj. It was the early months of 1992. Today Berislav lives in Banja Luka.

In the novel we find the same rarefied atmospheres, the same suspension over an abyss of silent expectations and ordinary resignation that pervade the verses of the collection “Trebao sam biti riječ” [I was supposed to be a word, 2005] and the stories of “Revolucionar” [Revolutionary, 2010­-2012]. One of the latter was selected as best short story in contemporary Bosnian fiction and included by one of the curators, artist Mladen Miljanović, in the catalogue-­anthology “The Sea Is My Land” (Feltrinelli, 2013, pp. 178­-180), available in Italian under the title "La fuga".

We do not know – and never will – on which side he fought, which cause or flag he found himself forced to support. There are no details to reveal that. We can only say that Danilo Mišić is the accomplished metaphor of today's Bosnia and Herzegovina. Locked up in jagged boundaries drawn by others, where the compass slavishly followed the trail of blood and reproduced the geometry of the executioners; embroiled in an abstruse constitutional framework and an administrative structure shaped by an insane logic, the country lives in adamant, permanent immobility. 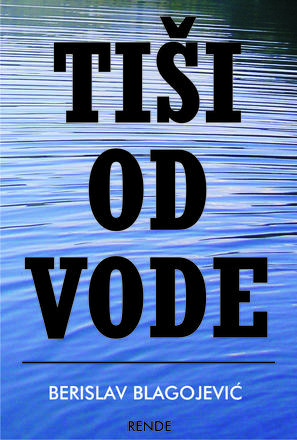 A negligent, mostly corrupt political class, a giant, diabolic bureaucracy, and an economy dependent on foreign investments of opaque, sometimes illicit origin take care of a quiet, docile patient, prey to the nightmares of the past and the static agony of the present, that can only counter smug, ironic fatalism with an imaginative instinct to escape. A chronic patient dazed by damnatio memoriae and by an evergreen rhetoric of identity, that consumes its suffering on its own remains, and from those remains awaits in vain to be reborn like the flight of a phoenix. If Danilo's inclination to flee finds a practical outlet thanks to a sudden surge of professional ethics in one of the psychiatrists who treat him, and leads him to rediscovering the lost serenity, we wonder which doctor will ever be able to heal Bosnia and Herzegovina and indicate a future of stability and prosperity.

We take advantage of the recent general elections to put some questions to Blagojević, between politics, society, and literature.

How much are your personal history and your own experience hidden behind Danilo Mišić? And which role does the war play in your literary work?

Since Danilo Mišić, the main character of Tiši od vode, is nine years older than me, obviously there are some memories and experiences that are not mine. For example, I didn’t study literature, or translated Kharms, or participated in war actions. He is a character of fiction, but he embodies a widespread way of thinking and of living – or, rather, surviving – which became mainstream in the aftermath of the war. There is no doubt that the war changed all of us, no matter what nationality or age or social status. And it seems to me that even today, 19 years after, people still measure time in a specific way – before and after the war. That is why sometimes I choose to return to warfare as a literary subject. War is not my main literary preoccupation; however, quite a few short stories I wrote are dedicated to this topic, as well as the novel Tiši od vode. But Tiši od vode is more focused on what happens after the war than on war itself. In a way, when I think about it, some short stories that deal with numerous socially delicate issues are actually tackling the subject of war, because if the war didn’t happen our lives would be different. In conclusion, I could state that the war plays a noticeable role in my literary work, but I’m not obsessed with it. I am rather more interested in all the absurdities and changes that came after the war.

Waiting for the ultimate counting of votes and the final results, we may say that from the recent elections a “new, old Bosnia” is emerging...

I’m not comfortable with commenting political issues since I’m not an expert. Politics, especially on a daily basis, is something pretty strange for me. You may agree, however, that the post­war transition, in this country, seems endless...

One has to understand that the ‘national interest’ is somewhat of a sacred thing here, an overwhelming political mantra on all sides. Every change, through the political system or non­governmental organisations, is considered as an attack on the ‘national interest’. The political elites want to preserve an everlasting status quo, a state of crisis and fear, because it is easier to rule in such an environment. Some might blame Dayton, others the International community, some might blame the local politicians or the EU bureaucrats or the large businesses. Everyone might be right. However, if democracy really exists in these parts of Europe (and I wish to believe it does), then we, the people, are even more guilty. In my opinion, although the situation in the country is hard, we haven’t hit rock bottom yet. When that happens, changes will come, because hunger does not recognize ethnicities.

Do you think that Dayton’s geopolitical order will remain unchanged in the next decades or that the Bosnian current borders and internal lines will be redesigned? In this case, by peaceful means or through new conflicts?

You mean geopolitical disorder? I really can’t speculate. All I can say is that a country in this state is not functional, and that is consuming a lot of energy and money through the administration and a confusingly complicated apparatus, giving almost nothing in return to its citizens. And yes, what ever happens, I’m praying for peaceful solutions.

Which role do writers play in the Bosnian current framework? How far can they represent a driving force for change?

Unfortunately, it seems that the power of literature is overemphasized. Older people change their views and ways very reluctantly, while the youth are not interested in the written word. Moreover, there is always a kind of self­-censorship and censorship. For instance, although Tiši od vode is an antiwar novel, some media from Sarajevo refused to talk about it (others, like “Oslobođenje“ or “Dani” did!). And vice versa – in Republika Srpska there is a lack of information on what is going on in the literary scene in other parts of the country (naturally, there are personal writer-to-writer info and book sharing). I really do not know the reason, but I think that in this kind of environment, a writer has a very narrow space to act. Like everything, the literary associations or societies are also divided on entity or national level. Of course this is not a rule, but...

Despite a new, very interesting and prolific generation of writers, the only two well-known Bosnian authors in Europe are Miljenko Jergović and Aleksandar Hemon. Both of them abandoned the country during the war, the latter even writes in a different language. Which are, according to you, the reasons for this marginalization?

This is more the consequence of a destiny of ‘small language(s)’ than of other possible reasons. Even some very well known authors from the Yugoslav era are not recognized in Europe. The other reason is that war, or post-­war stories/novels, are passé, Europe moved on while we are stuck with our demons. People outside the Balkans are not interested in reading this. One more reason perhaps is that former Slavic departments in universities abroad (now mostly for Croatian and Serbian literature and language) translate only contemporary authors from Croatia and Serbia.

You are a Bosnian Serb, belonging to a community which doesn’t recognizes herself entirely in the State it belongs to, but which is considered just as a peripheral reality by Serbia. How much does your literary engagement and work gets affected by this situation?

I am writing in Serbian, my publisher is from Belgrade and without any doubt I consider my work to be part of the Serbian literature and culture. Of course, since I’m living in Bosnia, my work belongs to the Republika Srpska and Bosnia and Herzegovina literary scene. I don’t think about this very often, to be honest. My job is to write the best I can.

Except for Tiši od vode, you are used to set your stories in several places, from the US to Georgia, from England to Germany. Is it because of the professional deformation of a geographer or for a narrative escape?

A little bit of both, I suppose. I like to use my knowledge in Geography to set my stories elsewhere, but just to point out that human destinies and experiences are or might be universal. In a way, I’m trying to shrink the world, to show how love, suffer, war, betrayal, poverty, etc. are to be found in every corner of the planet. However, there are parts of the globe that I find very interesting and close to my heart – like Georgia and the Caucasus region in general. I wrote quite a few stories about these areas (even Danilo Mišić from Tiši od vode found his inner peace in Batumi, Georgia!), not just to write about ‘exotic’ places, but using the Caucasus as an analogue space to the Balkans. Historically, ethno-demographically, religiously, politically, the Caucasus and the Balkans are more alike than one might think. So, sometimes when I write about Georgia, I actually write about Bosnia.

Have you ever thought about leaving your country, to try your luck elsewhere and to make the most of your literary work and career abroad?

One has to understand that although very inspiring (for all its good and bad characteristics), this country doesn’t care much for its artists, and does not provide the basics for those who wish to live and create without obstacles. So yes, I think about it every single day.