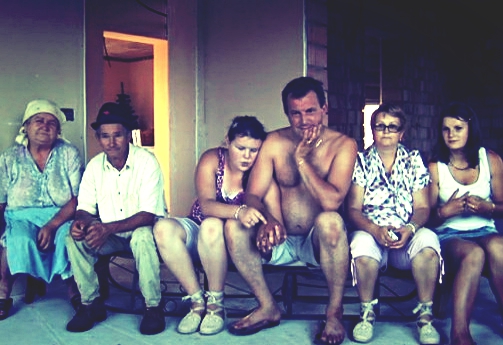 In her documentary "Aici... adica acolo", the journalist and director Laura Capatana addresses the issue of children left behind in Romania leading us through the daily lives of two teenagers

Why did you decide to cover the issue of children left behind, children whose parents have migrated abroad for work?

I started working on this theme in 2007, when I was a journalist for several German newspapers. As a journalist I mainly focused on highly dramatic cases, children who had committed suicide or who had had problems with the law as a result of their parents' migration. At that time I travelled all over the country, especially Transylvania. For about six months, I met and talked with so many families, children, and even sociologists, psychologists, and social workers who took care of the so-called children left behind.

The phenomenon is widespread in Romania and there are many children who have one or both parents abroad. During this research I realized how these children are generally "normal" children, only some of them are special cases, such as those of which I wrote in my articles, but all are united by a sense of emptiness and sadness.

This stemmed my interest in better understanding this feeling of emptiness, because their lives reminded me of part of my experience as a teenager: at 14, I left my parents' home to study in another city; I remember how much I missed them. I wanted to figure out what these teenagers think and give them a voice.

In my documentary I wanted to tell the life of a normal family, a family in which parents left for Spain when daughters Sanda and Ani were still little. At the time when we shot the documentary the girls were teenagers, they lived with their grandparents, went to school, and had no particular financial problems. A situation that enabled me to focus on their emotional state.

How did you manage to get so intimately into the family life of Sanda and Ani? I imagine it has not been easy, since this is such a sensitive issue.

Finding the right subject, the right family, was not easy. People were afraid that I could talk about them like one of those cases that you hear about on television, special cases, which cannot represent the situation of all children whose parents are away.

One day, just when I was discouraged and was about to abandon the idea of shooting the documentary, I saw a clip on YouTube. A group of teenagers, under the guidance of a professor of theirs, had shot a little film that told the story of a teenager who, following the departure of parents abroad, decides to commit suicide. So I contacted the professor of this school in Sighet, where the percentage of children with parents abroad is very high. The professor was extremely cooperative and opened me the doors of the school. I went to Sighet and we decided to organize a workshop with a group of eight teenagers who had parents abroad.

I taught them how to use a camera and explained to them that I was going to shoot a documentary on that, and slowly I became their friend. I would stay in Sighet for two or three weeks, then I would go home, and then back to them for another two or three weeks.

One day Ani invited me to the house and there I also met her older sister Sanda and their grandmother, and immediately there was great feeling. I then asked their grandmother if we could check with the parents of Sanda and Ani for permission to shoot the documentary about their family. Half-jokingly, the grandmother pointed out to me that, even if the parents gave their consent, she was the one I had to check with, not only because she would actually appear in the documentary, but especially because she had been the one who had raised the girls.

The grandmother is a central figure in the documentary...

Their father left for the first time when the daughters were 4 and 8 years, and later the mother left too. The parents worked a lot in Spain, with the goal of finishing the construction of the new house which is adjacent to their grandparents'. But the house was not finished, years passed, the daughters become teenagers, and parents were still far away, working a lot, and never fully realising their daughters' pain, because they were not there when they cried or when they had moments of sadness.

When their parents left, the daughters were very little, they just found themselves in this situation and did not have any say in the parents' migration choice.

On the other hand, their grandmother is the one that understands everything, because she sees her nieces everyday and feels their sense of emptiness. She realizes that such a big house is perhaps not so essential and that finishing it will take a long time, time in which the daughters are growing up and becoming women. Often the grandmother complains when they get packages with gifts, and realizes that sometimes the money is being spent unnecessarily and inappropriately, because the price of those gifts is the distance from the daughters.

In the region of Maramureş there are many large houses, often empty. The people in this area are very proud and so for them it is important to show the neighbours that they also have a huge house. However, almost no one actually lives there.

May I ask whether the parents, as far as you know, have ever thought about taking their daughters to Spain with them?

Yes, they would have liked to, but then they realized that they had to work very hard and the daughters would be always alone, and therefore decided to leave them at home with their grandmother.

What did the parents do before they left? Did they manage to live a decent life?

Both worked, but surely it was difficult to live with dignity with their pay.

How did the parents react when they saw the documentary?

In 2012, when I finished the documentary, I showed it to the family of Sanda and Ani first. At that time, the parents were in Romania too, as they had returned from Spain for the holidays. During the documentary, the father was silent all the time, while the mother laughed, especially at the most painful scenes, trying to somehow compensate for the emotional tension in seeing the suffering of her daughters.

Did they all move together into the new house?

No, that has never been finished, all continue to live in the grandparents' house. The father found employment in the timber industry and the mother works at IKEA. That big house is empty. Ani especially spent a lot of time in that house, while the parents were away. Often alone, often sad – so she asks: "But when does the moment come when we are going to live together in this house? Perhaps when we are already adults?".

Paradoxically, what represents the cause for the separation is the very symbol of the family unit. That house is likely to never be finished. Now that the parents decided to return, the daughters are starting their own independent life.