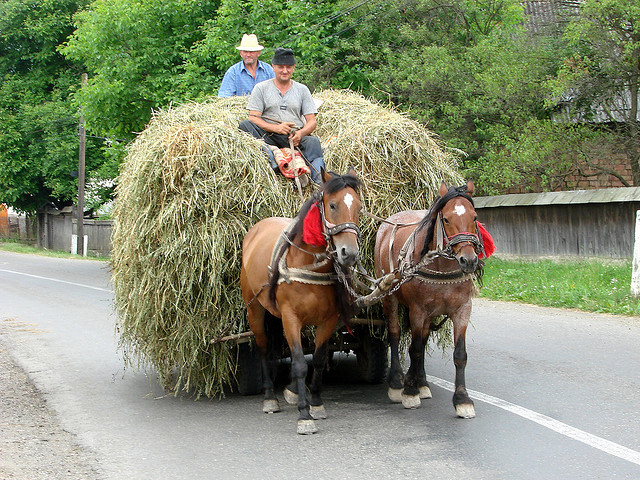 In the past years, for many Romanians (mainly from rural areas) emigration represented an opportunity for economic and social redemption. Today, the world economic crisis has changed people's perspectives, but going back to Romania does not look like a likely choice and the future is full of uncertainties

“It’s really tough out here. We work more and are paid less… thirteen and fourteen-hour shifts in refurbishing have become normal. My brother and I are lucky to still have jobs here and there in Madrid. However, I don’t think we can afford to travel home this summer. It’s the first time in seven years that we don’t do that. We always kept our spending to a minimum; we bought the cheapest food and did not buy a flashy car, even when the times were good. We saved to build a house back in Romania and have money for a rainy day. But now we barely earn enough for an overcrowded apartment, food and two hundred euros a month for our family back home.”

Nicu Pop has always been intoxicatingly optimist and this sullen talk was not really his cup of tea. His mates always used to make fun of him for how upbeat he always was. However, things are dark enough to reduce the expectations of even the most resilient Romanian construction workers in the formerly booming Spanish and Irish construction sectors. With these countries groaning under fiscal austerity and with their cityscapes littered with empty newly built housing, it’s clear that construction jobs, the favourite labour-market niche of Romanian migrant workers, will never come back.

“For years I worked overtime and was ready to eat ashes, if the employer so demanded. It’s all falling apart now and I have no idea what to do. Some say we should go elsewhere in Europe, but my only connections are in Dublin. Furthermore, there’s no work elsewhere. Maybe they should round us all up and send us home, so we don’t have any illusions about how much we count here.”

Myths about the rewards of hard physical labour have crumbled among this largely rural population of young men whose only work experience before migration had been back-breaking farming in a Transylvanian village or long commutes to subsistence, industrial-sweatshop jobs.

Yet, the withering of job opportunities in Spain and Ireland has not triggered massive return migration. On the contrary, according to government statistics, almost half a million Romanians filed applications and 140,000 secured labour contracts in Western Europe through the government employment agency. While Italy and Spain were the standard destinations during the past decade, in 2010 most of those who left Romania entered the British and German labour markets, with agriculture taking most of the inflow.

Why do people still leave and why haven’t the unemployed and underemployed immigrants returned? First, most Romanian migrants departed from rural regions where they faced the ills of subsistence agriculture, extremely low and short-term unemployment benefits, poor access to public services and extreme scarcity of waged employment. As difficult as life can be in immigrant tenements in Barcelona or Dublin, at least there are recent memories of economic success that immigrants can draw upon to maintain their resilience through the crisis.

Moreover, in Western Europe immigrants can navigate the crisis through a combination of decent levels of unemployment benefits and excellent access to healthcare, none of which are decent in Romania. In addition, tens of thousands of immigrant families have children who were either born in their destination countries or have gone to school there.

In contrast, while socially rewarding, village life in Romania offers little hope. During the past decade, the typical interaction between labour migrants and their home communities would take place in August and late December, when villages and small come back to life as migrants fill local pubs, work on their large houses and parade their newish cars.

Returning to the same place in mid November or early February is a different affair. As Tabara Marin, a sacked truck driver who spent five months on unemployment in Spain commented wryly, “Me and my wife lived in a cramped tenement in Almeria (Spain), working crazy hours and so on; then we both lost our jobs and found nothing, no matter how hard we tried. We thought we would weather the hard times by cashing in our benefits and living back in our native village. However, I almost became suicidal after a month of braving the deep mud in the street and living in a place where the average age is around seventy and the best available job is farm work for a local thug that pays six euros a day. Therefore, we are going back to Spain. At least there we can hope that the crisis will pass and we will get a job; whereas here, even if boom times come back, the jobs pay nothing, the local hospital looks like a death camp and the school is falling apart.”

Since the beginning of Romania’s economic modernisation in the 19th century, industry and services could count on a large reserve army of cheap labour in the villages. This was especially the case during Romania’s experience with (neo)Stalinist economic development, when even breakneck growth in industry left almost half of the population in the countryside.

During the past ten years, the southern European and Irish real estate booms benefited from the influx of almost two million young Romanians, most coming from villages but willing to work for low wages and equipped with at least ten years of education and some exposure to vocational training skills. Now the real estate bubble has burst and their home country offers them little beyond very low wages and a systemic dismantlement of workers’ rights. The most dynamic of Romania’s rural youth face a long and disheartening slog towards even more uncertainty and precariousness.

As Nicu Pop puts it, with a sarcastic smile, “After the jobs and the unemployment benefits run out for people like us and after our savings run out, we will have no choice but go home, without illusions, and cultivate the land, like our grandparents. It’s not really what we had in mind all these years but at least we will eat organic tomatoes and eat meat without chemicals, like only the wealthy people in Madrid can.”