Romania: will the 'mamaliga' explode? 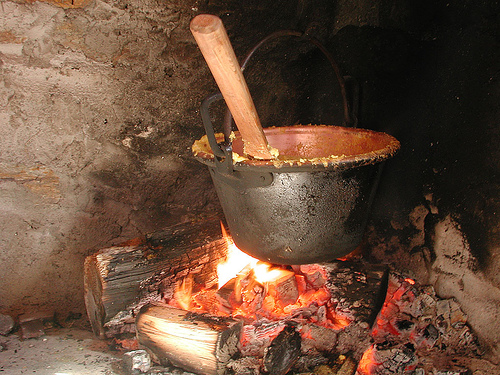 Romania continues to be one of the poorest countries in the EU. The international crisis causes a rapid worsening of conditions. The Romanian political elite concentrate, above all, on more centralisation of power. A weak civil society desperately struggles to be heard

Chaos and a feeling of impending catastrophe characterise Romania’s current political and social situation. The global crisis has brought the worst times for Romanians since the dark days following the 1989 Revolution, when resources were scarce and a fearful, uncertain people, desperate for leadership, saw a new political elite emerge.

The economic recession that began in late 2008 evokes memories of the late 1990s. Today, continuing layoffs result in rapidly growing unemployment. Around a million people (or 10% of the labour force) are currently without a job.

Meanwhile, massive and persistently organised strikes attempt to protect decreasing salaries. In contrast to the empty shops of the early 1990s, the shelves are now full of goods; but this brings little comfort, because few people can afford anything. Inflation remains almost inexplicably high at over 4%.

Policies, apparently approved by the International Monetary Fund (IMF), are being promoted by Prime Minister Emil Boc’s centre-right cabinet to fight “stupid” salaries and pensions. However, economists and unions say these measures will only lead to a drastic decrease in wages and pensions of those already living on the edge of poverty.

At the end of March, IMF Managing Director Dominique Strauss-Kahn sharply criticised Romanian politicians for trying to evade responsibility. He warned that the government must deal with the unemployment that will continue to rise in 2010.

A new IMF delegation began a visit to Romania on 27 April to put additional pressure on the authorities to implement reforms in the public administration and pay long overdue arrears to the private sector, which should create jobs and increase budget revenue.

Most macroeconomic indicators keep worsening and people are increasingly dissatisfied with their slumping living standard. On 22 April, roughly 80% of the teachers across the country participated in, or expressed solidarity with, one of the largest protests organised by their guild.

Aside from remuneration issues, teachers complain that the new education bill will create a less qualified workforce. At the same time, students protest against decreasing or abolishing of a number of benefits, including transportation discounts. The state’s decision to fund private universities is considered unjust by both professors and students.

To try fighting reduced pensions, wages and education laws, unions have recently announced even heavier and more massive strikes through May and June.

Against this background, daily media reports continually uncover the wealthy lifestyle of top government officials, such as Economy Minister Adriean Videanu, and the rising salaries of select categories in Romania’s administration. Some media accuse government executives of attempting to divert attention from their incompetence and wrongdoings.

Meanwhile, reforms are stalling. The European Commission in a report on 23 March indicated clear dissatisfaction with stalemated reforms in the judiciary sector.

Poor infrastructure and even poorer management of European funds meant for its upgrade are still a major impediment for local business development and foreign investments. At the end of March, for example, Transportation Minister Radu Berceanu acknowledged that, due to lack of sufficient funds, no new motorways will be ready in 2010.

Moreover, at the end of April, Amelia Antoniu, 36, prime soloist at the “Ion Dacian” National Operetta Theatre, went into a deep coma in a Bucharest hospital after undergoing minor surgery. Her case reminded people of the vast shortcomings of the Romanian healthcare system and stirred a heated debate throughout the country.

Many believe these conditions could cause an “explosion of the mamaliga”, an allusion to the traditional Romanian dish polenta, left boiling too long on fire, meaning a nationwide uprising of the people pushed to the limit of survival.

At present, state actions practically depend on the tacit or expressed approval of Băsescu, as the informal leader of the ruling Democrat-Liberal party. He is regarded as the omnipotent godfather of the current government.

The government recently suggested constitution revisions. Analysts and political opponents, such as former Prime Minister Adrian Năstase of the Social-Democrat party, claim these changes would eventually lead to a dictatorship. The executive branch seeks to move from a bicameral legislature to a single chamber and slash the number of MPs to a maximum of 300. The head of state would also secure additional immunity.

Ironically, Băsescu had the transition to a unicameral legislature approved by a referendum on 22 November 2009, the day of the first round of the presidential elections – elections in which he won a second term in office. Furthermore, he won with his most successful and populist argument: he is the single opposition of all the wrongdoers and the ruling class.

During the electoral campaign, he did not tell the electorate that he wanted to eliminate the senate chamber, the only institution where the political opposition still holds an important presence. Furthermore, he did not say he wanted to strengthen his immunity, become invulnerable to impeachment and be able to dissolve the entire parliament at will.

A political science professor, Daniel Barbu, recently noted that careful calculations indicate that although the majority of those who voted at the referendum approved the changes in the parliament (almost 90%), in fact these represent a fraction of all citizens with the right to vote. Many potential voters did not agree that changes are necessary or did not consider the issue relevant and simply did not go to the poll.

“What we have today is both bad politicians and a bad constitution,” Barbu said. He added that Romania needs an entirely new constitution and not one with countless alterations created solely to suit the government in office. Cristian Pârvulescu, dean of the National School of Political Science and Public Administration, criticised the attempts of the ruling class to rush through constitutional alterations.

According to critics, Băsescu’s authoritarian populism will eventually become obvious and be a two-edged weapon for Romania’s president. Journalist and political analyst, Cristian Tudor Popescu, suggested Băsescu will eventually remain alone, abandoned by his own party and his voters, “exactly like Ceauşescu was in 1980s.”

Indeed, the rising poverty or attempts for marginalising of democracy could cause the civil society to eventually rebel against its rulers. Rebellion because of poverty would express a primal struggle for survival; revolt against rulers would demonstrate a political maturity seen in Bulgaria in 1997, in Hungary in 2006, and even in Moldova, in 2009. Unfortunately, an uprising seems the only workable scenario for Romania today.