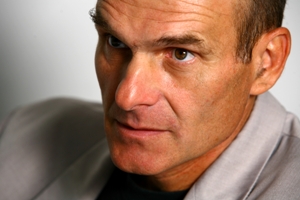 Osservatorio met Cristian Tudor Popescu, a well-known Romanian journalist and political analyst, to talk about the media, freedom of expression and the forthcoming presidential elections

Cristian Tudor Popescu is one of the most respected intellectuals of modern-day Romania. Essayist, journalist, political analyst, film critic, former chair of the Romanian Press Club, he has hosted talk shows for various television stations, and contributes to Romanian media as a literary critic and translator. Popescu was the editor-in-chief of the daily Adevărul before founding the Gândul newspaper in 2005, where he is now a senior editor.

Mr. Popescu, aside from the economic stagnation and the obviously difficult situation amongst the working population, what effect has the global financial crisis had on the journalistic environment in Romania?

A crisis had begun in journalism in Romania before the financial crisis struck - this domain had already suffered significant negative changes in recent years. The financial crisis only emphasised the weaknesses of the journalistic guild. Currently, in Romania, being a journalist is a profession increasingly close to a mere provision of services; it has lost the panache it used to have some years ago - that of a special, noble craft, involving all sorts of ethical issues. Deontological concerns have become a synonym of disgrace to journalists today. And, along with this background, there are, of course, redundancies, both in printed media and television, but especially in the printed media, which is most affected by the crisis. Normally, people find refuge on the Internet, while journalists - many of them - have dropped the news-reporting job and left the business. Some have changed - sadly - from long-time investigative journalists to spokespersons of some more or less untrustworthy tycoons.

In one of your latest editorials, you talk about how everything is now about good ratings. Has the media in Romania always behaved in this way, or is this a side-effect of the crisis, a way to guarantee an audience?

In recent years, this journalistic behaviour has been emphasised - especially in television where it is about ratings: to seek audiences at all costs. Nothing is forbidden in order to achieve high ratings: healers, corpses, kangaroo riders can be brought in the studio. An earthquake occurs, it fills us with joy, and then it fills us with sadness because nobody died. The earthquake that shook Romania at the end of April was only five on the Richter scale and no building collapsed. Despite the insistence of the TV hosts, seismologists were unable to deliver the desired apocalyptic landscape. This is a deformed attitude. And so, the quality of information for the public is no longer of interest: of interest is only the number of viewers. Everything is excused and justified by the ratings. Where we will go in this direction, is difficult to predict. In any case, the quality of the audience that consumes the media constantly decreases and so does the quality of the journalists who produce this media.

Is there a solution to this situation, can we do something?

No. We are in a free media environment, where commercial television stations exist - and they are doing what each thinks fit. I do not believe in forced regulations, forced legislation in this moment, passed by parliament and imposed on the press. One solution would be self-regulation. That would be one way. Another way is a natural saturation, which we can expect. A certain level of colourful, televised pervasions may have a natural limit, beyond which things would not be allowed, and there may come a recession. Otherwise, I do not believe in very harsh laws regulating journalism.

In this respect, what is the place of independent media, the "blogs"? To what level have they developed?

Blogs are not journalism - let it be very clear. For me, this distinction must be made at all times. They are a creature of the journalistic environment. They occurred in this very good context of free circulation of information, free informational manifests, so they are real. You must keep in mind that they may be useful in times of great crisis, like the one in Bessarabia (Moldova) in early April, these blogs worked when official and semi-official channels to transmit information were blocked. It is important, because we know that information cannot be blocked by any dictatorial system as long as they are in Internet. However, they cannot replace professional journalism.

You mentioned dictatorship. In these times of crisis, are the risks higher of installing such a system, such an authoritarian regime?

No, in no case can we have a type of Ceauşescu regime, an authoritarian or dictatorial regime. But now, more sophisticated methods can build a dictatorship that is not so visible: constructed by electronic means, some liberties can be smoothly cut. In this respect, the Internet remains the main weapon, as a possibility for free communication. In the 1920s and the 1930s, when the big dictatorships were possible in Europe, the most sophisticated medium was the radio, since there was no television. Great dictatorships of the twentieth century were built with newspapers, leaflets, and the radio. That is why they were able to control millions and millions of people by implanting a parallel reality in their heads. Now targeting, selecting and distorting information to control humans in a dictatorship is no longer possible.

Yes, but there are still laws that can be modified, legislations can be reconstructed.

No, there are some limits, because we are members of the European Union, of NATO. When we would take such a measure, the authorities in Brussels would react immediately. What can be done, can be hidden, but not by some explicit laws that prohibit offensive comments to the state. However, in the minute in which such a law is introduced with a punishment of five to ten years imprisonment for offending the authorities, for example, in that very moment all the international bodies, press agencies, institutions in Brussels would react immediately. There are still some human rights to be respected.

I am asking you, because the government in Sofia recently drafted a law prohibiting protests and manifestations around public, government and military buildings, hospitals and national roads.

You have to raise your voice in this kind of situations. In Romania, such a law would not be possible. They tried to attack the press in Romania by amending the civil code to limit press freedom; both journalists and non-governmental organisations reacted sharply. They went as far as the president and protested; they appealed to international organisations. So first, you must have this reaction of the civil society.

Speaking of the president, I would like to have a few words about the forthcoming presidential elections this autumn. Traian Băsescu has the right to seek election to another term. What are the expectations that he will be re-elected?

At the moment, according to latest polls, if elections were held tomorrow, Băsescu would win the first round. However, we would still have two rounds. What would happen in the second round, however, is hard to say.

Would something change significantly if he is re-elected?

No matter which person will be elected president in the autumn, fundamental changes in Romania will not happen. Even if Băsescu remains or if someone else comes, that person will not make changes in what is going on in Romania. Now the unnamed prime minister is Mr. Băsescu - in fact, he built this government, and practically conducts it. As with the U.S. executive branch, the president is the head of the government, he practically leads. Mr. Emil Boc has faded almost completely.

Moreover, wouldn't the current government fall, given that Băsescu is a kind of unifier for its parties?

It would not necessarily break the government. I was saying that is not important who will be president because certain political forces in Romania right now, cannot alter their configuration in the next few years. So, let's say one of the current political parties in power, the Social Democrats (PSD) or the Liberal Democrats (PD-L) would leave the cabinet - well, the National Liberals or the Democratic Union of the Hungarians in Romania may replace them - that will not change things in a decisive manner.

How would this happen?

Agreement between parties for a no-confidence motion in parliament may cause the government to fall. The composition in parliament will remain the same, but that of the government may change, depending on the outcome of the presidential elections. What is essential is percentages won by each candidate in the first round. Because if the two contenders behind the leader jointly gather more votes than Băsescu, an agreement between the two is inevitable in the second round and Mr Băsescu will probably lose. This will be much like the case of Ion Iliescu in 1996 when he won the first round, but the two behind him in the results, Emil Constantinescu and Petre Roman, came to an agreement and Ion Iliescu lost the vote to Constantinescu.

Is there a new Emil Constantinescu today, someone who could beat the establishment, such as in 1996? For example, the candidate of the Liberal Party, Crin Antonescu?

Comparison with Emil Constantinescu is not good. Crin Antonescu is different. Constantinescu became president based on other considerations: there were political considerations, the past of Romania was invoked; the historical parties were remembered. Now, these are forgotten. Of course, Crin Antonescu and the other major candidate, Mircea Geoană, each have their chance to gather a percentage of votes that may be important. I do not think they will successfully overcome Traian Băsescu in the first round. Again, it depends very much on their total results and the calculations that can be made later.

So, politics are now purely made of calculations and interests. Is there anything ideological to it?

Absolutely not! Romanian politics are completely de-ideologised; no one is interested anymore in doctrines or platforms or anything like that. Any relationship is possible, as you have observed. In the 1990s, there were doctrinal barriers; certain partnerships were inconceivable! This also was true in the press: newspapers were battling as if in trench warfare, people were not leaving a newspaper to go to the other - for it was an ideological struggle between them. Now journalists migrate where there is work. They don't care if they are working in this media or the other. Until yesterday, somebody would write editorials and conduct fierce investigations against a particular tycoon and, the day after tomorrow, for a considerably higher remuneration, would commit himself, with no problem, to the media owned by the same tycoon. This is also now in politics - any combination is possible if it brings votes and allows access to power and brings money.

And resources. That's all there is to it.