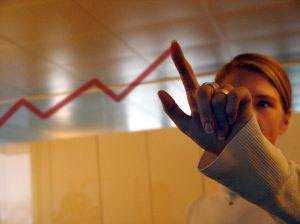 The Romanian economy probably will remain in recession for most of 2010. A 20-billion-dollar rescue package from the IMF, World Bank and the EU will only try to serve as a macroeconomic stabiliser instead of as a stimulus package that could help Romania stop its economic tailspin

With livid faces and a language unusually pietistic for their profession, Romanian central bank officials recently confirmed the fear that the economy, after shrinking by 7% in 2009, will remain in recession for most of 2010. Tax receipts and immigrant remittances continue to fall. In 2009, foreign investment flows collapsed precipitously to half of their 2008 levels.

Unemployment doubled in one year and threatens to affect almost a million people this year. Wage cuts have become the norm throughout the private sector and the disaster of the Spanish housing market means that the solution to joblessness is no longer at the end of a 36-hour bus ride to Barcelona or Madrid.

Some parts of the economy held their ground, however. Not only did the banking sector survive without bailouts, but also the country’s (foreign-owned) banks reported even higher profits in 2009 than in 2008. Romania also remains attractive to foreign investors, largely because the crisis reduced the wage expectations of Romania’s skilled, polyglot and adaptable labour force. A recent A.T. Kearney global ranking of countries in terms of their attractiveness to foreign investment placed Romania on the 16th spot. Boosted by cash-for-clunkers programs in Germany and France, the exports of the Romanian car manufacturer Dacia and of its numerous suppliers continued to grow.

The Great Recession struck Romania hard in 2008 and caught the country unprepared. The adoption of pro-cyclical measures like a flat tax of 16% in 2005 (in effect, a big tax cut for the upper middle-class) had fuelled a consumption binge for imports, putting trading balances at a deficit and leaving no resources to shield the economy from the coming economic whirlwind. Falling demand in Western Europe led to a sharp drop in Romanian exports. The real estate bubble denominated in hard currency burst and everybody feared a systemic meltdown of Austrian-owned banks in Romania.

The Romanian government was convinced to seek an IMF-World Bank-EU bailout after foreign banks threatened to withdraw money from their Romanian subsidiaries, which would lead to reduced ratings for the country’s treasury bonds, low levels of public savings and an avalanche of foreign debt payments due in 2009.

The 20-billion-dollar rescue package “calmed” the markets, but came with the usual strings attached. Moreover, the strings are tight and have double knots. The Romanian government must push through austerity measures, including cutting its budget deficit to 3%. Less hawkish than during the 1990s, the IMF and the European Commission demanded that the budget deficit be lowered from 7% in 2009 to 5.9% in 2010, with the 3% target delayed until 2012. Yet both hinted that should the government fail to meet their demands, they will unleash “the markets”. Romania had the worst of the two worlds: stimulating domestic consumption in times of boom and cutting it in times of crisis.

The EU-side of the bailout money came first, with 1.5 billion euros transferred to Bucharest in July. However, the political crisis that led to the parliament dismissing the government in October 2009 resulted in the freezing of the bailout package. In the middle of an economic crisis that took the world by storm, elite-level political scuffles left the country without an effective government and a robust anti-crisis policy response.

For the rich only, economic stimulus packages

Following the suspenseful November elections and the formation of a new government, the parliament approved the bailout terms and the IMF then unlocked the needed funds. In February 2010, the IMF finally disbursed the first tranche of 2.3 billion euros, with half of the amount helping to plug the budget deficit, and with the other half going to the accounts of the central bank. As a result, the much-trumpeted bailout will be used this year only as a macroeconomic stabilizer rather than as a basis for a stimulus package that could help Romania stop its economic tailspin. Such packages were the standard response to the crisis in Europe, North America and large emerging economies.

Because the Romanian economy lives off exports to a west European core where demand increased only sluggishly during the past year, Romania could have weathered the crisis in a more “European” way by boosting domestic demand. This could have been achieved through such high-impact measures as increased public spending to fix its creaking transport infrastructure or the granting of cash benefits to the most socially vulnerable citizens.

Alas, Romania has much demand for such measures. Almost half of its extensive rail infrastructure (the fourth largest in Europe) functions only at half capacity, almost two thirds of national roads have long overdue repair needs and only 60% of the rural population can connect to potable water and sewage systems. Although cash benefits for the needy can effectively increase demand at the grassroots, almost 40% of the unemployed still do not receive any benefits. Unemployment and retirement in a country with social spending levels hovering above 12% of the budget are code words for extreme poverty.

Yet, the terms of the “bailout” clearly establish that the deck is stacked against the use of Keynesian counter-cyclical spending. Even though Romania’s level of debt is half of the level required by EU accession and remains record-low for EU standards, the IMF bars the country from borrowing on international markets for anti-crisis public investments at a time when private demand shrank dramatically.

Moreover, as the new Romanian finance minister recently declared, for much of the current infrastructure spending Romania does not need to borrow more, as it already received 3.5 billion euros in low-interest loans from the World Bank and the European Bank for Reconstruction and Development. Even though these loans were contracted for shovel-ready and high-employment public works projects, the low deficit levels mandated by the bailout terms do not allow the Romanian government to spend the loans.

Unable and unwilling, the paradoxical weakness of the Romanian state

In addition to external constraints, Romania has quite a few domestic bumps in the road for a state-led economic recovery. The first obstacle is ideological: pivotal elites in the Romanian state do not believe that Keynesian-style stimulus packages work and often engaged in flamboyant rhetoric about “socialist” policies embraced by the US and Western Europe during the past year and a half.

While infrastructure spending is, in principle, accepted as a legitimate anti-crisis measure, no government official saw cash payments for the unemployed as a worthy step for increasing demand. Second, even if state elites were willing to adopt these policies, the weak capacity of Romanian central and municipal public administration makes it difficult to launch ambitious public works programs. This is most evident in the use of EU funds, which could be used to compensate for public investment lost through austerity policies.

Romanian economist Cristian Socol showed that the absence of a long-term state development strategy and the lack of a competent state administration accounts for the fact that Romania absorbed barely 10% of the available EU structural funds during the first three years of EU membership. By contrast, other postcommunist EU member states absorbed 25% to 34% of available EU funds during the same period. The size of the lost opportunities is astonishing: 30,000 jobs per year.

The weakness of the Romanian state can no longer be explained by popular arguments of “communist legacy” or “poor education”. The ranks of the communist-era appointees thinned dramatically during the past ten years and the country has an oversupply of Western-educated specializations demanded by the civil service. Instead of orchestrating a major institutional overhaul, the central government and municipalities have had a spotty record of integrating young talent into their ranks. These institutions also continued to blend meritocratic appointment “quotas” with appointments motivated by cronyism, political pressure and other forms of “network governance”.

Relatively low wages and decreasing job security in the state administration forced talent to the private sector. Most importantly, however, despite the ubiquitous rhetoric about “bloated government” as the cause of all evils, the Romanian government agencies tasked with reviewing applications for EU structural funds remain woefully understaffed, which leads to costly inefficiency and delays.

State weakness alone cannot explain why infrastructure projects are so exasperatingly slow and expensive in Romania. One can advance many explanations, but high-level officials and foreign investors involved in undertaking public works repeatedly emphasised that years of media and judicial anti-corruption crusades have had the perverse effect of public servants and firms adopting an extremely risk-averse behaviour.

Rather than risk media exposes or prosecutors’ visits, state and private-sectors managers discovered it is more rational to work slower, charge more and be overzealous with getting all the official signatures before beginning on highways, schools and hospitals. This risk aversion seems to seep into the field of social spending.

The Romanian minister of labour recently declared that public servants’ fear of judicial harassment after approval of the EU projects is a reason why Romania used, since 2007, only 4.8% of the 4.3 billion euros allocated by EU for employment programs.

For a while, the Great Recession seemed to have generated, throughout the world, a serious debate about whether neoliberal macroeconomic orthodoxy will continue to govern market economies. Apparently, at least in Europe, the debate died down and we should expect more of the same economic policies. Even if the Romanian government was not in the IMF’s straitjacket and would have been willing and able to spend its way out of the crisis, international financial markets would probably have made a quick increase in deficit budget levels extremely costly.

Spain’s recent experience shows that international financial markets can wreck even the best-administered stimulus package in a prudent country with low levels of debt if the budget deficit increases to levels found excessive by international holders of debt.

Without a shift in economic orthodoxy throughout Europe, the policy choices of countries in crisis apparently continue to be decided by the preferences of the same actors who ignited the fire destroying the global economy.