Fleeing Romanians: The reenactment of an escape route 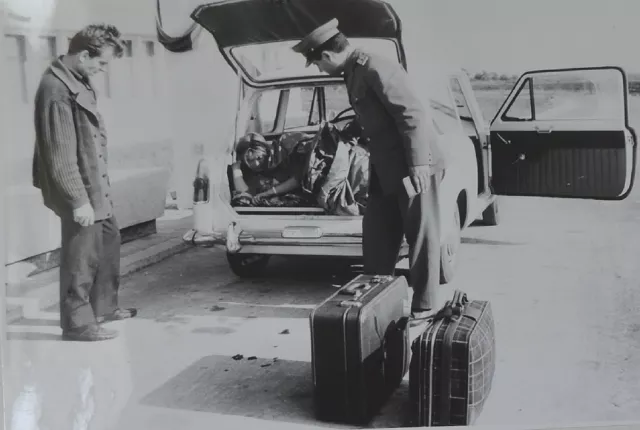 As conjurers, Romanians defectors fled the country and the regime hidden in car-trunks, vans, trains ceilings and even airplanes

(Originally published in Romanian by miscareaderezistenta.ro  on June 6th, 2016. This article is the second part of an investigative series developed within the "Reporters in the field" program, funded by the Robert Bosch Stiftung, in partnership with the Berliner Journalisten Schule. A selection of the articles issued within this series is now also proposed to the readers of OBC Transeuropa)

There were dozens, hundreds of them. They planned their escapes in detail, while risking a lot. But most say today they have no regrets for their decision back then, since living in a communist regime was no life for them. The topic we address here was described in detail in the records kept by the political police in the communist states, in this case the Romanian Securitate and the East German STASI, respectively.

The scripts for the escapes

The files hold full accounts that read like script-developments of movies, detailed frame by frame. There is information of not only Romanian defectors, but also East-Germans, who tried to use the Romania-Yugoslavia route to jump the borders towards the free world.
This investigative work aims to bring back the memory of all those people who attempted to defect the communist camp. Their stories are important, no matter they made it to the West, or died trying.

Most people attempted to defect swimming over the Danube or crossing the border-line on foot, well far away from official check-points. Yet, some people also went straight for those, albeit hidden in car-trunks, in the double-roofing of train carts, freight containers, utility airplanes or even ambulance vehicles.

An Italian tourist and a Romanian defector

One such case is described in file no I 286477, in the Romania's CNSAS archives: the Roman-Catholic priest of Orţişoara and Jimbolia, Demele Wenzel Francisc, fled Romania in 1980, along with other 23 people, all crammed in an ambulance vehicle.

Another such episode is documented in a photo-album at CNSAS, which re-enacts the attempt at fleeing Romania at a check-point by a women from Ramnicu Valcea, Elena, Joica, crammed in a car-trunk. The record of the events was the following: on September 16, 1966, the Italian citizen Rolando Rachelli approached the Stamora Moravița border crossing check-point, driving his Innocenti Austin automobile. The Italian had his documents checked, but so was his car. When opening the trunk, under two pieces of luggage and a canvas the border-guards found Joica, whom Rachelli was attempting to smuggle over the border to get her to Italy, via Yugoslavia.

Rachelli was born in 1930, in Romania, and had left the country, along his family, in 1948, settling in Milan. While the biographical detail concerning Joita, mentioned in the Securitate file was that Joita was a member of Communist Youth Union.

But the Joica case was not the only one. No matter how outlandish looks now the description of the events. Another file in the CNSAS archives, one that goes over such cases at the border check-points, is the one of Gerlinde Lang, 21, who attempted to cross the border hidden in the trunk of the car driven by the West-German citizen Franz Wetzenrath Franz. It was on the night of the 24th to the 25th of June 1982, when the border guards discovered her.

Many people succeeded though in their similar endeavors, and reside now in all parts of the world. The building of the Berlin Wall in 1961 closed one gate East-Germans had to leave for the West, so this was why they sought other borders in the communist camp that they could jump.

Following a 1972 agreement, the defecting of the East-Germans turned into a profitable business, as East Germany agreed with Romania and Yugoslavia to have the defectors returned to it alive, so that it could sell them to West Germany. The United Nations also paid important amounts of money to Yugoslavia, to not extradite the nationals of other communist countries who were trying to defect to the West via its territory: the hosting fees the UN paid were between 25 to 30 USD/per night/per person. Romania too was rumored to have promised Yugoslavia one train-wagon full of salt for every defector it sent back to Romania.

Many are reluctant to tell their stories

Still, 27 years after the fall of the Iron Curtain, many are yet afraid to go public with the account of their escape. They do not want for them or their off-spring to be associated with the status of a fugitive, of a refugee.

This is also the case for Mrs. O., now in her 60s, who left the German Democratic Republic in 1971 and who does not want to reveal her name. She was still a student at the University in Berlin, when she was promoted as chief of the propaganda in the students' organization. Her boyfriend, who was studying in Rostock, was promoted to a similar position, but he had also been blackmailed into becoming an informant for the STASI. Friends of the couple living in West Germany helped them to flee East Germany.

The secret was a secret plan

They played their cards to their chest: they told nothing to their respective families. The planning took several months though, and most of it was the design of their friends in West Germany. They took the train from Prague, via Budapest, to reach Romania, and once there attempted crossing its border with Yugoslavia, since information went that the control at that check-points was more lax. They thought first to forge their papers, but their friends had other option in mind. They transformed the engine area of two vehicles, so that one person could be hidden there. They also found two drivers willing to take the chance and drive the East-Germans over the border, for a hefty fee, of course. The two of them hid in one car each, and they all headed for the check-point. Of the cars standing in row at the border-crossing, both were checked by the border-guards.
The woman was found, and arrested along her driver. The man and his driver passed through.
“What a development! I was arrested in Romania, while my husband was free, in the West! It was a serious shock for me: Romania was under a totalitarian regime, poor, and with a depleted prison system. There were very basic conditions: a narrow cell, with six beds, in which were kept 12 women; there was a stool, serving as a toilette, which was washed once a week; we worked 12 hours a day in an unforgiving sun. Two weeks later I had my trial. It was conducted in Romanian, and not even the ruling was translated to me”, the woman recalls.

And she continues: ”We were 30 defectors, all convicted at the same time. But, since Romania was interested at the time in the money it could make on us, they gave me an 18-month prison term, which could be changed into a 10,000 Deutsch Mark fine. My West-Germany friends immediately sent the money and so I was free from prison now, but ironically, still in Romania,” she remembers in her memoirs, recorded on a web-site which collects the testimonies of former political prisoners in the Democratic Republic of Germany, the kollektives-gedaechtnis.de.

She made a second attempt at crossing the Romania-Yugoslavia border, but this time on the green-stripe of land, at night-time. There were four of them. They crossed over in dense fog, walking through a corn field, and then over the barbed-wire fences; they managed to avoid the border-guards and their dogs, and on the other side of the border their friends waited for them with their cars. They quickly made it to the West-Germany Embassy in Belgrade, and got temporary IDs issued for them to reach West Germany via Austria. Their final destination was the refugee camp in Giessen, where they had their identity checked and had valid documents issued on their name.

„Everything in life has a price to be paid”

Many times, people going to such an ordeal to reach the West were shocked to see that there was no heaven to be found. This is why it is not irrelevant to ask, time and again, if they feel it was worth it, leaving all behind – family and friends included, and taking all those risks.
”It was worth it. We wanted to have the freedom to choose our line of work, to travel, to read – all with no restrictions of choice. We have no regrets for taking this step. Everything in life has a price to be paid, but staying behind would have meant too steep a price for us. We would have been forced to take part in the propaganda machine. I also know of people who did not adapt to their new surroundings, once making it to the West; they got home sick. Not all people could have the choice and the resources to plan a flight as we had, but I am glad I had it,” says Mrs O. today.