Yugo - Nostalgics of All Meridians - Unite! 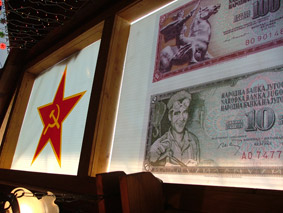 "At the Marshal's", a new place on the map of center-town Skopje, is a house of remembrance and nostalgia, and a unique memorial place which pays respect to Tito, all of this combined with the smell of traditional Balkan cuisine. A restaurant. Dedicated to the Marshal and his country

There are many schools and streets still carrying Tito's name around former Yugoslavia, and his portrait still hangs in pastry shops and barber saloons. But this is not quite the same. As of last year, a new place on the map of center-town Skopje brings reminiscence of the times that once were. "At the Marshal's" - a house of remembrance and nostalgia, and a unique memorial place which pays respect to the former leader, all of this combined with the smell of traditional Balkan cuisine. A restaurant. Dedicated to the Marshal and his country.

If you go to the Marshal's and you want a mixed salad you have to order "bratstvo i jedinstvo" (brotherhood and unity), after the slogan which was the front for the famous model of multiculturalism in former Yugoslavia. It aligns well to other culinary references to multiculturalism (as of recently again in fashion), such as "salad bowls" as opposed to "melting pots",.. but it is not sad. It is humorous and entertaining.

"We wanted to create a restaurant for everybody", says Ilija Despotovski, the manager of the place, "that is why we have a banner reading 'proletarians and capitalists - unite".

Ever since its opening, the place has been a "bomb". It hit front pages in Macedonia and was widely covered by media throughout former Yugoslavia and beyond. Both Croatian "Globus" and Serbian "Vreme" wrote articles on it, and that was just the beginning.

One of the most important national holidays in former Yugoslavia, 29th of November - the Day of the Republic, was last year suitably celebrated at the Marshal's with a performance of a regional pop star Tijana Dabcevic, originally from Skopje. She sang her last big hit, appropriately titled "It is all the same, only he is gone".

"We celebrated it just like in the old days" commented Tijana for the press later, "the only difference is that we do not anymore have those five nonworking days for the 29th".

It is a happy place, the Marshal's. "It appeals to everybody but especially to people who fondly remember those times, who have kept nice memories", says Mr. Despotovski.

The place bursts with Yugoslav memorabilia. Huge statues and photos of Tito in the garden; photos of his meetings with state officials, with Gandhi, Nehru, Castro. Enormous prints of the former Yugoslav banknotes on the ceiling; portraits, medals, books. Slogans that meant a lot once upon a time, written on the windows.

Many of the smaller items decorating the place are presents. "People come only to see the place, not because they want to eat. They have heard about it and they are curious. They come in and look around." says Mr. Despotovski, "and what is also very interesting, they bring presents. A man comes and says that he has 10 volumes of Edward Kardelj (Tito's closest associate) he wants to donate. People bring coins, old medals, paintings.

It is indeed more than a place to eat. It is but a small museum, with its own library, international corner, Marxist corner, Macedonian traditional corner. If perhaps a bit intense, with all the attention to detail, it is entirely about telling the story, remembering. Every little bit in it is thematic. The waiters are dressed as Tito's pioneers and they pose at request next to his huge portrait, saluting with the old pioneers' salutation.

The menu is a story in itself, making ordering both fun and a recollection. It has a print of the former Yugoslav passport on its front. "The passport that could take you everywhere without a visa" says Mr. Despotovski, referring to the painful Balkan reality of today. 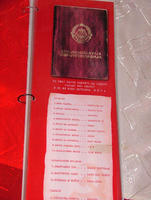 The traditional Macedonian rakija - Zolta, is called "prva udarna" (first special) after the "special striking brigades" during the war, a name which was later given to the best youth volunteers' brigades in the large scale public work programs. The names of the menu entries hold particular nuances that only a local ear would fully comprehend. Thus the so called "selska salata" (rural salad" is called "znanje-imanje" (knowing-having), after a tremendously popular TV program for the farmers, which went on for decades in the former country; there is a salad after a very famous song dedicated to Tito; the whiskey is described as "for manages only" reminiscing conditions whereby imported goods were a luxury and only privileged, such as managers of public companies, could afford them. And then, the menu holds references to our times - there is a "transition salad" implying poorer ingredients, and a "Schengen grill" - meaning it takes a while for that order to be prepared.

In less than a year from its opening, the Marshal's is becoming one of "the places in town", in that it attracts a great diversity of people, from actors, through students, to academics and businessmen. And not just locals. People from all over the region are coming.

And it already shapes trends. Just a few blocks away, a new coffee bar opened, by the name of "Broz". It is a copycat, probably lured by the tremendous success of the Marshal's. It follows the same idea, and rides on the same brand, yet it is not as impressive and telling in its story.

Tito indeed has fans in Skopje. An association from Skopje devoted to the memory of Tito was recently reported to have offered financial assistance for the repairing of the house of Tito's widow, Jovanka Broz, who still lives in Belgrade.

The Marshal's is indicative of the fact Tito will probably remain a cult-person for all times, somewhere more somewhere less, in the lands of former Yugoslavia. It is clear that he is the only one from among his colleagues, former communist leaders from Eastern Europe, to actually retain the image of a cult-person after their rule and life. A positive, liked and respected cult, that is. Why is this so is a long story. The Marshal's tells at least a part of it, in a warm, cozy and entertaining way.