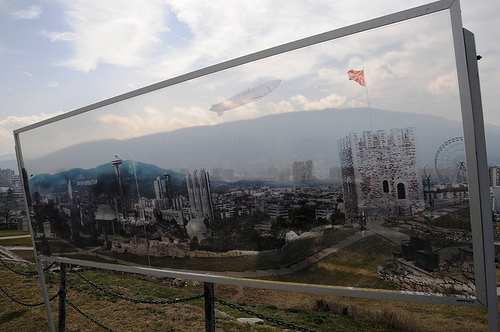 In Skopje the construction of a church has increased hostility between the ethnic groups living in the Macedonian capital. Behind the clashes and protests hide the different political agendas of VMRO and DUI, the two ruling parties. An example of how the political leadership's behavior can contribute to the escalation of inter-ethnic tensions

Last weekend in Skopje passed quietly and under heavy police presence. The expectations of repeated clashed between youth groups colliding on ethnic and religious grounds, did not come true. The police had practically sealed off the broad area around the Kale (Skopje’s Fortress) fearing a replay of the previous weekend’s (13th February) events, when eight people were injured in the clashes between two groups of football fans, one Macedonian and the other (ethnic) Albanian.

The reason for the fight by now seems to have become common place. It was a symbol, the building of a church. It is but the latest episode in a prolonged sequence of confrontations over religious symbols taking place in the country recently. According to many observers, the main generator of such tensions is the overzealous religious fervor somewhere in the leadership of the ruling right-wing party 'VMRO DPMNE'.

At end January the Democratic Union for Integration (DUI), junior partner in the VMRO-led government, staged a protest against a latest construction effort on the Kale presented as a church. The Kale is a historic monument from Roman and Ottoman times, and it is in the very centre of Skopje, in the Albanian-run Municipality of Chair.

DUI said they would not have it. They asked for the construction to stop. The reason could be that they have started to feel threatened in the face of the expansion of Christian symbols in the country lately. Similarly to how Christians in many places would feel in front of mosques being built.

In response, the Department for Protection of Cultural Heritage (DPCH), in charge of the project, said it would suspend the development until the tension subsided. The DPCH’s chief Pasko Kuzman, a passionate (and somewhat eccentric) archeologist is one of the VMRO government’s front men in the project of national(ist) renaissance.

Despite promises to stop construction, it seems to have continued. According to media reports, building went on at night.

Then on the evening of 11 February, a group of (probably ethnic Albanian) citizens, including several senior DUI officials, among whom the Mayor of Chair, and the Deputy Minister of Interior Xhevat Buchi, raided the foundations of the church-to-be on the Kale and demolished its iron skeleton. The event was caught on tape and reached all the TV stations. Police was also present but did not react. The Deputy Minister was on the side of the perpetrators. DUI (political successor of the armed guerillas who started the 2001 ethnic war in Macedonia) was showing its partner in the government that it meant business.

Spirits inflamed. Macedonians condemned the arrogant display of disrespect for the rule of law. VMRO-controlled institutions argued the structure was not a church but a monument of culture and that the act was vandalism. Albanians retorted that in actual fact the symbolic imposition was instead the act of vandalism. The Islamic Community, the top body of the Muslims in the country accused the government of promoting Christianity as a state religion. Non-religious Macedonians might also agree with such a statement, but were nevertheless offended by the Albanian show of brute disrespect....and so forth. This is how a conflict starts.

The likely culprits exercised restraint. Both Prime Minister Nikola Gruevski and DUI’s leader Ali Ahmeti avoided making any dramatic comments. Alas, the damage was already done. Two days later, youths - those pro-church and those against it - clashed on the Kale. Eight were injured, of whom one was kept in hospital seriously injured. A similar incident (over the building of a church) had already taken place a couple of years previously on the main square in Skopje. Back then both sides were Macedonian.

The sequel to the fight, announced broadly in the social media, fortunately did not take place this weekend.

The episode might be a good case study of the role of political leadership in ethnic conflict. Young people just carried on the fight started between coalition partners (in a cold and unhappy marriage of interest), VMRO and DUI. The real perpetrators, Gruevski and Ahmeti, hid behind calls for restraint and boiler-plate statements about the need to preserve good ethnic relations.

DUI raised tensions by showing a bullish attitude, but could also have done it because they felt pushed or offended by their partners in government.

Also, saying one thing and doing something else has by now come to be recognized as a trait of the current VMRO political leadership.

Churches have been built in Chair before, as well as other places where Albanians are the majority, and there were no problems. Mumbling objections are to be expected, as in every marriage.

The problem now is that the effort is perceived as political, promoted by the government. In addition, it is a consistent, continuous project. Had it been one church, fine. But the topic has practically dominated public debate over the passed two years.

On top of it all, its symbolism, the way the government is pushing it, is indeed domineering, as the Islamic Community fairly pointed out. Faith is a good thing but it should be practiced in private. Macedonia is both secular and multicultural. Rather than preach it, political leaders should exercise restraint.