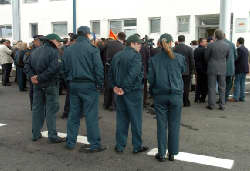 ''Do not change people to make changes'' said recently the EU to Macedonia. Along with support and encouragement for the new government of Prime Minister Nikola Gruevski, the political leadership of the country has started to receive its first warnings and disapprovals from Europe

"Do not change people to make changes" said recently the EU to Macedonia. Along with support and encouragement for the new government of Prime Minister Nikola Gruevski, the political leadership of the country has started to receive its first warnings and disapprovals from Europe. The reason is - the dismissals in the public administration.

Each new government in office in Macedonia conducts a thorough process of reshuffling of the public administration at the beginning of its mandate. Many officials appointed by the predecessor are reassigned, discharged, or they simply decide to leave by themselves, if they have other options.

And such was the conduct of the new government of Prime Minister Gruevski. At its first session end August, the new cabinet promptly discharged 544 public officials. They were the first ones from the so called "second echelon" of political appointees who will be replaced with new cadre from the in-coming political administration. The casualties include directors and board members of public enterprises, agencies, and funds, which are regularly appointed by the government; officials in each and every ministry; staff from the judiciary; people from different directorates ranging from tax collection, through air space, to cultural heritage or meteorology. Very much each post of responsibility which the government can directly or indirectly influence will be up for reshuffle.

A modest estimate is that the post-election administrative "cleansing" could comprise up to 2.000 people. According to other calculations, if the scan goes a bit deeper, as practiced by the previous governments, and stretch from "minister to doorman", as the saying goes, it could affect from 5.000 - 8.000 people. The number of people ousted is immense if compared to similar practices in other, much bigger countries, experts say.

The is nothing new in Macedonia. Only this time Europe had a problem with it. The first blow came second half of September from the Dutch Embassy to the country. The government had discharged some 35 customs officials, many of which had been engaged in a twinning capacity building project funded by the EU but with money coming from The Netherlands. The Dutch reacted angrily and threatened to cease the funding if the dismissals went through. In their view, the complete replacement of the staff engaged in the project, was rendering their effort meaningless and impossible to proceed.

Immediately after the Dutch warning, A1 TV reported of a letter from the EU Commission Delegation in the country to the Customs Directorate allegedly demanding "reassessment" of the layoffs of people involved in EU funded programs. The government originally denied there was a reaction from the EU, but the Delegation's office confirmed it has sent a "letter of protest". According to A1, the Delegation said it sent the letter to the Customs Directorate, but its meaning "went beyond".

Prime Minister Gruevski justified the changes in Customs with the need to fight corruption.

"I do not say that the people discharged are not experts. But also the new appointees are experts. Again, I do not contest their expertise, but then, how do those experts explain the fact that with their entire expertise, they had allowed 80% of the people importing goods into the country - to pay bribe?", commented Mr. Gruevski.

The country's customs services' involvement in corruption has proverbial proportions. Customs officers are favorite protagonists of endless jokes about corruption. Nevertheless, amidst the public fuss over the dismissals, findings of a recent World Bank analysis were reported, according to which Macedonian customs is among the less corrupt in the region, rating even better than the Croatian one.

Mr. Gruevski accused the oligarchic circles in the country for attempting to protect their positions in the administration by using the media and foreign diplomats.

A1 also reported the position of the regular "anonymous" sources from the Commission in Brussels, that the EU does not interfere with the human resources policy of the new government, but that each replacement which will impede the EU's investment in training of local experts, will be considered an obstacle to the process of cooperation. Clearly, in this case, this nice diplomatic phrasing suffers the probe of logic.

In a similar tone, according to other diplomatic sources, the partisan revanchism in this phase of Eurointegration could be devastating for Macedonia.

The first public criticism came in the conclusions of the third meting of the Stabilization and Association Committee held in Brussels on 19 September. In the press conference after the meeting, Mr. Pierre Mirel, Director Enlargement for candidate countries, stated Europe's concerns over "replacements in the public administration" in the country and their possible impact in the accession process. He explained in careful language that the preparations for accession are very demanding and that the reforms have many financial and political consequences, thus a broad consensus and political dialogue is required between the government, opposition, and civil society.

The crudeness of the "winner takes all" spoils system in Macedonia needs not any special elaboration, but cruel and irresponsible as it may be, it is embedded in the country's socio-economics.

Nevertheless, there are quite a few problematic moments also on the part of Brussels.

The reshuffles would not be as abrupt and far-reaching if the joblessness rate in the country would not be so high. A job in the public administration is considered one of the few remaining "secure" sources of income, in the absence of other economic opportunities. It is at the same time the strongest inductor of partisan and ballot-day loyalty. The existing practice of public administration reshuffle will change when the economy in the country gets better and subsequently government jobs become less attractive.

By applying pressure to this end, the EU not only goes way too far in interfering in domestic housekeeping, but also unknowingly affects the political process in the country. What will happen if political parties are no longer able to offer their main promise - jobs?

Another point is the quite transparent motivation, of the EU's reaction. It does not object to the management of the administration in general, only to those issues, in this case hand-full of staff, which concern its immediate interest. In this case, the interest of the project manager with the Dutch donor, to have the implementation of his/her project unhindered. Do candidate countries have the same right to react when some officials in DG Enlargement quit for other jobs and new ones are appointed? And does the country go through a very cumbersome and expensive democratic process of changing governments and putting new prime ministers in office, if they cannot replace a single customs official?

Preservation of the continuity of the programming and the impact of the foreign assistance is done differently, not with political pressure of the type the EU is applying.