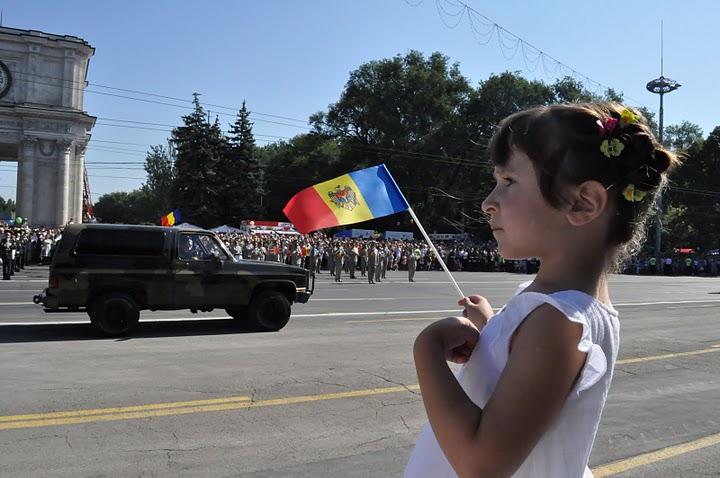 The Republic of Moldova's 20th Birthday. The celebrations, organized by the Government of Chişinău, involved a military parade and a get together of the five Presidents elected in these last twenty years. The current picture is not the most positive: the country remains bogged down in the Transnistria territorial dispute and its European perspectives are still fragile

Last Saturday (27.08) the Republic of Moldova marked 20 years of independence from the collapse of the Soviet Union. The day started with an impressive military parade which cost the Government half a million Euro. Officials from the first Parliament and the current one got together in front of the monument to Ștefan cel Mare, Prince of Moldova between 1457 and 1504. After two decades of independence, Moldova continues to face various challenges. The poorest country of Europe failed to elect its President and remains a split country as a result of the secessionist conflict in Transnistria.

Despite Moldovan society being almost split in half, with 70% of the population wanting to join European Union and 50% in favour of developing a strategic partnership with Russia [a high number of the people interviewed supports both alternatives, editor's note], the celebration was a moment for reflection upon successes and mistakes. Prime Minister Vlad Filat organized a big concert to celebrate Independence Day and for the first time brought together all the 5 Presidents elected in the history of the Republic.

Since Independence Day, about 600.000 Moldovan citizens have left their country for better lives. It is true that only during last year about 1,25 billion USD were transferred to families and relatives as remittances, which is the equivalent of the State's yearly budget. Mircea Snegur, the first president of the Republic of Moldova said that Moldovans should love their country and make sacrifices for the sake of its future prosperity.

After 8 years of Communist Party rule, the current Parliament succeeded to have a democratic majority but has failed to elect a President. The opposition Communist Party is hostile to any candidate from the Alliance for European Integration. This political challenge has been going on for more than two years and it is most likely that the scenario will be the same at the end of this year. During the presidency of Petru Lucinschi, Moldova became a parliamentarian State. Now Lucinschi himself says it is time that Moldova changed its election law in order to have a system in which 30% of seats would be allocated proportionally at the country level whereas the rest of the MPs would represent the 32 districts.

20 years since independence, the Republic of Moldova continues to face an identity crisis. Vladimir Voronin, the third President of Moldova and the current leader of the Communist Party has raised some of the identity issues. Part of the population identifies itself as Romanian and the other as Moldovan. Voronin said that a divided society does not do justice to democracy: “It is a threat to the independence of our country”. Voronin proposes a national project uniting all citizens and in which the Communist Party would also play a role.

In 1994, the Constitution was marked by a significant change: the national language changed from “Romanian” to “Moldovan”. Later in 2006, during Communist rule, in the schools the history of Romania became 'integrated history', with exclusive reference to the Province of Bessarabia (which corresponds, approximately, to the current Republic of Moldova), and this provoked mass protests on the streets. Mihai Ghimpu, the Acting President in 2010, tried to remind people that the decision for changing the Romanian history and language had actually been taken in order to consolidate the new Moldovan identity. “We are and will stay Romanians. People of all Romanian provinces, Moldova, Muntenia, Transislvania, speak the same language, Romanian. For 20 years we promoted a false identity and that is why we became the poorest country of Europe”, added Ghimpu.

20 years of crisis and transition has lessons for the political class to draw upon. At least, for the current President, Marian Lupu, the lesson that Moldovans need to learn is to be united, regardless of language or identity. "This is the country I want to see. We managed to build a State consciousness, this is a great achievement. Moldova is not a temporary project, and it is not an intermediate stage, it is a State. Regardless of the Russian, Romanina, Gagauz, Ukrainian, or Bulgarian identities, we are all Moldovans and this is the way to join the EU".

The Minister of Foreign Affairs, Iurie Leanca, said to journalists it is too early for Moldova to submit a request to become an associate member of the EU: "One cannot only make speeches about values and principles, these need to be put into practice." Leanca, with optimism, believes that Moldova will succeed in getting visa liberalization and a free trade agreement with the European Union. In the last two years, only, the democratic Government of Chişinău managed to launch a whole series of reforms aimed at bringing Moldova closer to the EU.

In between independence and a territorial conflict

Since the collapse of the Soviet Union, Moldova has been marked by a secessionist conflict. Just two days before Moldova signed its declaration of independence, Transnistria, a region previously under the Ukraine and now supported by the Russian Federation auto proclaimed its own independence. Since then, neither armed conflict nor diplomatic talks helped reunify the territory. The diplomatic representative of Transnistria, Vladimir Iastrebceak, defined the 20th Moldovan Independence Day a formal anniversary: "In all these 20 years we have not felt that Moldova runs an independent policy. Most of the tensions come from the relationships between Chişinău and Bucharest. Moldova has not been able to choose between State interests and the West, and is thus not able to handle independence."

The Republic of Moldova, for centuries a Romanian or Russian Province, had never been an independent State. Prime Minister Vlad Filat says that the greatest achievement Moldova has reached is freedom, which is no easy thing. Since Romania became a member of the EU, many experts say Moldova has now the chance to stand firm on its own feet, and become a European country in its own right.