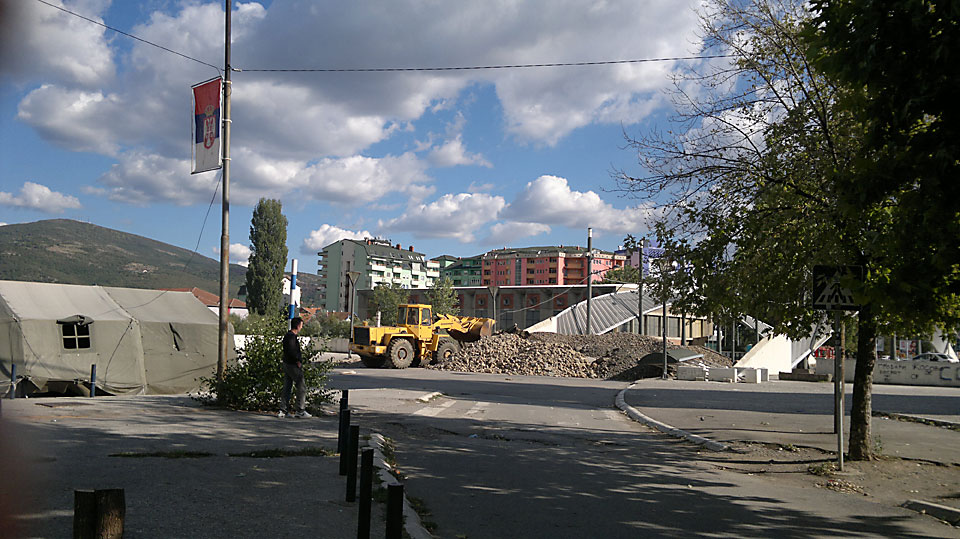 The security situation in Northern Kosovo is deteriorating, as the confrontation between KFOR troops and local Serbs continues. A violent clash on September 27 left many injured. Our update

The deafening car honking and Serbian flags were back on North Mitrovica streets on Sunday to celebrate another victory by Serbian volleyball players. Just like the golden boys last month, the Serbian women's volleyball team unexpectedly won the European championship. The victory against the German national women's team was all the sweeter for the Kosovo Serbs. "If they lose the fifth set, Merkel is sending them all to Jarinje," joked a North Mitrovica woman on her FB wall. It was payback time for the Serbs for the German show of military might at Jarinje and Brnjak.

In Northern Kosovo the victory of Serbian athletes is the only thing that has been celebrated for a long time. Any other sirens alert Serbs to pour into the streets, and flags are displayed to show their loyalty toward their motherland, Serbia.

To whom do Serbs in Northern Kosovo belong?

While one of the hot issues in Serbia is the census currently under way, there is no equivalent in the north of what Serbia calls its province. For ordinary people, what is even more shocking than the absence of census takers is the silence. Both the media and the politicians are silent, almost with the same intensity as in the first half of this year, when the former reported and the latter encouraged the Serbs in Northern Kosovo to boycott the Kosovo government census, and take part in the census that Serbia was organizing in the fall. The Serbs eagerly awaited the fall.

"At one time the Belgrade authorities were recommending that Serbs here do not take part in the Kosovo census, with the explanation that Kosovo Serbs are citizens of Serbia. Now they have excluded us from the census in order to avoid conflict with the powerful countries that recognize Kosovo's independence," said Slavka Drekalović, 56, from Zvečan. She added that although displaced persons from Kosovo and Metohija are registered in central Serbia, the remaining Serbs in Kosovo are being punished: "Now they have written off the Serbs in Northern Kosovo. It's as if we don't exist," said Slavka bitterly.

KFOR opens fire on unarmed civilians for the first time?

Finding out that they have been written off is just more bad news for the Serbs in Northern Kosovo. In Mitrovica Hospital there are a number of Serbs recovering from injuries they sustained on September 27 at Jarinje when, according to numerous eyewitnesses, U.S. KFOR troops opened fire on civilians, on an ambulance and on a young man trying to help a wounded person.

Early that morning, KFOR soldiers removed the roadblocks near Jarinje and took over a newly constructed alternative road just above the customs checkpoint. People living on the other side of the administrative line who subsequently tried to reach their workplaces on the Kosovo side by the alternative road were stopped.

Somewhat later senior officials of the municipality of Leposavić in the North requested that KFOR withdraw from the alternative roads but to no avail. Some of the officials were even temporarily detained.

The Serbs then decided to launch an operation to free the road and they sent a truck to try to remove the barbed wire. Eyewitnesses stated that several U.S.  soldiers suddenly pointed their weapons at the Serbs and opened fire on the truck and the Serbs close to it. The Serbs claim that they had no guns and that this was clearly visible to KFOR. Cameras recorded a part of the clash between Serbs and KFOR, showing no physical assault against the soldiers.

"First they shot me in the leg, and when people gathered around to help me, they (KFOR) fired again and hit me in the abdomen... As they were carrying me down the hill toward the ambulance, they fired again and hit the young man who was carrying me in the jaw... Then they opened fire on the ambulance," said Nebojša Radojičić from Leposavić, one of the injured, in a statement published by the Belgrade daily "Kurir". Nebojša claims there were also women and children on the barricades. "We protected them with our bodies, while the women were screaming, fleeing," he added in his first hand account.

In yet another terse statement from EULEX, there is little information, except to emphasize that EULEX is there to ensure "the rule of law."

The press release states that EULEX and KFOR “carried out a joint operation to take control of an unauthorized crossing point”:

“The initial phase of this operation passed off peacefully. Later, some individuals tried to break through the KFOR lines. Violence was shown towards KFOR soldiers who were trying to enforce controls over the illegal crossing point. A number of people including protestors and KFOR soldiers were injured,” according to the EULEX press release.

KFOR was somewhat more forthcoming. According to the local Radio KIM in Gračanica, military sources advised that during the attempt to break through the blockade bz truck, a soldier had been injured. "Another soldier then fired warning shots after the driver and shot him. After that the situation has worsened, smoke bombs were thrown at the soldiers of KFOR and heard the gunshots," advised KFOR.

KFOR blamed the Serbs for trying to seize a rifle from a KFOR soldier, while Serbs from the barricades claimed that one Serb attempted to take take the rifle from a soldier after he“suddenly opened fire at the crowd, together with other soldiers.”

International sources in Priština do not confirm Serb accusations that KFOR fired live ammunition. All top officials in Northern Kosovo, as well as the Serbian government, are saying live ammunition was fired on unarmed civilians and have been calling for days for an independent investigation into what happened, which would include UNMIK. The media are circulating images of various body parts of injured Serbs, and extracted bullets.

According to an unnamed source of OSCE and UNMIK in Leposavić, at a joint meeting on security with local leaders last week, it was confirmed that the fired 5.56 mm caliber cartridges were found and gathered behind barbed wire, on the side where the Serbs were, and that they were previously kept in the local police station.

Previously, the media had speculated that Serb Kosovo police and/or EULEX police had removed the evidence, and that U.S. KFOR had asked for the cartridges back the same day. There was even speculation that the Americans had tried to swap the detained truck for the cartridges.

Even the farm animals have gone mad

Meanwhile, KFOR has expanded the zone it controls at Jarinje and enclosed it with barbed wire at a distance of approximately 500 m in the direction of Leposavić and occupying many private properties.

Here, in addition to the "Nothing Hill" military base, there is now another where helicopters are landing several times a day, carrying supplies, soldiers, and an occasional customs officer. They are silent in shifts. They have nothing to do. No one approaches them. The situation is the same at Brnjak.

Consequently, about one hundred Serbian households in five hamlets have found themselves cut off from each other and the rest of Kosovo. Also imprisoned in the military base is the local village cemetary. Only a part of the hamlet Šarpelj still has train traffic and access to the Serb barricade. In this part of the village with about seven houses there is a primary medical health care facility but the nurse and the physician can only go as far as the Serb barricade. The great majority of houses, however, are completely cut off. The villagers are also prevented from accessing the cemetery, a blow they find difficult given the strong reverence for the deceased among the Serbs.

In a telephone interview, Dušan Premović, 65, from the village of Šarpelj describes "our days under siege":

"To be honest with you, I was thinking I could pass my retirement days quietly here on my farm. I am disabled and I am old. But I have helicopters flying over my head, constantly landing and taking off, they're less than 150 m from my house, and even closer to my neighbor! I have a few farm animals. My chickens and pigs have gone completely mad, the helicopters are constantly in the air. This is a catastrophe."

The talks in Brussels have been discontinued. The Albanians and the international Western officials are accusing the Serbs. Belgrade keeps repeating that it only accepts "a peaceful settlement of the crisis" but that it cannot discuss "technical details" while Serbs are being shot at and the situation on the ground in Northern Kosovo is being changed by force. shooting at Serbs and forcibly changing situation on the ground in the north. They are asking to speak with international officials about Jarinje and Brnjak. Another meeting of the Security Council on Northern Kosovo has been held. The neglected UNMIK is again trying to become active on the ground thanks to the efforts of senior Afghan diplomat Farid Zarif.

While KFOR is removing barricades, Serbs are setting up new ones. Now they are also behind the administrative border with Serbia. When KFOR closes an alternative road, the Serbs dig a new one. On the main bridge over the Ibar River, they reinforced the barricade by pouring cement in response to the stationing of KFOR troops just next to the southern part of the bridge.

In the south of Kosovo on Sunday morning an elderly Serb from Orahovac was killed with a hunting rifle, and his son was seriously wounded. According to Serb statistics, he is the 69th Serb killed in this municipality in the past 12 years.