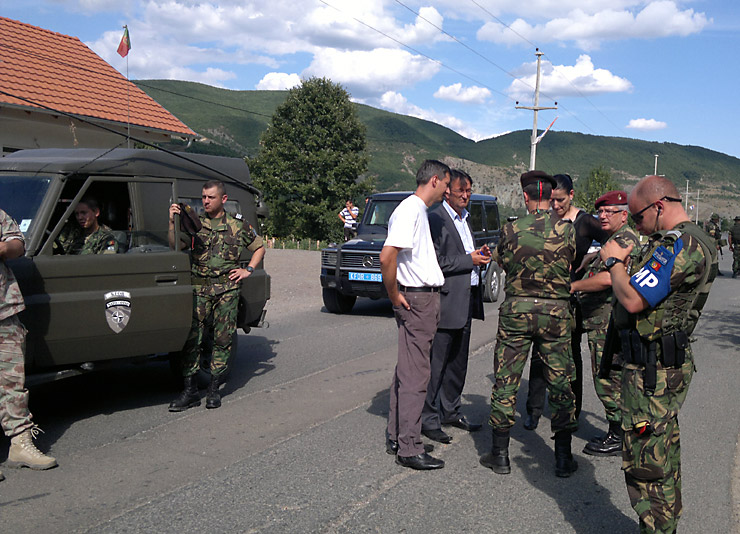 The tension is still high in the North of Kosovo, after the Pristina government's attempt to take control of the border crossings with central Serbia. From our correspondent

After a long break, ethnic clashes have returned to northern Kosovo. On July 25 the crisis reopened, when special Kosovo police units (ROSU) surprised half-empty Serbian towns in northern Kosovo and rushed into the two administrative entry points into central Serbia - Brnjak and Jarinje.

Kosovo’s government recently closed their southern border to products from Serbia, until Serbia recognizes the custom stamp of the Kosovo state. Rumours that the same action might follow on Kosovo’s northern border had not stopped many Serbs in the border region to leave their homes for a holiday.

The remaining residents immediately reacted to the Kosovo police action by blocking the roads with trucks and erecting barricades of woods and sand. Kosovo Albanians managed to arrive in Brnjak and disarm the Kosovo Police Service (KPS) officers (ethnic Serbs) there. They were then caught in ‘a sandwich’ when they tried to do the same in Jarinje.

The same night the Serbian government’s head negotiator with Pristina, Borislav Stefanović, accompanied by Kosovo Minister Goran Bogdanović arrived to meet with KFOR commander Erhard Bühler and to stay with the local community.

In the meeting, Serbs requested that the special ROSU troops leave the north and return the situation to what it had been before their arrival, when the ethnic Serbian KPS officers and EULEX police were in charge. Kosovo’s central government was determined that ROSU stay and establish the same custom system as on the rest of Kosovo’s borders.

The death of policeman Enver Zymberi

In spite of positive signals to resolve the crisis, the marathon meeting appeared not to be the last. The following day, ROSU and local Serbs in the Zubin Potok area exchanged gunfire that resulted in the death of a member of the special police ROSU unit. Albanian sources reported that a sniper bullet to his head killed him while he was withdrawing from Brnjak. An eyewitness, who wished to remain anonymous, claimed that the Kosovo Albanian policeman had been killed in the exchange of automatic fire:

“As was agreed, a ROSU unit was withdrawing. However, as soon as they left the area we control, a new ROSU unit started driving towards our barricades. We immediately rushed with cars towards them before they would reach the barricades because we wanted to stop them from entering the town. As we met on the road, they could not pass our cars; they stopped and stepped out with the guns. There were shots in the air, I do not know who shot first, and then we started shooting in the direction of each other. They broke the deal. They should have not come back.”

After the continued talks between the Serbs and KFOR the same day, Stefanović said that all the details were agreed and the last troops of ROSU would finally pull out by 8am the following day.

Back in Pristina the same evening, Kosovo’s Prime Minister Hashim Thaci made an extraordinary press statement to honour the killed officer and justify the action. Without any possibility for journalists to ask questions, Thaci declared: “Last night’s decision was not an easy one, but it was a just one and such an act was necessary. Finally, as a Prime Minister I have a moral, constitutional and legal duty to make such hard decisions.”

In Kosovo, the killed officer Enver Zymberi was proclaimed a hero. Several Facebook pages in his honour were immediately launched after his death and rallied thousands of ethnic Albanian sympathisers. They shared strong national sentiments, condemning Serbs. An NGO activist, Valjdete Idrizi, from southern Mitrovica, proclaimed: “He was killed while protecting his state’s border, murdered on duty, murdered in an ambush by a sniper.”

Kosovo Interior Minister Bajram Rexhepi confirmed yesterday that ROSU had pulled out of North Kosovo, but stated that the ROSU mission was successfully accomplished after it established a custom border and created conditions for the work of an ethnically mixed border police.

Although the crisis seemed resolved, the following day contradicting information quickly spread about ROSU units staying in the American KFOR’s base in Leposavić and that Croatian helicopters were transporting new ROSU units to Brnjak. Croatian sources later confirmed that someone shot at their helicopter transporting custom and border police.

Although Bühler denied the presence of any ROSU unit in the north while addressing massed Kosovo Serbs, the panic and tensions increased when local authorities declared a crisis situation. Local news reported that Albanian customs had taken over Brnjak and that an American KFOR motorcade had been stopped at the Zvečan barricade, when travelling to Leposavić. The rumours spread that ROSU troops were transported by the American Humvee vehicles and helicopters to Jarinje. In the meantime, Stefanović insisted on the earlier agreed upon deal and requested the withdrawal of Kosovo Albanian custom officers and border police from the Brnjak checkpoint.

Accompanied by Kosovo’s moderate Serbian bishop Teodosije, he tried to calm down the tensions among the local Serbs and finally persuaded them to let the Americans use the road, after having received insurances they were not transporting any ROSU troops but only insuring regular food and water supply for the military base in Leposavić. 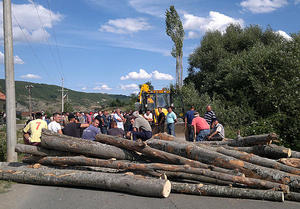 People on the barricades have been sleepless for nights, angry, tense and sensitive to any rumour or change of the situation. They unwillingly speak to media and look highly mistrustful, refusing to reveal their names or to be photographed.

A protester at the barricade in nearby village Zupče, in Zubin Potok municipality softly said: “You have to understand us. We are all the time outside in this hot weather. Most of all, we are angry with KFOR. They blame us, but the Kosovo Albanians provoked the crisis. We do not want an Albanian custom or border station here. It is our land and system. We defend; we do not attack.”

A tall, wide-shouldered young man angrily shouted: “We have no future in their country. Look at the Serbs in the south. They are disappearing.”

The Mayor of Zubin Potok, Slaviša Ristić was with his men. He harshly said: “They lied to us. Bühler told us yesterday that if we spot any ROSU troops, we should immediately let him know it, to arrest them, and today, they are transporting them to the checkpoint by helicopters.”

Torching of the check-point

The culmination was yet to come in the evening. All of a sudden, while a few Serbian TV stations had programs live from the quiet Jarinje gate, about 50 youngsters in hoods and with sunglasses suddenly emerged in front of the cameras, furiously torched all the facilities, bulldozed the area and disappeared. Until now, it remained unclear how they passed the barricades. EULEX armoured vehicles later sealed the main bridge in Mitrovica North.

The violence was immediately followed by a strong and angry reaction by the Serbian president and police officials, along with the Serbian crisis-solving representative Stefanović. Some political officials issued contradictory statements on whether the violence was well organized or spontaneous. The Serbian police started heavy controls to prevent the possible arrival of troublemakers from central Serbia. Agitators from Pristina immediately accused Belgrade. Both sides agreed in labelling the perpetrators as extremists, hooligans and vandals.

Once again, Stefanović and Bühler met late into the night. American KFOR today controls what remains of the Jarinje checkpoint and supports Brnjak, which still has Kosovo custom official and ethnic Albanian Kosovo border police.

Stefanović and Bühlers are still talking today, the fourth day of the crisis.

How a crisis escalates

Fuel for the fire comes from the constant circulation of rumours and contradictory, unverified information.

Zvezdan Djukanović, an Associated Press correspondent and photographer, said: “It was unbelievably difficult to work these days, due to the mass of misinformation and rumours we were getting.”

On the other side, EULEX remains strikingly silent. In a sterile press statement, they stated: “It is important that the current situation is resolved in a calm and peaceful manner. And EULEX is coordinating closely with KFOR to do this and to maintain security.” They denied any involvement in the ROSU operation.

After almost an artificial silence, northern Kosovo is back to its infamous unruliness. The tension is in the air. Helicopters hover. Protesters are back on the streets. A fearless and furious new generation of teenagers has been raised in a barbed-wire city, while watching ethnic clashes on their streets since their earliest childhood. The older ones know of the danger that northern Kosovo teeters at the edge of a wide-scale clash. All of them are adamantly fighting back against facing a similar scenario to that of Serbs in southern Kosovo.