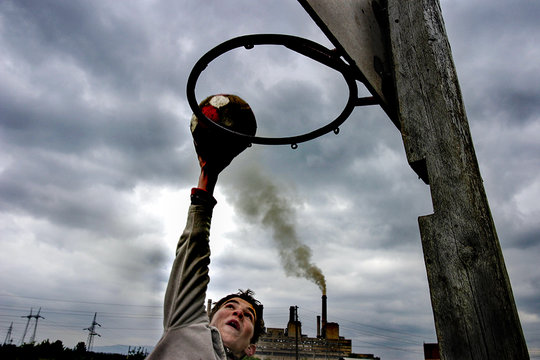 A Pristina magazine has started a campaign to end Kosovo's international isolation in sports. The shining judo star Majlinda Kelmendi has joined in

The Kosovo judoka, Majlinda Kelmendi , has proven that sometimes athletes can improve the image of their country more than traditional diplomacy. In 2013, Majlinda won the gold medal in Brazil, giving Kosovo the first ever sport world title. The heroine of Kosovo’s sports maintained the world title winning the 2014 World Judo Championships, which was held in Russia. Neither Brazil, nor Russia, recognize Kosovo’s statehood, but thanks to Majlinda, Kosovo’s flag appeared in both countries. Moreover, thanks to her victory, Kosovo was mentioned in many international media.

Besides Majlinda, Kosovo has many other talented athletes. However, they are deprived to represent their country in international competitions. A large number of international sporting federations, in fact, do not recognize Kosovo's 2008 declaration of independence from Serbia. There are no Olympic Games for Kosovo, nor world cups where the Kosovo athletes can compete equally, as all other athletes from around the world.

The Olympic Committee of Kosovo is the top responsible institution in Pristina for sport policies and its development. Its president, Besim Hasani, claims that the international isolation of Kosovo’s sports is purely for political reasons.

“Kosovo so far was recognized as an independent country from 110 out of 193 UN member states, therefore we expect that the International Olympic Committee will soon accept the Olympic Committee of Kosovo, in order to enable our athletes to participate in World or European Championships, and to be qualified for the Olympic Games of Rio 2016”, he said.

Mexhit Devaja was the president of the Handball Federation of Kosovo at that time. He recalls how hard they worked to convince the international authorities that Kosovo deserved the right to compete internationally as other states.

“I knocked at many doors; I met a lot of important people, including the Head of the International Federation of Handball to lobby for our cause, while Serbia was aggressively lobbying against the internationalization of Kosovo’s sport. Lots of people, including my colleagues in Kosovo, did not believe that the Handball Federation of Kosovo could join the European family without solving the political status, but I was optimistic. And we did it. Our acceptance in the European Handball Federation in 2004 was a major achievement for Kosovo”, Devaja recalls.

Two of the most popular sports in Kosovo, football and basketball, are not yet internationally recognized. But a step forward for football was made in January, when Kosovo’s national team was given permission by the FIFA to play against FIFA member associations - excluding members from the former Yugoslavia - in international friendly matches. However, no symbols or anthems of Kosovo can be displayed beside the ones on the player’s uniforms logo, according to FIFA rules. Serbia protested against this decision, saying that she was not consulted by FIFA on this matter.

The international isolation in sports is causing a vast financial loss to Kosovo’s economy, according to experts. Moreover, the country cannot benefit from different available funds, such as the FIFA funds for developing the infrastructure. Athletes are the ones to suffer the most from this isolation, having difficulties in their professional career development.

“Everywhere in the world sport has the mission to build friendly bridges. It was the sport that broke blockades between countries. Instead of providing possibilities to build such bridges through sports, in Kosovo we are witnesses to unimaginable barriers that hinder this noble mission”, says Tomor Grabovci, a sports analyst.

Since 1999, Serbia has more actively lobbied against the internationalization of Kosovo’s sports than the Kosovo authorities did to gain support for membership in the world associations.

In an effort to mobilize as many people as possible for the cause of enabling Kosovo athletes to compete in international competitions under the state flag, the magazine Kosovo 2.0 started the campaign Kosovo wants to play . The editor in chief, Besa Luci, is convinced that Kosovo has many talented athletes who can challenge their international peers, but they can’t do so for political reasons.

“It is a political issue, as many other political issues that ultimately end up affecting the lives of Kosovo’s citizens. With regards to sports, there is the issue of the non-recognizing countries, as well as the fact that the state of Serbia has also continuously lobbied against Kosovo’s participation in international competitions”, she said.

The crowd-funding campaign “Kosovo wants to play” aims at raising enough funds to publish a magazine issue only on Kosovar sports. The Kosovo 2.0 team doesn’t expect miracles, but they believe their campaign will have an impact.

“We cannot change the rules. We cannot sit on UEFA’s throne and decide to allow athletes of a Kosovar national team to compete against Germany, or England. We cannot put Kosovar athletes to run on the next Olympics, just like that. But there is much we can do towards the goal of having Kosovar athletes equally competing. With our publication, we will reach the presidents of all sports federations and the Olympic Committee. Also, Kosovo 2.0 will target international media in order to get the world’s attention about this injustice beyond our publication”. This is the stance of the magazine’s team. Among others, the campaign is supported also by Kosovo’s shining judo star, Majlinda Kelmendi.