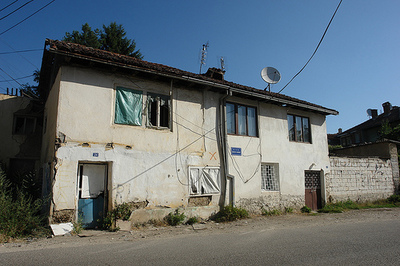 In Kosovo many buildings, mostly belonging to Serbian citizens, are occupied or sold illegally in the owners' absence. Swindlers often use false documents and conniving officials, unveiling the weakness of the rule of law. The case of Peja/Pec

Wearing a long, thick coat and a cowboy hat, Mustafa Radoniqi stands by the glass door of his law office overlooking the main courthouse in Peja/Pec in western Kosovo. In that court, Radoniqi recently won a case for a Serb citizen from Peja who claimed ownership to a residential flat. At the end of war in 1999, the owner, Slavka Rajicic, fled to Belgrade and the flat remained vacant until sold in 2001 using false documents.

Radoniqi explains, “Counterfeiters produced an illegal authorization in Bijelo Polje (in eastern Montenegro) of eligibility to sell the property to the buyer, a Kosovo villager now living in Peja.” The court decided to overrule the 2001 contract on grounds of manipulation. “The initial doubts were raised after discovering that the authorization took place a long distance from where the real owner is currently residing.” Radoniqi’s experience in this field won him many clients living outside Kosovo, who he represents as victims of the legal dysfunctions in the new state.

Most Serb residential properties in Peja's region were left empty when the war ended in 1999. Soon Albanians took their place after finding themselves homeless. Western Kosovo was one of the worst war-affected regions in Kosovo; more than eight thousand houses were destroyed.

A few years after the humanitarian emergency ended and internally displaced Albanians returned to their houses, some individuals illegally occupied vacant houses in a time when legal authorities were not functioning. Others decided to take advantage of the confused situation and used false documents to sell properties they did not legally own.

The Peja region alone has 40 cases of property sold using falsified documents, according to an OSCE’s Department of Human Rights and Communities report, published in August 2009. The report claims that buyers often are also victims, because they are unaware what stands behind the contract.

New owners, generally Kosovo Albanians, have been subject to manipulations of a different nature. After buying from a fake owner, who presented falsified authorizations with a forged court stamp, many discovered that the property had been previously sold to someone else, or even to two different persons.

New owners usually do not register their property in the books of municipal authorities, a habit that benefits the manipulators. Legal officer Mehmet Berisha, who has worked for four years with several property agencies dealing with property claims and issues, notes, “Adding to the problems, during the 1990s, Serbian authorities prohibited transfer of ownership between Albanians and Serbs through a special law on property transactions.”

Berisha explains, “Legal transactions related to ownership occurring between Serbian and Albanian counterparts were not certified by local courts, because the law itself aimed to discourage and prevent any displacement of Kosovo Serbs from the region, in accordance with Serbia’s national policy.” He adds that the situation had a direct impact in the overall property situation after the war.

Residents of Peja also contributed to the property confusion when they shirk civil responsibilities. Berisha says, “After the war, buyers are not obliged to go to the city cadastre to register their property. They think that by doing so they can save some money, but the benefits of such behaviour cannot match the damage caused by not letting people identify the owner of a certain property.”

The problems for all owners have been increased because Serbs fleeing the town took away all relevant documents and land deeds. About 15 % of Peja’s 110,000 inhabitants before the war were Serbs and Montenegrins, Today most are refugees in neighbouring Serbia and Montenegro. To expropriate their properties, fraudsters living in Peja often collaborate with Serbian counterparts to obtain false documents.

The OSCE’s report confirms that in many cases, documents used in transactions are forged in cities of Bar, Berane, Podgorica, Rozaje and Ulcinj in Montenegro, as well as in Belgrade, Kragujevac, and Smederevo in Serbia.

Another attorney, speaking anonymously, admits that institutions responsible for property issues have never tried to stop this negative phenomenon. The lawyer, who has also mediated problem contracts, says,“Court officials have ‘closed their eyes’ on falsified documents which had fake seals when legalizing a transfer of ownership.”

The court’s negligence is confirmed by the property expert Mehmet Berisha, “Bribes, corruption, and physical threats have always succeeded to accomplish the goal of pressuring the court official.”

Hopes for change are now laid upon the judges of the EU’s Rule of Law mission – EULEX, who are supposed to help the overloaded domestic officials. A judge appointed at the beginning of this year to deal only with property issues will place a higher priority on cases of Serbian victims. Unofficially, about 30 cases have been solved.

Another body established to assist the local courts is the Kosovo Property Agency (KPA). The agency deals with the contested property resulting from the 1998-1999 conflict and manages them after returning ownership to legal owners.

The KPA’s press officer Kreshnik Sylejmani says, “The agency has 3,618 properties in its rental scheme, which makes it possible for the legal property owners to receive a fixed income until deciding to utilize the property in another way.”

The right to peacefully enjoy possession is guaranteed by the European Convention on Human Rights and Fundamental Freedoms. The OSCE’s report on ‘Fraudulent Property Transactions’ has discovered that victims failing to enjoy this right and subject to illegal transactions are usually the displaced persons – mainly Serbs.

Illegal property transactions are a factor preventing thousands of Serbs from returning to their homes. The Danish Refugee Council (DRC) has identified these problems while setting up voluntary return. Gramen Taraku, head of DRC office in Peja, says, “Sustainable return means that we look into possibilities that a returnee has to restart his life and integrate into the community. The return is organized in cooperation with municipal institutions, police, KFOR, and the community.” The organization sets up several daylong visits for the displaced to obtain personal documents or even start a dialogue with the receiving community.

The total number of Serbs returned to Peja region is about 700, with only 30 families reintegrated to life in the town itself.

Vera Lazovic, a member of the Office for Returns at Peja’s Municipality, is a returnee and states,
“No one has the right to use or abuse someone else’s property, regardless if the property is used or not.”

According to attorney offices and real estate agents, the number of ‘fraudulent property transactions’ has declined recently, not only because the institutions are more efficient fighting the phenomenon, but also because the demand has dropped compared to the property-buying boom just after the war.

People dealing with illegal transactions today walk free. When caught they are charged with minor fines, despite the Criminal Code of Kosovo consideration that falsifying a legal document is a crime. OSCE’s report asserts that the same persons and real estate agencies have repeatedly been performing such illegal acts since 2000.