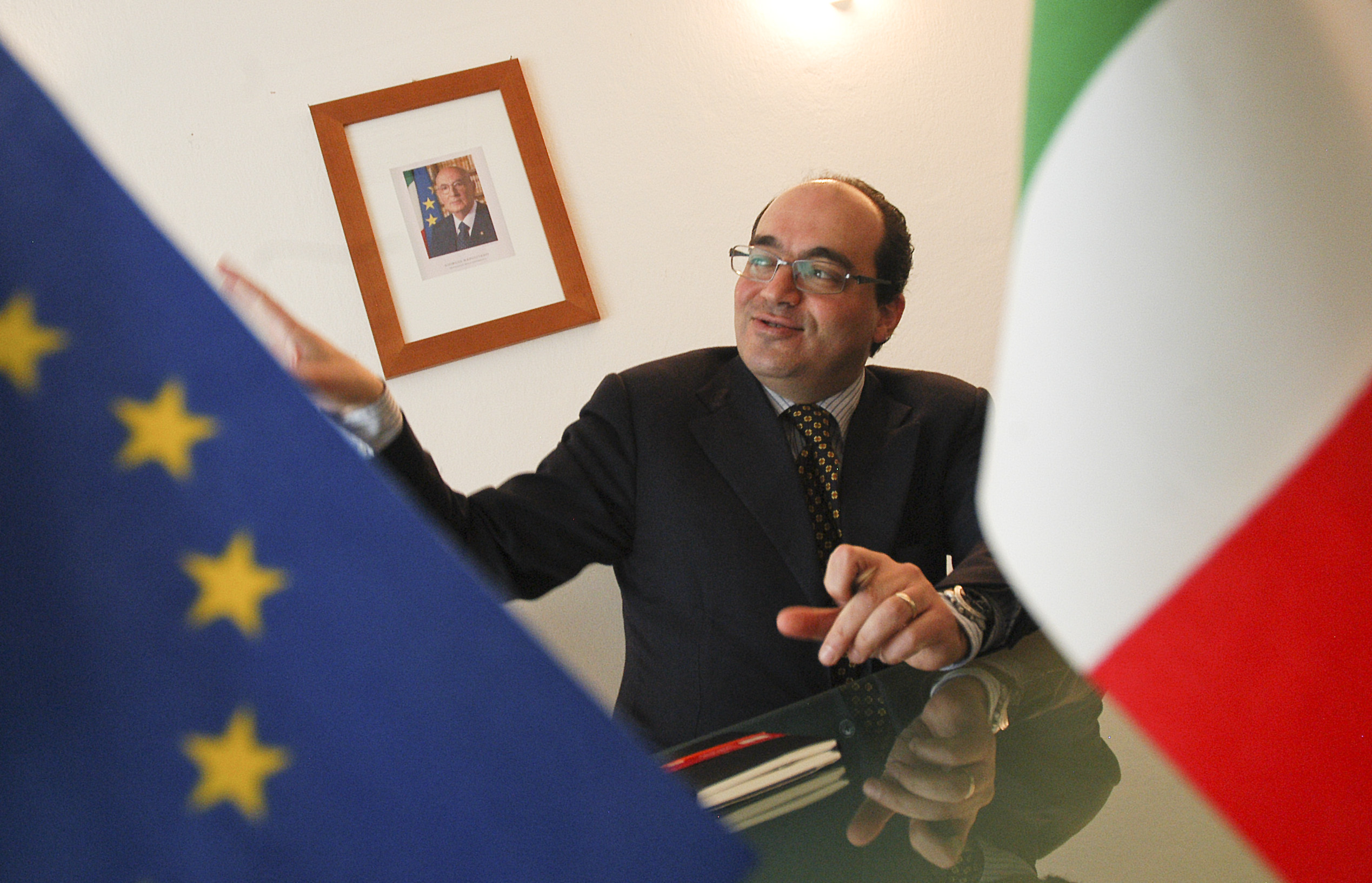 The difficult balances of the EULEX mission, the proposals for territorial exchange between Serbia and Kosovo, and the visa liberalisation issue. Our correspondent talked to Italian ambassador in Kosovo Michael L. Giffoni

Michael L. Giffoni has been Italian ambassador to Kosovo since 3 September 2008. A career diplomat since 1991, he has much experience in the Balkan region. He served as deputy chief of the Italian special diplomatic delegation, subsequently an embassy, in Sarajevo from 1994 to 1996. For the next three years, he was a senior political advisor at the Office of the High Representative (OHR) in Bosnia. From 2006 to 2008, he led the task force for the Western Balkans with the European Union's political unit, and became an advisor on the Balkans to the European Union's foreign policy chief, Javier Solana.

Italy played a particular role in the negotiations concerning the final status of Kosovo, which led to the declaration of independence. From a diplomatic point of view, what was the most relevant achievement in this process?

Ever since 1999, the Italian government has clearly seen the stabilisation of Kosovo as crucial to the stability of the entire Balkan region. In turn, the stability of the Balkans is a high priority for Italy, because what happens there has a direct impact on the other side of the Adriatic. Italy has been one of the countries that strongly support the prospect of European integration for the Western Balkan countries. Kosovo is among these countries. Kosovo's possibilities for joining the European Union (EU) had been announced at the Thessaloniki Summit in 2004, confirmed in the following years, and continuing after the declaration of independence. Italy was among the first countries to recognise Kosovo's independence. At present, we are, however, undergoing a crucial phase for Kosovo's prospect for joining the EU: the phase of institutional consolidation and economic and social progress. Italy will definitely make its constructive contribution.

What is Italy's involvement with the European EULEX mission? The person in charge of the justice sector is Italian, Alberto Perduca...

EULEX is a mission approved by all EU member states, not only by those that recognized Kosovo's independence. In terms of staff, Italy is the EU member state with the largest contribution to the present mission. Currently EULEX has 1,700 staff, 200 are Italians. Second in terms of staff is Germany.

What is the reason for such a high number of Italians?

Italy places strong faith in EULEX as an essential instrument of the European presence in Kosovo. Italy nominated Judge Perduca as the chief of the justice sector, but also many other Italian judges are supporting the justice sector at the local level. Italian customs officials contribute to the specific and very important custom sector. In addition, carabinieri and police officers maintain public order. Italy strongly believes in Kosovo's future in the EU; therefore, the Italian government contributes so many staff, both civilian and military officials, at every level and in every sector.

In your view, what is the situation with the current Italian development cooperation effort in Kosovo?

Italy has been present in Kosovo since 1999. In view of the larger goal of regional stability, after the armed conflict, our country has helped Kosovo's stability through contributions to many sectors, We have provided military support with our involvement in NATO's KFOR mission, and by helping in different ways, either through our cooperation effort or through the many different international structures, such as the European ones.

More specifically, the direct support to reviving Kosovo's economy and promoting the development of the country has been channelled to different sectors: agriculture, infrastructure and health. Let's also not forget the very important sectors of culture and the protection of religious, spiritual, and cultural heritage.

It is important to underscore that at the Kosovo donor conference in Brussels in July of 2008, Italy decided to make a considerable bilateral contribution. Assistance in the last year concentrated in three sectors: first, health - through an ambitious project to support the national health strategy (especially focusing on the cardiac surgery department at Pristina hospital, and to quality control in all national hospitals); second, protection of cultural heritage - through the projects of restoring the orthodox monasteries of Decani and Pec/Peja, and several historic mosques; and, third, agriculture - through some projects seeking to create a system of production adhering to EU standards.

How much does Italy contribute?

The overall bilateral contribution pledged at the donor conference in 2008 was 12 million euros, for projects undertaken this year. As I already mentioned, other forms of Italian financial support are channelled through the European financial mechanisms and the European Commission.

Let's go back to EULEX. What do you think of the relationship between the mission and Kosovar institutions, specifically with respect to the memorandum of understanding concerning police cooperation, which the European mission seems interested in signing with Serbia? The Kosovo government is opposed to it, and it claims that it represents a challenge to its sovereignty...

I think this is a problem of perception. Moreover, I agree with the position of the EU and Brussels. Since the very beginning, the EULEX mandate has included the memorandum with Serbia in the police sector, which is a subject of heated debate these days, and the mandate also includes any other ensuing memorandum of understanding in the field of customs, justice, etc. To make it clear, these are memorandums and hence strictly technical agreements that EULEX does not sign instead of the Kosovo government, but in order to carry out its mandate in Kosovo. In addition, EULEX has the mandate to do this, because the agreement negotiated with Serbia was previously done in the same way with Montenegro, Albania, and all other neighbouring states. Sovereignty is not put in question. Arguments to the contrary, launched above all by the local press, are excessive and do not consider the strictly technical nature of this agreement. Anyhow, I think that the latest statements by local leadership go in this direction.

In your view, the Kosovo government should not be concerned about anything?

I think that Kosovo, same as Serbia and EULEX, will have many benefits from the forms of police cooperation provided for in the agreement between EULEX and Serbia. The memorandum of understanding derives from EULEX's need to fully implement its mandate in order to, for example, combat organized crime and smuggling also in northern Kosovo. This goal can be accomplished thanks to the memorandum of understanding. The benefits that will result from EULEX activity are undoubtedly benefits for the Kosovo government.

How do you explain the fact that all preparations for this agreement have been done without the knowledge of the Kosovo government?

I do not think so, it was completely the opposite. Perhaps the amount of information to the public and the extent of public involvement can be discussed, but EULEX has certainly not acted without the knowledge of the local government.

Do you think that EULEX's reputation in Kosovo has been tarnished, primarily because of the controversy surrounding the memorandum?

I absolutely do not think so. The protests that took place involved marginal and radical groups. I think that the public opinion in Kosovo is perfectly capable of understanding the advantages of EULEX's presence and engagement.

What do you think of the opening of the Schengen "white list", which would soon include Macedonia, Serbia, and Montenegro, but which excludes Kosovo? In your opinion, what would be the consequences of this decision?

The proposal for visa liberalisation made by the European Commission concerns several countries, that is, Serbia, Macedonia, and Montenegro, whereas it could not include Albania and Bosnia because the technical criteria concerning passports and controls have not been met. These technical criteria have been known for years. Concerning Kosovo, things are more complex. Kosovo was still not independent when the dialogue commenced on visa liberalisation, called technically "visa facilitation dialogue". This is the reason for the decision of the European Commission, which could not include Kosovo in the subsequent phase of liberalisation. Now, the country is taking the first steps in this direction, and I am certain that it will soon be able to participate in the visa liberalisation process.

But the process of visa liberalisation included Serbia, which is still reluctant to accept its responsibility with respect to war crimes...

I think that Serbia's stability is important for the Balkans and that visa liberalisation will have impact on stability. However, I want to talk about the Republic of Kosovo and about the importance of its walk towards Europe. Eighteen months since Kosovo's independence declaration, we are in a critical phase: institutional, as well as economic and social consolidation. This reform requires a model and both Italy as well as Brussels think that this model can only be provided by the European Union and its standards.

How do you see the situation in northern Kosovo?

I think it gives reasons for concern. The international community should get strongly involved in order to support institutions in the country so that they can have an increasingly important role also in the north of the country. The EU has consensus on this, and this issue will be a key turning point in Kosovo. The right of return should be guaranteed to refugees from both communities. The reconstruction of houses is critical to this end, but so is the legal certainty concerning property rights. At the same time, the returns need to take place in a stable and secure atmosphere. On this issue, I want to underline that the mayor of Mitrovica, Bajram Rexhepi, has so far played a positive and constructive role in this respect; much work also has to be done in the northern part of Mitrovica to ensure the return of Albanian families under the best possible conditions.

The idea favouring an exchange of territories recently appeared in the US Congress; the valleys of Presevo and Medvedja in exchange for the north of Kosovo...

I think that a grave error is committed every time there is talk of exchange of territories. The stability and the security of the Western Balkans must be sought and guaranteed within existing borders. An exchange of territories is in nobody's interest. It is, however, in everybody's interest that the countries of the Western Balkans, including Serbia and Kosovo, join the European Union within their current borders, hence reducing in this way the importance of borders. This same thing happened for the other countries from Central and Eastern Europe that have already joined the EU.

You think that the idea about exchange of territories is a threat to the stability of the region?

It is certainly a dangerous idea, because it can propel other similar aspirations concerning other territories, sort of a chain reaction. To put it more clearly: it is enough to think of the area populated by the Albanian community in Macedonia, or other regions in the Balkans populated by minorities. If a process like this should start, it would be difficult to control. I think that the better solution is to ensure that the Albanian community in Serbia, the Serbian community in Kosovo, the Serb entity in Bosnia and Herzegovina, are recognized, and all the minority communities in the other Balkan countries are recognized as having legitimate rights within their countries. This is what we have tried to do over the past 10 years, and I think that this is the only positive option for the stabilisation of the Balkans.