Kosovo elections: conflicting realities South and North of the Ibar 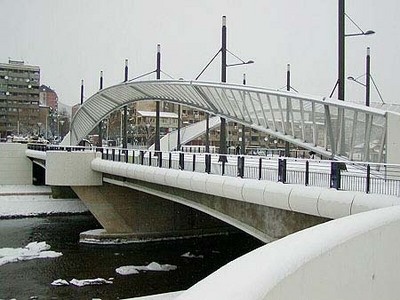 The bridge on the Ibar in Mitrovica

The mid-November local elections in Kosovo stressed once more the two different realities of the Serbs living north and south of the Ibar river. For those living south, some kind of participation was considered as a vital necessity to retain local power. North of Mitrovica, the boycott was almost complete

Kosovo's most recent elections, held in mid-November, remained in the headlines for days south of the Ibar River, which divides the city of Mitrovica and represents the unofficial border between the Serbian-dominated north and the rest of Kosovo. The elections stirred vast interest because local authorities organised and ran them for the first time since Kosovo unilaterally proclaimed independence from Serbia on 17 February 2008. International representatives have declared the elections successful.

However, on Sunday, 15 November, especially north of the river, Serbs were mourning the death of Patriarch Pavle, head of the Serbian Orthodox Church. Many learned about the voting in 'the neighbourhood' only through media reports.

In following days, Kosovo Albanians were busy with the post-election issues - coalitions, irregularities and the second round of balloting. In the grieving days for the Serbs, buses and cars carried Kosovo Serbs to Belgrade. Hundreds of thousands of people from Serbia and neighbouring countries flocked to the Serbian Orthodox cathedral in Belgrade to pay tribute to his holiness, the Patriarch Pavle.

Because Serbs abstained from voting, only a few polls opened in a few Albanian villages and ethnically mixed areas in northern Kosovo municipalities.

The northern Kosovo Serbs were not interested in voting in Kosovo's elections. They stay away from a new Kosovo society while living in an entirely different political and administrative system from Kosovo Albanians. The separated worlds of the two communities are even more reflected in those parallel systems, which have existed for years. Serbian institutions are functional in the north and have the full loyalty of local Kosovo Serbs. In contrast, in the northerners' eyes, Kosovo's institutions are not even a matter to be considered.

Another reason why the Kosovo ballot has remained unnoticed in the north was the absence of the usual counter-campaign conducted by local political bosses. Their influence has significantly weakened in the past year and half after the switch of political power in Belgrade from the nationalists to the democrats.

The Kosovo authorities have indirectly recognised that there were no conditions to run the elections in all of the predominantly Serbian areas. They announced the postponement until next spring of the ballot in northern Mitrovica and another Serbian municipality, the small enclave of Partes.

Further south in Kosovo, in a completely different reality, Serbs cast their vote despite previous boycotts. Therefore, the Albanian and international representatives felt more inspired this time to point at the significance of the Serbian participation and the establishment of three new predominantly Serbian municipalities. Out of 74 registered parties and independent candidates, 22 were Serbian.

The greatest media attention was paid to the new municipality of Gracanica, a village near Pristina, as being the most involved and active in this election. About 3,500 residents cast votes (23.62 % of eligible votes) for eight political parties and individuals. Some of the contestants are in the leading positions of the Serbian sponsored institutions.

It is not known how many Serbs voted. Out of 700,000 votes cast in Kosovo, an estimated 8,000 votes were from the Serbs and other non-Albanians, which makes up about 5% of the Serbian electorate. Serbs won in the three newly formed municipalities but lost in two more predominantly Serbian areas, Strpce and Novo Brdo.

In Strpce, where Serbs make up 70% of population, the turnout was 30.91 %, and majority of those votes were the Albanian. The second round will probably take place in less than a week. A similar situation occurred in another predominantly Serbian area, Novo Brdo, where 25.64% of eligible voters participated and Albanians also won the majority.

In the post-election atmosphere, opponents to the Kosovo elections and the Serbian contestants swamped media with allegations of irregularities and vote theft.

A group of Serbian leaders in Gracanica recently announced that it would call on Kosovo Serbs to protest with the civil disobedience if the central electoral commission does not annul the poll results in Gracanica because of "the notorious and public vote theft". They accuse the winner, the Independent Liberal Party, of stealing the vote.

The Serbian government's coordinator for Kosovo, Goran Arsic, spoke about "numerous irregularities" and corruption: "The voters were under pressure and the votes could be bought for 200 to 450 euros per family or 50 Euros per person. People were getting firewood, flour, sugar, oil." Similar accusations came from the Serbian Minister for Kosovo and Metohija.

The establishment of new municipalities was foreseen by the Ahtisaari's plan, which was initially rejected by the Serbs. In spite of the Serb rejection, the local ballot followed the two-year campaign on the decentralisation, endorsed by the international civilian office and targeting the Serbian areas. However, the decentralisation plan seemed to make no change in the north.

For many Serbs, the participation in this poll was not interpreted as the result of a successful electoral campaign or the promotion of the decentralisation, but the consequence of lacking a clear support and strategy from Belgrade for the future of Serbs south of the Ibar River. If there was any genuine support, it failed to be articulated in proactive fieldwork. Fearing to be left behind by Belgrade and being already isolated, Serbs in southern Kosovo see no other option to survive but to win local power where possible.

This came a year and a half after the Serbian local ballot took place in Kosovo, when Serbia sponsored and established self-governments in predominantly Serbian areas.

Additional confusion was stirred after the contradictory reactions to the latest Kosovo ballot came from the Serbian government in Belgrade. Immediately after the release of the first unofficial poll statistics, the Serbia's state secretary for Kosovo and Metohija, Oliver Ivanovic, said that the Serbian participation "has significantly shaken the Serbian government's credibility in the province", so Kosovo policy needed to be changed. There will be a crack between the Serbs in the northern Kosovo and Serbs in southern Kosovo and Belgrade authorities." Ivanovic emphasised that there could not be two local self-governments in a small area, one answering to Pristina, and the to Belgrade. He is expecting a confrontation in the coming months.

On the other hand, Serbia's Minister for Kosovo and Metohija, Goran Bogdanovic, remarked that it was a minor vote when considering that 120,000 Kosovo Serbs were eligible to vote. For him, the new Serbian representatives are "illegitimate".

"A vast majority of the Serbs followed the government's recommendation and recognised the state's and national interests, and their life interest more than any other. There will not be revenge on those who decided to vote. The only punishment for them will be the result of people who abstained from voting, denying them any right to represent others."

The number of the Serbian voters in the last polls is surely a few times higher than the turnout at the time when those two Serbian officials were also contesting in Kosovo's ballot. The Serbian turnout at that time was insignificant and portrayed by their opponents as a statistical error. The current Serbian Minister and Secretary stayed for several years in the Kosovo Assembly.

The turnout, contradictory views and conflicting opinions symbolise a deep division among the Serbian community and instigate new problems. Serbs are additionally weakened by their confrontational positions, both in the north and south of the river. Although placed in two realities, they nevertheless recognise only one need: to stay in their home.