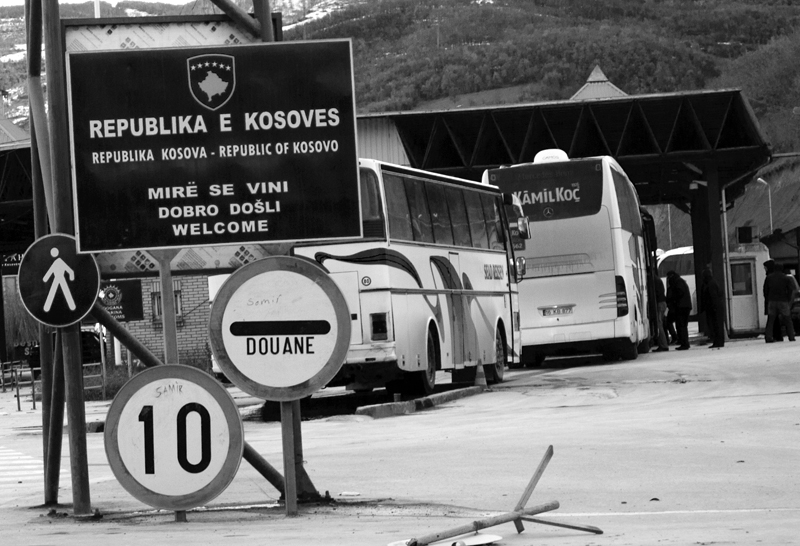 At the border between Kosovo and Macedonia - F.Martino

After the European Commission recently included Albania and Bosnia-Herzegovina in the so-called “white list” of Schengen, Kosovo remains the last territory in the Balkans whose citizens must get a visa to travel to countries in the Schengen Area

In December, when the temperatures drop below zero and snow falls, most Kosovars stay inside. This is only the first reason that discourages Gezim R., a 40-year-old from Pristina, from joining the queue in front of one of the EU embassies. “I just cannot bother to spend hours in front of an embassy queuing only to travel to Europe,” says Gezim, owner of a café in downtown Pristina.

Kosovo remains the last territory in the Western Balkans whose citizens must get a special visa in order to travel to countries in the Schengen Area. The European Commission (EC) included Albania and Bosnia-Herzegovina in the so-called “white list” of Schengen and now its citizens are benefiting from the decision since 15 December.

Compared to Albania, whose citizens were “isolated” for more than 60 years, Kosovars suffered travel restrictions only later. Various countries in Western Europe decided to close the borders for former Yugoslavia when the wars started in early 1990s. Gezim remembers travelling with his sister to Germany and France during 1980s, and the time when all they had to think about was packing their bag.

“Back then, I was still a teenager and I loved to travel by train,” Gezim recalls the time when he spent summer holidays visiting his cousins in Europe. He not only resents the physical procedures, but how EU countries treat the visa-seekers. “By providing bank details, family birth certificates, property documents and other needed documents, we reveal too much of our private life; and that is wrong.”

Thousands of applications are made each month in several EU embassies in Pristina, where Kosovars search for a visa that enables them to travel for family or medical reasons, tourism or business. Without a visa, a Kosovo passport holder can travel only to neighbouring Albania, Montenegro and Macedonia.

This reality is not expected to change soon, according to Venera Hajrullahu, the head of the Kosovar Civil Society Foundation (KCSF).

“The European Commission committed to launch a visa liberalisation dialogue 'shortly',” Hajrullahu says, adding that this step would finally provide Kosovo clear benchmarks for progress in this challenging reform process.

Institutions in Kosovo expected that the dialogue with Brussels on visa abolition would start in September, an assumption strongly promoted by the government. After failing to start the process, the government refused to take any responsibility but instead blamed European diplomats. EC office in Pristina simply responded with, “Kosovo was not ready.”

Visa liberalisation was also one of the key promises of political parties during the campaign for December general elections. Former Prime Minister Hashim Thaci made the strongest commitments to the electorate by assuring that Kosovars would travel without visas within 15 months if his Democratic Party of Kosovo wins elections. Other political candidates were more careful and pledged to cooperate with Brussels in order to meet the criteria to end the isolation as soon as possible.

However, the Kosovar expert on EU integrations issues, Hajrullahu, does not speculate with timeframes, but says there are no actual impediments for the EU to start the visa dialogue with Kosovo. This stance was confirmed by European institutions stating that Kosovo should benefit from the visa liberalisation without regard to a member state’s position on the status of Kosovo. This eliminated possible barriers from five EU countries that have not recognised Kosovo’s independence.

The government continuously claims that all the requirements have been met. The 2010 EC Progress Report notes that Kosovo made crucial progress in adopting legislation on readmission and made efforts on reintegration.

In 2009, according to government figures, about 4,800 Kosovars have returned to Kosovo from Europe as part of the readmission scheme.

In order to meet the EU criteria, more reforms need to be made in the rule of law, fight against organized crime and corruption, border and migration management, security of documents, and protection of personal data.

Hajrullahu explains, “It is illogical for the EU not to have a visa dialogue with Kosovo, which is not only a relatively small state, but is part of EU’s enlargement policy and hosts EULEX, the largest-ever EU mission in support to justice and rule of law, which are critical areas for visa liberalisation.  Leaving only Kosovo isolated – is not beneficial to either the EU or Kosovo, but also the Western Balkan region.”

In search of alternatives

Kosovo’s isolation during the 1990s became complicated after 1999 war. Up until 2009, when administered by the international community, a Kosovar could only hold a UNMIK travel document. However, many countries in the world did not recognise the UNMIK travel document.  Frequently, the authorities in the neighbouring Macedonian would also reject it.

After Kosovo declared independence, authorities in Pristina started issuing passports displaying the symbols of the newest state. Besides pride, though, citizens have not seen any other benefit in regards to travelling to Europe.

Now, citizens of Kosovo use an alternative gateway to Europe and obtain an Albanian passport – legally and illegally – to enjoy the freedom of movement to EU countries. The Albanian Embassy in Pristina has confirmed that many Kosovars asked about getting Albanian citizenship.

Members of the Kosovo government confirm great interest for Albania passports but they refuse to consider it as a problem. A long list of requirements must be met before getting a passport, but at least a Kosovo citizen is privileged to wait only three years compared to five years for all other applicants.

Getting another country’s passport is not a novelty for Kosovars. Thousands of citizens hold Serbian passports. Compared to Tirana, officials in Belgrade have not set any barriers to issue such a document, since it considers Kosovo as part of their country.

However, currently Kosovars do not want a Serbian passport because the EU has excluded Serbian citizens with a Kosovo residence address from benefiting from visa liberalisation when Serbia entered in the Schengen “white list” in December 2009. Therefore, Kosovars only want passports with an address in Serbia.

The benefits of the Serbian passport inspired Elvis B. to find a mediator that could “fix” him with a passport that would enable free travel. “It is a routine job. You just have to know the right people and have 2,000 euros with you,” Elvis says while speaking openly in front of many people in a barbershop in Pristina. He explains that all this money is paid to bribe the authorities, since a regular passport costs 50 euros. Elvis has to change his resident address to one in Serbia before applying for a “red” (Serbian) passport.

Having just returned from Belgrade, he confirms that authorities have tightened the controls and that the fraud scheme is becoming increasingly risky. Officials in Belgrade claim that the fraud scheme and the “fake” passports have been blocked. A simple one-day inquiry in Pristina indicates that that is not true.

This “public secret” is not confined only in Kosovo-Serbia case. Since 2009, Kosovars have also tried to illegally obtain a passport in Montenegro and Macedonia.

The most isolated holidays

Failing to include Kosovo in the visa-liberalisation process confirms that its citizens will be the most isolated in the region. This year, it is the turn for citizens of Albania and Bosnia- Herzegovina (or at least for the ones who can afford it) to choose which European city to celebrate end-of-the-year holidays. In 2009, the same possibility was granted to Serbia, Montenegro, and Macedonia.

Sipping his afternoon tea in his cafe opposite the government building, Gezim looks back to another year with unfulfilled promises regarding freedom of movement. If there was no travel restriction, he would now already be somewhere in the Swiss Alps celebrating holidays with his family.