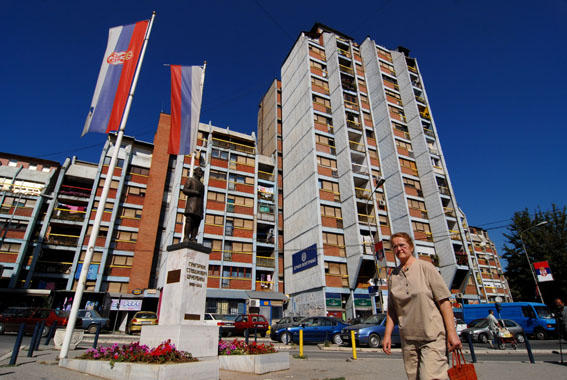 Kosovo is preparing for the local elections of November 3 after the shocking murder of EULEX officer Audrius Šenavičius. A test on the recent Belgrade-Pristina agreements

EULEX 's custom officer, Lithuanian Audrius Šenavičius, was killed in an ambush fire while heading the Mitrovica - Raška road to his workplace in the early morning hours of the 19th September, at one of the most notorious places in northern Kosovo: Balaban. This was the second ambush murder of an international police officer in northern Kosovo.

Ten years ago, another UNMIK police officer, Indian Menos Satish, was killed while patrolling the same road, Mitrovica - Raška, in a clearly marked UN police vehicle. The ambush was set up in the Albanian village of Ceranjski Potok, located near the very place at which the EULEX 's custom officer was recently fatally injured. While placing the explosive at the same place back in 2000, two members of the former so-called Albanian Liberation Army got killed. Apart from near Serbian Banjska village, there are three more Albanian villages on the slopes of Mount Bajgora. Even before the war, a police checkpoint was installed there, as one of the training camps of the former Kosovo Liberation Army operated in this mountain.

However, the news of the murder of the Lithuanian policeman echoed like a thunder amongst North Kosovo Serbs. Even the most fervent right-wing activists have sharply condemned the killing, noting that such an act "remains entirely unnatural in the struggle for survival of Serbs in the north" adding that the moment in which the killing took place is “the most dangerous for any such action against international officials."

Shortly after the news of the murder was released, hasty and almost threatening statements carried out by the currently two key political figures in Serbia, Ivica Dačić and Aleksandar Vučić, followed. They indirectly indicated Serbs as culprits. It was another shock not only for North Kosovo Serbs but also for some international officials. In fact, all the leading international officials in Kosovo gave highly cautious and moderate statements about the possible culprits, while their most fervent comment was that "they will turn over every stone to find the perpetrator and punish him justly.” Since the killings of fourteen Serbian harvesters in the village of Staro Gacko in June 1999, however, international officials have declared the same after each of numerous crimes. The perpetrators have still not been brought to justice.

"I would have wished them the worst a few years ago, when the former Belgrade’s regime agreed for EULEX to enter here against our will. But now it is absurd to believe that anyone of us would even think of harming these occupiers. They will anyway go soon, and everyone is waiting only for something to blame the Serbs in the north for. This has never been our method of struggle for the past thirteen years", one of the leading activists of a right-wing movement in the North said in an informal conversation.

After the guard of honor served by his closest colleagues at the Institute for Forensic Medicine in Pristina, the remains of Audrius Šenavičius arrived at the airport where they were taken over by his mother. Kosovo president Atifete Jahjaga personally offered condolences, while some media shyly slipped unconfirmed news that Belgrade's "liaison officer" in Pristina, Dejan Pavićević, attended the ceremony.

The death of the young EULEX officer, however, is just one of the topics in Kosovo's currently hot political agenda. The heated election fall is in the swing. The political importance of Kosovo local ballots, called for 3 November, can be seen in the number of registered parties and civic initiatives, including the candidates for mayors and municipal councillors.

In a territory with a population of just over 1,730,000, almost 90% mono-ethnic, with an underdeveloped democracy and a high level of corruption, 103 political entities applied for the upcoming elections: 50 Albanians, 31 Serbian, 3 Turkish, 9 Bosniak, 3 Montenegrin, 1 Gorani , 2 Ashkali, 2 Roma, one Egyptian and one Croatian. There will be 224 mayor candidates, while 7,740 will run for a post as municipal councillor.

The crucial strategic political question, however, remains the participation, or boycott, of Serbs in the North. While it has been clearly pointed out that the Kosovo elections scheduled for 3 November will be recognized in northern Kosovo, with or without the participation of the wider Serbian community, it remains to be seen whether, and to what extent, Northern Serbs will take part to the vote.

Forecasts vary. In his poetic statements, the former activist of notorious JUL [Yugoslav Left] and current minister without portfolio for Kosovo and Metohija, Aleskandar Vulin, believes that it will be "the largest share of the Serbian community since 2000" because it would "preserve Kosovo and Metohija in Serbia forever." Some political analysts predict "unexpectedly high participation" of northern Serbs. Politicians close to Vojislav Koštunica are convinced that "the Serbian people in the north will continue resisting pressures from Pristina, despite the fact that the official Belgrade made a tremendous pressure on them to take part in elections of a state that it does not recognise."

Political parties registered for the elections are already restless. Their public activities are, however, discrete. Many who are on the ballot lists are not ready to appear in public. The resentment of the population against participating in the elections is evident.

"I am willing to listen to reasons for taking part in the elections. I understand that we are in a difficult situation, and that we will be left on our own if we boycott the elections. But I would really feel ill at ease going out to vote, cause everything in me is fighting against it", says Svetlana A. (36), on the streets of North Mitrovica.

Another reason for the discretion of political activists in the campaign for the elections are the reported cases of intimidation. The wife of one of the candidates for mayor of Mitrovica, Oliver Ivanović, was attacked in her family home. The vehicle of his political opponent, Dimitrije Janićijević, was also targeted.

On the other hand, the campaign against the elections is evident. In northern Mitrovica, almost all central billboards have been plastered for a while with striking messages against the participation of Serbs in the November elections. Recently, a simple message of "boycott" impressively ‘decorated’ the entire street lighting polls on the Zvečan - Mitrovica road.

After the official Belgrade dismantled all four municipal assemblies in northern Kosovo on 11 September, cause of the initial decision of the latters to boycott the elections, citizens expect that both the government and the ruling parties will play again a key role in the turnout.

Many expect that official Belgrade, shortly before the elections, will press the population to cast their ballot for the state's “Serbian” list. Citizens are also worried about people voting “in absentia” outside of Kosovo, and of possible abuses.

Belgrade has accused the Kosovo Central Electoral Commission (CIK) of wanting to reduce the number of Serbian voters, not accepting all persons entitled to vote who are living as displaced persons in Serbia proper. In a recent statement, the CIK said that out of the 41.168 registered voters outside of Kosovo, only 8,383 are regular.

Belgrade also continues to accuse Pristina of reducing the possibilities for a wider participation of the Serbian community in local elections. The latest accusations have arrived on the occasion of the ban imposed on Serbian officials to visit Kosovo during the election campaign. The Serbian Prime Minister, Ivica Dačić, threatened to withdraw from the negotiations because he was not allowed to come to Kosovo. A meeting of the now famous trio Ashton-Dačić-Thaçi followed, after which there were reports that Dačić will be arriving in Kosovo. After sixteen rounds of dialogue between Belgrade and Pristina in early September, and an agreement on electricity and telecommunications, this was another political success of the trojka.

Such media shows, however, have no significant effect on the Serbs in the north. Despite the successes in the VIP level, the Kosovo Serb community clearly feels that their position has weakened after the Brussels talks. If they will take part to the vote, they will do so in obedience to Belgrade or because they will see the ballots as the least evil solution.