Behxhet Pacolli: with an eye to the east 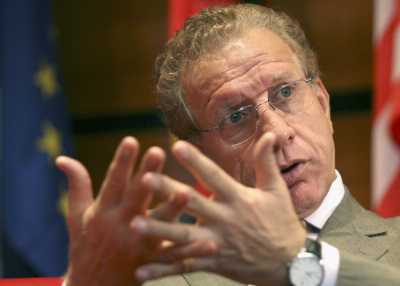 Behxhet Pacolli is one of the richest businessmen in Kosovo. After creating an empire in the construction industry, in Russia as well as in some other ex-soviet republics, today he's the leader of the third political party in Kosovo, the "Coalition for a New Kosovo". Our correspondent met him after Saturday's elections

Your "Coalition for a New Kosovo" (Aleanca Kosova e Re - AKR) took part for the first time in Kosovo's parliamentary elections, and won about 12% of the votes. Are you satisfied with this result?

This result doesn't come unexpected. You have to consider that our movement was created just nine months ago. I believe, however, that we could have obtained more: our supporters are not political activists, as the ones that usually vote for LDK (Democratic League of Kosovo) or PDK (Democratic Party of Kosovo), and they were probably discouraged by bad weather. All opinion polls before the elections gave us from 18% to 20%, a share I think closer to our real possibilities. Anyway, we are satisfied and believe we will become the first political party at the next elections.

What's the portrait of your voter? Who voted for the AKR?

Our voters are mainly young people, students, women. We don't count on people older than 45: that generation is too much linked to traditional parties, like PDK and LDK.

Are you surprised with the general results of these elections? Did you expect PDK's victory and the heavy defeat of LDK?

I think that PDK, realistically, won not more than 29-30%, instead of the official 34%. There were, at least partly, frauds. PDK, anyway, is the winner of these elections, as I already acknowledged. Now Mr. Thaci has a real chance to form a new government, considering also the experience he gained during the past years spent in opposition, and I would say that he could be a very good leader. On the other hand, I don't know if he will be able to fulfil all the promises he made during the electoral campaign.

Have you started talks with the other political leaders? Is it possible for AKR to be part of the next government?

I already publicly stated that AKR is ready to have a dialogue with everybody. For the party to join a government coalition, though, there is one condition. I'm ready have talks only with whom is open to fully accept our program. AKR's program stems from Kosovo's everyday life problems. The economic package we propose, based on hard work, foresees the re-evaluation of the role of agriculture, and better opportunities of employment for our youth. As far as I know, our program is the only realistic one, and it's ready to be implemented.

How vital is it for AKR to join the government to carry out this program?

For us it's not essential to be in the next government, because I am afraid that, even if we manage to join the executive, we would be just one of its many stakeholders, and we have nothing to gain from such situation. I think it's better to enter the parliament, and start from there. We'll work for a transparent parliament, able to pass clear and comprehensive laws. These laws must clearly state rights, duties and sanctions for those who don't respect the rules. Up to now, this hasn't happened: the laws voted in Kosovo are complicated and unclear, they just confuse our citizens.

We want laws made for the citizens, not for government officials. We want also to create the conditions to enable the government to work transparently and effectively, cutting down bureaucracy and improving the quality of the administration. At the moment in Kosovo we have 16 ministries, but their activity is often unclear. We want to reduce them to no more than 5 or 6. Today we need a father figure, ready to take upon himself those responsibilities nobody wants accept. That's why we want the president of Kosovo to be elected directly by the citizens.

What will change in Kosovo after these elections? Which are the main problems the new government will have to face?

The new government has a huge responsibility. First of all, it has to boost the economy. Today, the economic situation in Kosovo is disastrous, and 70% of the young people are unemployed. To deal with this challenge, we need people with solid experience in economics, and that's exactly what PDK lacks. Thaci tried to bring into the party some specialists but, if you look carefully, you'll see that they don't have enough experience.

Their program doesn't convince me at all, they are going in the wrong direction, and their proposals are just demagogic. Of course there is also the independence issue to deal with, something that concerns all of us, and not only the government. Independence will come: the problem is how. The Security Council will not take soon a decision, given that Serbia and Russia will resist. To obtain our independence, we must find a way that is acceptable for our American and European friends. Otherwise, Kosovo will end up in a blind alley.

Today AKR is the third political party in Kosovo. Will you ask to join the Unity Team?

Probably yes, also because some of its current members the moderate party "ORA", Author's Note won't enter the new parliament, by not having met the 5% threshold. By the way, they were the ones that criticized me the most during the electoral campaign, and now they realize they are among the losers. Our request to enter to the Unity Team, anyway, will depend on our perception of the quality of the work carried out by this political body.

You have often mentioned the possibility of a direct dialogue between Pristina and Belgrade. What does this mean?

My statements, broadcast by "Voice of America", have been used many times against me during the electoral campaign. Kosovo needs to talk again with Serbia and with Serbian citizens in Kosovo. We will achieve independence, but we must really learn to live together with the Serbs and to communicate with Serbia, which is one of our most important neighbours. Serbs must understand that independence doesn't mean they have lost Kosovo. The borders have to be as open as possible: people, ideas, money and goods must travel freely.

How do you see the decision of the Serbian community in Kosovo to boycott these elections?

I think it was a big mistake. They have lost a chance, because they should have been present here, in Kosovo's parliament, which is their home, to fight democratically for their interests. Kosovo doesn't belong only to Albanians, but to all Kosovo citizens, Serbs too. They made a mistake following Belgrade's advice, where politicians are speculating on the fate of Kosovo Serbs.

You are well known as a successful entrepreneur. Have you invested in Kosovo too?

I employ more than two thousand people here in Kosovo, where I own an insurance company, a big bank, a chain of shops and a building company. It's important for me to stress that my investments are all private. I never worked on publicly funded projects, because Kosovo is not ready for big investments.

But in case AKR joins the government, don't you believe that there would be a conflict of interests ?

Of course, but I am not the first nor the last businessman to enter politics, and such situation can be regulated by law. Besides, I have already given up my position in many of my companies. I am not in politics to support my business. I made all my wealth out of Kosovo. I have brought here only investments and development. I have clean conscience, and I believe I am needed here to guarantee to Kosovo's citizens at least a decent standard of living.

You have important partners in Russia. Do you think that this could prove an obstacle for you to join Kosovo's government?

I think I must reproach Kosovo's political leaders for having built a wall towards east, only paying attention to the west. No doubt that Kosovo's independence would be impossible without the help of our American and European allies. On the other hand, it was a mistake not to communicate in any way with the east: we could have lobbied much more, keeping the information channels open. An example: today all Russian reporters are based in Belgrade, they are not in Kosovo to see what happens on the ground. If they were here, they would realize that, after the damages of the war, after the burnt houses and the death of so many people, it is simply impossible for Kosovo to be under Serbian rule again.