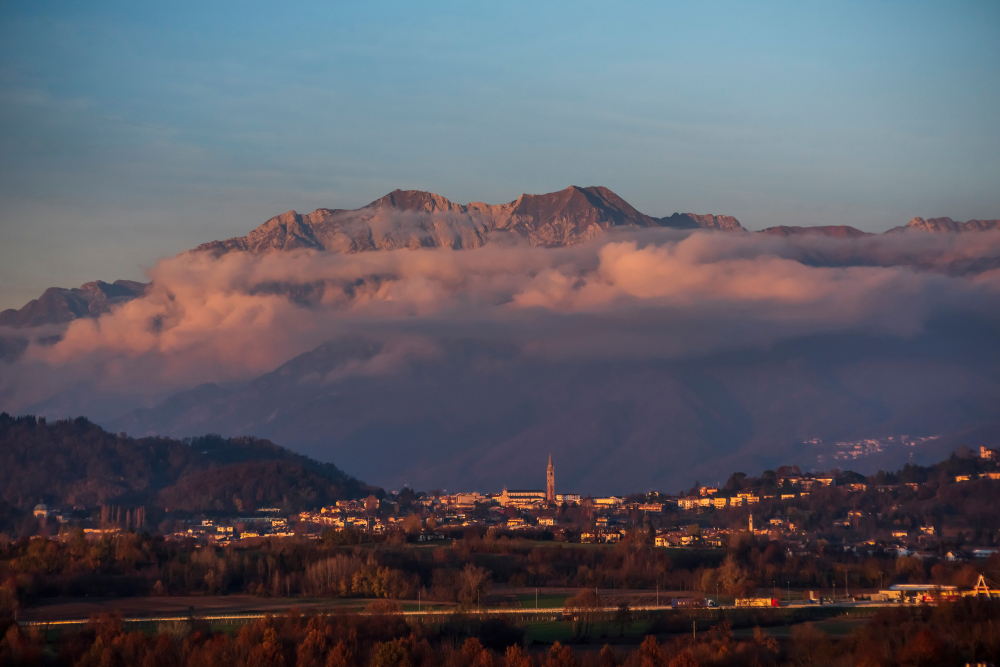 Buja, in Friuli, and the Julian Pre-Alps in the background - © Jay-Dee/Shutterstock

Between Italy and Slovenia there are two natural parks that have been in dialogue for years. We interviewed Antonio Andrich, director of the Julian Pre-Alps Natural Park

Thanks to the long experience of collaboration with the Triglav National Park in Slovenia, the Julian Pre-Alps Natural Park has been involved as a project partner in the Adrion Interreg Dinalpconnect  project. The park's activities are concentrated in the pilot area between Italy and Slovenia, a particularly important "link" between the Dinaric mountains and the Alps. We interviewed Park director Antonio Andrich.

What is the Dinalpconnect project about, what does “ecological connectivity” mean?

The project takes up some aspects of a previous project that was carried out in the Alpine arc, ALPBIONET 2030 , but transferring it on the Dinaric mountains and connecting us to the Alpine arc through our pilot area, between Italy and Slovenia, which is a connection point, a border.

What is ecological connectivity? In essence, it is about understanding what physical and managerial barriers and obstacles can threaten or hamper "free movement", the movement of animal species between territories.

The project focuses on this within pilot areas which are areas straddling various states. This theme of ecological connectivity obviously relates to any environment and any situation, but the goal is to begin a dialogue between countries that obviously have different rules, habits, regulations, and even a different management culture.

The goal is to say: well if this is the situation we have on both sides of the border, if these are the geographical, geomorphological, naturalistic characteristics of this area, let's see what critical elements can somehow condition ecological continuity.

The Julian Prealps Regional Nature Park and the nearby Triglav National Park have been collaborating for years. Among the recent joint projects, Dinalpconnect aims to create ecological continuity between the Dinaric mountains and the Alps. Photostory

For example, hunting management may differ between countries, so that could be one problem; or forest management is based on different principles, perhaps on the one hand there is the management of naturalistic silviculture, on the other hand there is still the productive cutting to level; maybe an animal species on the one hand is considered a native species and on the other an allochthonous species, that is, these are also quite important differences...

In this context, the objective is to begin a dialogue and see if it is also possible from below, also through local partners, to build networks of contact and share contents and perspectives, even knowing that there are some limits because certain decisions are taken at certain political levels: we can make as many beautiful proposals as we want, then we know that we always need will at a macro, governmental level.

The Julian Prealps Natural Park has collaborated for years, on the Slovenian side, with the Triglav Park...

Yes, and we are both part of the Europarc Federation  which is the European Federation of Parks and Protected Areas that connects all protected park areas in Europe. Europarc has identified a network of cross-border parks, i.e. parks which, although on different sides of a border, collaborate and work in the very direction I mentioned earlier, that have begun to carry out joint research, training activities, and environmental information on the same issues that are related to the management of the protected area. In our case, since 2009 we – as the territory of the park plus the territory of the Triglav park and also of the Slovenian Julian Alps biosphere reserve, which is an even larger area – have been recognised as a transboundary ecoregion of the Julian Alps.

In addition, within this ecoregion we have also been recognised within the European charter for sustainable tourism since 2015.

In your “pilot area” of the Dinalpconnect project, do you deal with some particular animal species?

We began to work on guidelines that should highlight possible good practices, policies that favour connectivity with a specific focus on agricultural and forest management issue. In this context we are focusing on chamois, ibex, and then two species of birds, capercaillie and the Ural owl.

For example, the Ibex can be hunted in Slovenia, but not in Italy. For the chamois, for example, we have started sharing the monitoring methods at the basis of management policies.

How are these action plans defined?

The definition of the action plans will take place through workshops that bring together all the territorial stakeholders, including hunters, forestry corps, those involved in forest management, regional offices that deal with biodiversity...

How to relate economic activities and protection of ecological connectivity?

This is another aspect addressed by the project. We started with a territorial analysis for each pilot area on which activities can promote biodiversity, the so-called pro-biodiversity businesses. We are working on a list of these potential economic activities, each territory must identify its own, highlight them, and create a database.

The other work we intend to do will be to write guidelines that will create a sort of lowest common denominator between the various territories in which all these activities will be identified, how these activities can or are to protect of biodiversity, what characteristics they must have, possibly what kind of commitments or rules these economic activities must respect to guarantee this protection.

For example: in some parks like ours, but also Triglav and other Italian parks, there are already ways of involving economic activities. We have the park brand  which is a project born many years ago that somehow recognises this type of activity, whether they are in the agricultural sector, in the commercial sector, or in the tourism sector. Other territories obviously may not have this tradition and therefore the intent of the project is to draw from the experiences that exist in the various pilot areas and create guidelines that can be used as a reference.

How important is communication to bring local communities, public opinion, and citizens closer to the issues of protecting biodiversity?

This dimension is always important, effectiveness varies according to the ability of the various partners to connect to their own territorial reality. Often, unless the projects have very concrete repercussions, such as the protection of a specific species, it is difficult to get visitors interested in a generic sense.

The fact of working with stakeholders through workshops perhaps goes beyond the level of communication, but it is effective because you meet people, you let them understand what you are working on, ask them what they think, suggestions...

Dinalpconnect, for example, is difficult to communicate to a wide audience… talking about ecological connectivity is a concept that can certainly be understood, but is not so immediate. Even the theme of biodiversity is not so trivial... so of course we will do everything to promote the project also from a communicative point of view, but in my opinion the results of this project must reach more than anything those who deal with the territorial system.

What are the advantages and possibly the disadvantages of collaborating with partners that are so different from each other by nature – universities, natural parks, research centres?

This relationship has been inevitably conditioned by the pandemic. There have not been many opportunities to get to know each other. Last September we had the first face-to-face meeting, in Croatia, we also visited one of the pilot areas of the project and it was a good moment of contact, of sharing, these are fundamental moments.

From the point of view of the possibility of exchanging managerial experiences, we substantially did not have any, this is a shame because for us too this was an entire area with which we have never worked: Albania, Greece, Croatia, Montenegro... there were many interesting reasons for exchange that have not been realised up to now.

On the collaboration with different bodies, I must say that basically the project works by pilot areas, all the activities are declined within their own pilot area, and therefore – without travel – there is a limited view of what is being done in the other pilot areas.

After all, we work on different issues linked to ecological connectivity: for example we work on fauna species related to the forest, while they work perhaps on meadows, pastures, or on other types of habitats, situations that are completely different both from an ecological and managerial point of view.

To sum up this experience with the Dinalpconnect project, what development or work opportunities derive from projects like this?

The aim of the project is to identify concrete actions to be carried out in collaboration especially with those on the other side of the border and therefore the practical effects on the territory are mainly managerial. This clearly has repercussions in employment or economic terms, but not as a priority.

We do have the part of the so-called biodiversity businesses. Today, certain choices of production, product, environmentally conscious behaviour also pay off in terms of the company's visibility: our park brand, for example, also goes in this direction, as it intends to give value to those who undertake to respect and promote the environment.