United against plastic in the protected areas of the Mediterranean 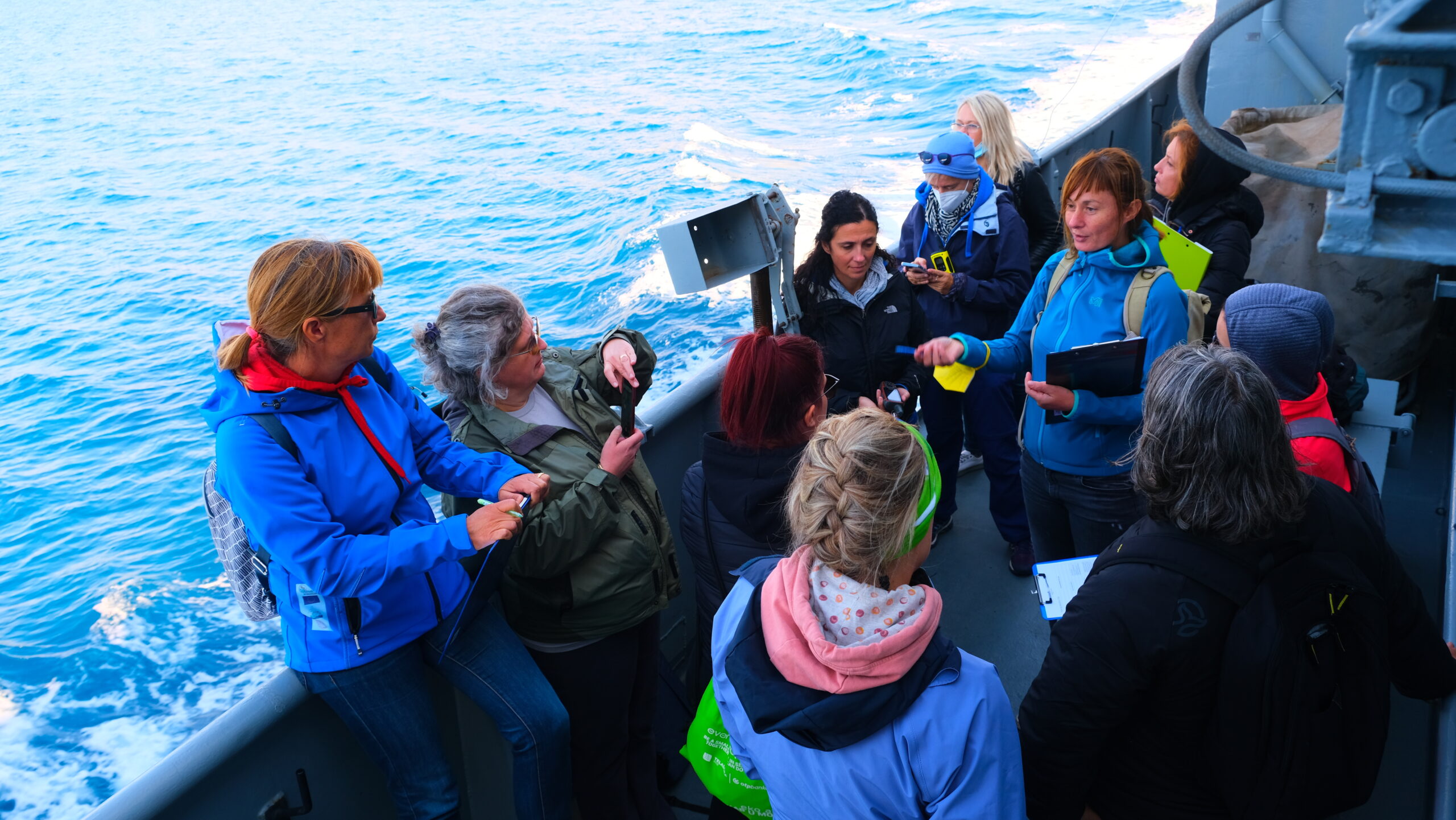 During some activities of the Plastic Busters MPAs project - https://plasticbustersmpas.interreg-med.eu/

Scientific research and good practices. These are the two main elements that for some years have brought together researchers and volunteers from Italy, Spain, Greece, Albania, Croatia, and Slovenia in the fight to safeguard the protected natural areas of the Mediterranean from plastics

The Mediterranean is one of the seas most affected by the presence of plastic waste in the world. From the most cumbersome objects stranded on the coasts to the micro-plastics adrift with the currents, waste is now a constant presence that does not spare even the seemingly most pristine stretches of sea, including protected ones.

Tackling the problem in a sea surrounded almost completely by diverse, densely populated countries is unthinkable without strong international cooperation. This assumption is the basis of the Plastic Busters MPAs  project, financed with 5 million Euros from the European Regional Development Fund and part of the Interreg MED transnational programme between thirteen countries of the Mediterranean area.

The project includes Italy, Spain, Greece, Albania, Croatia, and Slovenia and aims to safeguard the biodiversity and natural ecosystems of the over 1200 marine protected areas (MPAs) of the Mediterranean.

In 2018 the European Commission presented the European strategy for plastics. The measures included improvement of the supply chain and the value chain of recycled plastics, reduction of waste, especially at sea, and of single-use plastics, and support for global and multilateral initiatives on plastics. The strategy set the goal of ensuring that by 2030 all plastic packaging is recycled or reusable in the EU. In September 2018, the EU Parliament promoted the strategy by calling for the introduction of minimum requirements for recycled plastics to be included in European products, stringent quality standards, and legal requirements to reduce microplastics.

Plastic Busters MPAs rests on two pillars. On the one hand, an intense scientific research programme to monitor the real impact of plastic on organisms, from invertebrates such as sea urchins to large marine mammals, and establish reliable methods for comparing the data collected. On the other hand, promoting good practices to prevent the arrival of waste at sea and mitigate its effect, with the idea of encouraging cooperation between the protected areas of all the countries bordering the Mediterranean.

If the initiatives to reduce plastic in the seas have been multiplying for years, Plastic Busters MPAs is the first to act on a "Mediterranean scale, in which countries join forces to tackle the problem of marine litter, with a coordinated approach", declared Maria Cristina Fossi, ecologist at the University of Siena, who coordinates the project.

Plastic Busters MPAs, in fact, was born as an offshoot of Plastic Busters, another initiative launched by the Tuscan university in 2016, joined by all 43 member countries of the Intergovernmental Union for the Mediterranean (UfM).

From the sea to the lab

In the first phases of the project, the scientists committed to establishing shared methodologies to monitor both the abundance of waste in the various protected areas and its effects on marine wildlife.

Between spring and autumn of 2019, four expeditions set sail in as many marine protected areas of partner countries. From the park of Cabrera in the Balearics to Zakynthos, in Greece, passing through the Tuscan Archipelago and the Pelagos Sanctuary of marine mammals (the vast area that includes the Ligurian Sea, the Northern Tyrrhenian Sea, Corsica, and part of the French Riviera, particularly rich in cetaceans), the researchers were thus able to directly study waters, sediments, and organisms of marine protected areas in search of the effects of plastic on the ecosystem.

After days spent in the sea collecting microplastics (fragments of less than 5 millimetres) at different depths, sampling sediments and marine organisms, and observing floating waste and surveying wild animals, the action moved to the laboratory.

While in the ISPRA laboratories of Milazzo and Messina the researchers focused their efforts on species of great commercial importance such as the European anchovy, the Spanish Institute of Oceanography and the Oceanographic Center of the Balearics focused on sea urchins, sea cucumbers, and species of fish present in the Cabrera park.
The University of Siena, on the other hand, carried out a large number of biopsies on large endangered species such as sperm whales and sea turtles.

The Hellenic Center for Marine Research (HCMR), on the other hand, has studied the ingestion of microplastics in mussels, fish, and also two endangered species symbol of the Mediterranean, the Caretta caretta turtles and the monk seal.

In addition to research institutes and park management bodies, an important role was also played by volunteers and NGOs, most of which part of MIO-ECSDE, the non-profit Federation of 133 Mediterranean NGOs for the environment and sustainable development. The Greek NGO Archipelagos, for example, did its best to search for the elusive monk seal among the cliffs of Zakynthos.

Protected areas are not safe either

The final results have not yet been published, but what is known so far confirms that plastic is omnipresent even in the most intact marine areas.

One of the values that are usually considered is the amount of litter on the beaches. To be considered in good condition, according to European directives, on a beach the garnish of waste (macroplastics) should be less than twenty per hundred linear metres. "But in all the areas studied, the values were at least ten times higher", comments Catherine Tsangaris, of the Hellenic Institute of Marine Research. 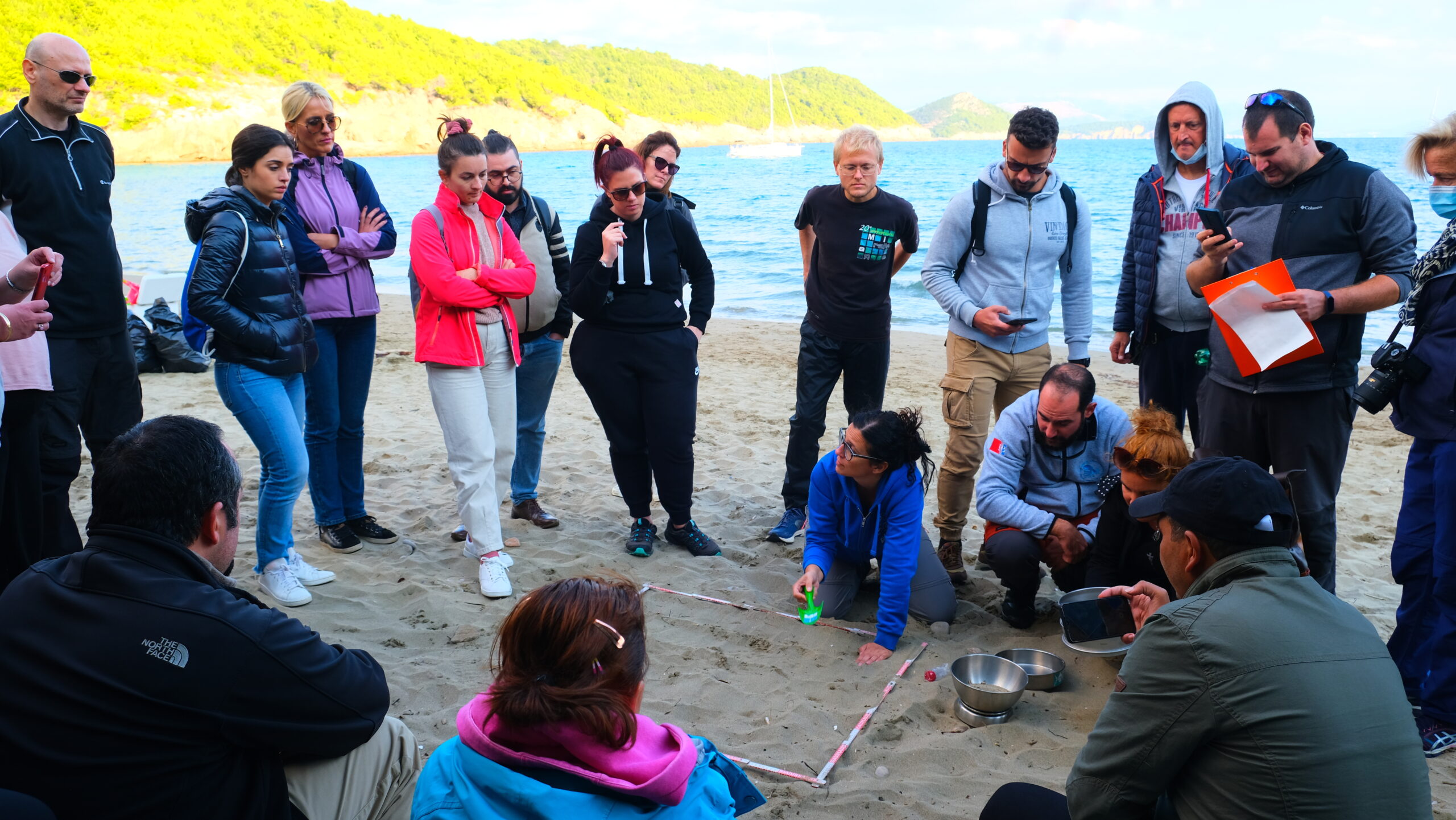 During some activities of the Plastic Busters MPAs project - https://plasticbustersmpas.interreg-med.eu/

If part of the waste comes from afar, carried by currents, a large part of the plastic is of local origin. On the Greek island this is even prevalent. “It should be borne in mind that, even if they enjoy particular protection, marine parks are also tourist destinations, and this poses an additional challenge”, continues Tsangaris.

The researchers sought to assess the percentage of organisms that had ingested plastics, from invertebrates such as mollusks and sea urchins to whales, and any effects on their metabolism.

In all the areas considered, the researchers thus found that half of the organisms sampled had ingested plastics, with percentages ranging from 10% for swordfish to almost 80% for sperm whales. Even if the data have no statistical value given the very low number of samples collected, for the monk seal the observed percentage reaches 100%.

"We expected that the percentage of organisms that ate microplastics would be lower within protected areas", comments Tsangaris, "but at least in Zakynthos the values are practically identical".

Researchers from the Greek HCMR's Institute of Oceanography also assessed the genotoxicity of ingested plastic, that is, the possibility to cause genetic mutations and tumours. Fortunately, since each individual had ingested only one or two fragments on average, no particular problems were encountered. But since ingested plastic is likely to increase over time, we cannot let our guard down.

In addition to research, the project involves concrete actions to better address the entire marine litter management cycle, with prevention and mitigation actions. The partners have developed a series of measures to capitalise on the results obtained not only from this but other related projects, under the European Directive on Marine Strategy and the Barcelona Convention on the management of marine litter in the Mediterranean.

“Plastic Busters MPAs will create and implement at least 10 demonstration projects on marine litter”, reads the official website, in as many marine protected areas. The lessons learned will be collected in a series of comprehensive guidelines to support replication actions, with the aim of creating an "exponential transfer" that spreads to other marine parks.

This is what has happened in recent weeks in the new marine protected area of Platamuni in Montenegro, and of Debeli Rti/ Punta Grossa in Slovenia. Based on the project's many years of experience, the Montenegrin park has started a programme to reduce fishing-related waste, while the Slovenian one has created a network of beach bars free from single-use plastics.

In autumn 2021, in four Italian and French municipalities located within the area of the Tuscan Archipelago National Park and the Pelagos Sanctuary, the Plastic Busters team involved local businesses which signed a declaration of intent to reduce the use of single-use plastics from their activities.

In the protected areas, events, workshops and conferences were also held to share the know-how obtained during the project.

In Vlore, Albania, a conference was held at the end of February with over one 110 participants, including senior officials such as Albania's deputy minister of Tourism and the Environment.

On the Ebro Delta in Spain, however, last November managers of protected areas, environmental NGOs, and local politicians sat at the same table in a two-day workshop.

The same happened in October in Dubrovnik, where after a great conference the Plastic Busters team held specific training for managers of protected areas and administrators of the region.

As plastic continues to accumulate in the Mediterranean, efforts to stem it multiply. But if so far each country has mainly acted for itself, initiatives such as Plastic Busters show that working together is the only way. Also according to Alessandra Sensi, Head of the Environment and Blue Economy Sector of the UfM: “Plastic Busters shows how unprecedented commitment and collaboration on marine litter and the circular economy can make a difference”.