Dealing with the Past and Reconciliation with the Balkans

On behalf of the whole Osservatorio Balcani e Caucaso let me thank our partners and all of you for joining us today and let me express the enthusiasm for convening our first European joint conference after years of common work.

The relation with the past and the reconciliation processes in the Balkans have always been central issues in the work of Osservatorio Balcani e Caucaso. An important step in reflecting on these issues was the 2007 conference in Rovereto, Italy, where we began the discussion on what was called "Bad Memories". This discussion focused on one hand on the relation between the memory of WWII and the wars in the 1990s and, on the other, the politics of memory in former Yugoslavia and that of the successor states.

Dealing with the Past and Reconciliation Processes in the Western Balkans, Vienna 10-11 November and Bad Memories

After years of work on the reconciliation process in the Balkans, in 2008, Osservatorio Balcani e Caucaso committed itself to an in-depth analysis of the past and the present of the border area between Italy, Slovenia and Croatia - in other words, the Upper Adriatic. The project AestOvest examines this region's common historical experience and conflicting memories.

Thus, this article focuses on Italy's efforts to deal with the past and reconciliation processes WITH south-east Europe.

Since the 1990s, a process of historical re-analysis of the twentieth century experience has been taking place all over Europe. The end of the cold war allowed new reflection on the tragic history of our continent as well as of each local history.

A democratic analysis of the European past seemed to be the promise for a new start all over the continent, including the Upper Adriatic. A few important steps have been taken. For example, in 1993, Italy established two bilateral cultural-historical commissions together with Croatia and with Slovenia. These teams of experts were asked to develop shared narrations of the common history of the twentieth century.

Nevertheless, these early, forward-looking experiments encountered many obstacles. The Italian-Croatian commission did not even start working. The Italian-Slovenian commission published its report in 2000, but those results had limited dissemination because an inward-looking approach to the past began to prevail.

Each country focused on its internal political issues and, in the case of Italy and Slovenia, on its needs for national reconciliation between left and right. Italy struggled through a strong identity crisis. Slovenia became busy with its state-building process.

The tendency to focus primarily on the internal political arena predictably becomes a problem in the age of global communications. Two particular events illustrate the effects of confining politics to the national public sphere. First, in 2005, the Italian state television produced a film, Il cuore nel pozzo , which presented a highly simplified narration of the post-WW II relations in the Upper Adriatic; Yugoslav partisans were depicted as ruthless and cruel, harming Italian innocent children (Juri 2005) (Rossini 2005). Second, on Italy's Remembrance Day in 2007, the Italian president, Giorgio Napolitano, gave a commemorative speech that referred to "blood-thirsty Slavs" committing atrocities against Italians during and after WWII (Grubiša 2007). Both cases obviously provoked reactions in neighbouring countries (Zanoni 2005) (Matvejević 2005) (Hedl 2005) (Juri 2008).

As in many other parts of Europe, the Upper Adriatic has many historical contentious issues that need to be analysed; deaths that should be mourned; and memories that require public recognition.

Indeed, the WWII-related foibe - mass killings of thousands of people in 1943 and 1945 - and the expulsion of most of the Italian community from the Balkans were ignored during the cold war but remained important events of the Upper Adriatic history. To commemorate these events, a monument was built in Basovizza (Trieste) and, in 2004, the Italian parliament introduced a national Remembrance Day on February 10th, the anniversary of the Paris Peace Treaty signed in 1947.

In response to this new Italian commemoration, a "conflict on dates" has emerged. Slovenia introduced a holiday on September 15th (when the same treaty entered into force) to celebrate Slovenia's acquisition of the Litoral region. Meanwhile, Croatia fixed September 25th as the celebration of Istria's integration into Yugoslavia, although on this date the first foibe wave began in 1943 (Crainz 2008: 189).

Slovenia is undergoing similar efforts to internally reconcile left and right political forces as well as in Italy . As part of this reconciliation for example political debates and new commemorations focus on the persecution of anti-communists and of the Domobranci during WWII the Slovenian militia collaborating with the Nazis, Translator's note.

One can question whether these left-right reconciliation efforts successfully create a new climate between the conflicting memories in Italy or in Slovenia (Verginella 2008:7). However, the problem remains: why can't we simultaneously achieve national and transnational reconciliation?

Looking for the answer, Osservatorio Balcani e Caucaso considered some of the most important sites of memory that, together with commemoration dates, shape collective identities. The Upper Adriatic is filled with such sites of memory.

Along with the previously mentioned Basovizza, another important example is Redipuglia. This monument symbolises the fascist regime's attempt to construct an Italian national identity. The immense monumental area was built in 1938 to honour hundreds of thousands victims of WWI, only on the Italian side. The monument was designed to impress the visitor with its grandiosity and severe architecture. The intent was to glorify the martyrs of the nation immediately before waging a new war to satisfy the Italian imperialist ambitions. Certainly, Redipuglia did not intend to encourage empathy for the enormous tragedy of WWI and, surely, the monument did not generate compassion for the deaths on the opposite side.

A similar lack of compassion characterises many renowned communist memorials in Yugoslavia. For example, at the 2007 conference, the documentary by Osservatorio Balcani e Caucaso, The circle of memory, examined the monument to the Sutjeska battle during WWII. Here, the heroic narrative of the partisan war against Nazism reached one of its extremes. At Sutjeska, the bodies of the defeated enemies were not even buried.

Authoritarian regimes are known to manipulate history. However, democracy creates space for critical analyses of the past that can always be vulnerable to demagogic manipulation. Furthermore, everywhere, even in democratic contexts, acknowledging responsibilities of one's own side - whether political or ethnic - is difficult.

In Italy, the post-WWII establishment of democracy did not bring about a public recognition either of fascist repression of south Slav minorities, or of the consequences of the 1941 invasion of Yugoslavia. These events achieved little public awareness in Italy. Only recently, historians have made an effort to acknowledge these facts.

A few years ago, a commemorative plaque was placed in front of the Narodni Dom, the building in Trieste that served as a base for Slovenian civil society organisations and business enterprises at the beginning of the twentieth century. Fascist militia burned down the building in 1920 because it offered a tangible sign of the significant Slovenian presence in Trieste. On the eve of WWI, in fact, around one quarter of the inhabitants of Trieste were Slovene nationals.

One should note that the plaque on the building was placed only after the Slovenian minority in Trieste struggled for years to achieve recognition of their sufferings. The achievement is currently partial as, still, the commemorative ceremonies mostly gather Slovenian nationals and are not the occasion for Italians to accept responsibility.

Indeed, the recognition of crimes committed on behalf of one's own nation or political party is a long and painful process. 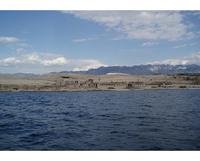 Osservatorio Balcani e Caucaso also considered a place in the Upper Adriatic where no monument has been built: Goli Otok, an island in Croatia. The simple name evokes the darkest years of the Yugoslav communist regime. On the island, no monument commemorates the victims of the labour camp for political prisoners. Both victims and perpetrators in the prison of Goli Otok were communists; thus, the post-communist Croatian state neglected the site because the former prison labour camp could not be used to construct national or political identities (Pavlakovic 2008).

The camp's current state of decay indicates the lack of public reflection on, and condemnation of, political violence.

In conclusion, one should consider another symbolic place in the Upper Adriatic: the Transalpina Square in Gorizia. After 1947, the state border between Italy and Yugoslavia divided this square. From being a symbol of the cold war's ideological divisions, the Transalpina Square turned, in 2004, into a success of the European Union integration process.

Indeed, the only forward-looking approach to war memorials can be found in the EU integration process because this integration can guarantee the necessary political stability and economic prosperity. However, the lack of common reflection on the past remains, and much work needs to be done on historical analysis.

Since 1989, the European Pandora's box has been opened; this includes the re-emergence of memory of the extreme violence suffered in this continent - and in this area of Europe. The urgent necessity to develop a common narrative of the past becomes evident. The two reconciliations - the national and the transnational - are not necessarily mutually exclusive if they are sought in the light of democratic principles and European values.

In the Upper Adriatic, as in the rest of Europe, shared narrations must emerge in the European public sphere. Together with new symbols and sites of memory, these shared narrations need to convey three values: the assumption of responsibilities, the compassion for the other's sufferings, and the unconditioned condemnation of violence.

A site of memory, combining these three characteristics does not exist yet. If the return of war in Europe in the 1990s was not enough, the frequency of historical contention at transnational level suggests the strong need to commit ourselves to reaffirm these European values.