Rijeka and the memory of the Nineties 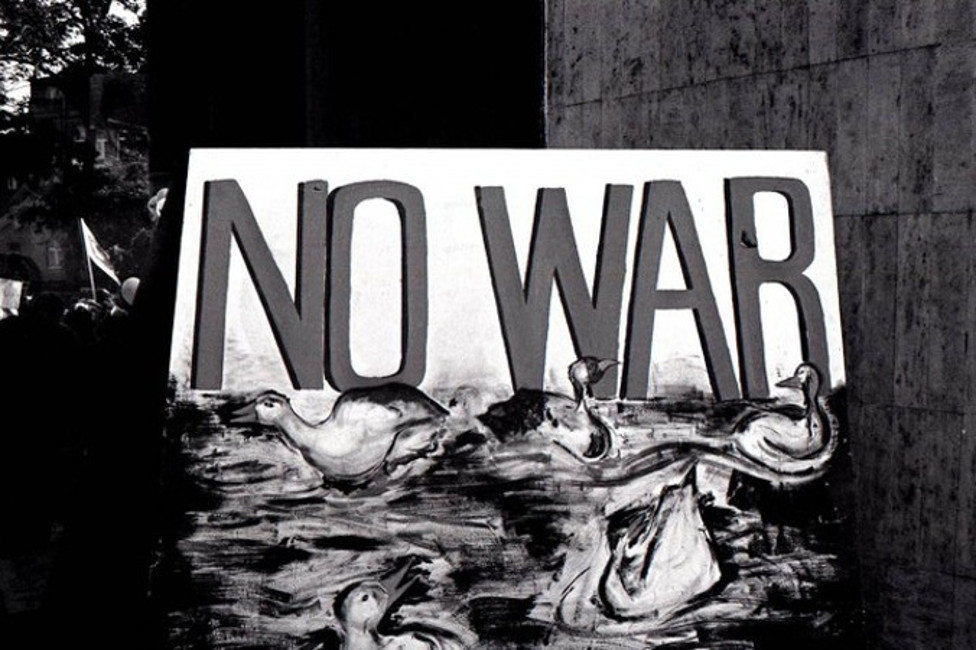 Remembering the Nineties through the direct testimonies of volunteers, in the Croatian city that will be the European Capital of Culture in 2020

In 2020, Rijeka will be the European Capital of Culture, a title gained by competing with other Croatian cities thanks to the project "Rijeka – Port of Diversity". Since the nomination in March last year, preparations have started in the city on the Kvarner Gulf. The goals set for the project include a focus on the city's rich past. Rijeka is one of the main urban centres of a European frontier area that has known fascism, communism, migratory flows, and the tensions that characterised the twentieth century. However, seeking to go beyond the imaginary related to the conflicts in this area – particularly strong in Italy – the project aims at highlighting the experience of contact, relationship, and exchange in the city's history.

As of now, it is difficult to understand how much space "Port of diversity" will dedicate to the memory of the Nineties. During the Yugoslav dissolution wars, warfare barely touched Rijeka and Istria. This does not mean, however, that these territories have not suffered the consequences of the conflict – military mobilisation, refugee flows, nationalist tensions. As in the rest of the country, the public memory of the "patriotic war" is mostly focused on the military aspects and on the celebration of the final victory. More than elsewhere, new readings are proposed in Rijeka, but this does not mean that the dominant narrative is easily questioned. Suffice to remember the 20th anniversary of Operation Storm in 2015, chronicled for OBCT by Francesca Rolandi, when the organisation of an event at the national theatre aimed at presenting "alternative" testimonies of the conflict caused controversy and violence in the city centre.

A gateway to the Balkans

The testimonies collected by OBCT in the framework of the project "We were looking for peace", devoted to the solidarity mobilisation of Italian civil society in the former Yugoslavia, tell us more on the recent history of Rijeka and this border area. Dozens of testimonies remind us how in the early Nineties the city was for many people, in some way, the place where they came in contact with the Yugoslav wars.

When Italian pacifists became concerned with the conflict, they saw in these lands a gateway to the Balkans, not just in geographical terms. The first stop of the Caravan for Peace that, in September 1991, brought about 500 activists and pacifists to Ljubljana, Zagreb, Belgrade, and Sarajevo was Rijeka, where the first meeting with the representatives of local civil society took place.

However, what makes the Italian solidarity mobilisation towards this territory particularly interesting is the fact that the region of Rijeka hosted thousands of war refugees – according to some estimates, already 40,000 people in August 1992. In many cases, those who fled the war were hosted in hotels or other structures in the area (Jadran, Ičići, Pionir, Uvala Scott, Fužine, Novi Vidovolski, Učka), but also in dozens of private homes.

"An entire people besieges Rijeka", titled Italian newspaper La Repubblica as early as in May 1992. A volunteer remembers how serious the situation was: "Rijeka was a three-hour drive from home. In the province of Rijeka, there were 18,000 refugees. People who needed everything". For many groups, then, Rijeka became the place to attempt some form of first intervention, sometimes responding to appeals from across the border: "In 1991 we received a request for humanitarian aid from Rijeka. From there we started our journey, primarily with humanitarian aid, medicines, and so on for the city hospital".

Geographic proximity and widespread knowledge of the Italian language favoured the new relationship between Italian volunteers and the city. Experiences were diverse, but in most cases the people of Rijeka played a fundamental role. Among the Italian minority, a prominent role was played by Giacomo Scotti, who recalled the experience in a recent book. But there were also many people in the pacifist, feminist, and anti-nationalist circles who committed to help, despite the difficulties related to Croatia's political climate at the time.

The testimonies cite many associations which were active – Suncokret (Sunflower), Duga (Rainbow), Iskra (Spark), Ariadna (Ariadne) – as well as figures of doctors, social workers, and managers of refugee camps, to whom Italian volunteers turned to consolidate their initiatives.

The testimonies illustrate the new perception of the Rijeka context which was emerging among Italian volunteers – partly idealised, but certainly far from the one created by the events of the Second World War: "We began to consider the idea of a close relationship with that territory, which was also a place of asylum in Yugoslavia itself. Croatia was already independent – nevertheless, the area of Rijeka had always been considered by everyone as a territory not marked by nationalism. That was one of the reasons it gave asylum to many". Over the years, relations were established between Rijeka and dozens of groups and committees from all over Italy, including Genoa, Trieste, Naples, Trento, Lucca, Padua, and so on.

Bosniaks and Italians in Rijeka

In the first phase, the emergency affected displaced people from conflict zones in Croatia, who were mainly hosted in the hotels of the coast. Since 1992, with the outbreak of the conflict in Bosnia-Herzegovina, more and more Bosnian refugees, including many Muslims, began to flow to Rijeka, putting further pressure on the reception system. The city came to face ever more marked contradictions, as a volunteer remembers: "You would go to check on the situation and find that there was a tremendous contrast in Rijeka – the city had remained relatively untouched, it was still wealthy enough for a war situation... but then you would see those poor refugees in disastrous shacks".

Thanks to well-established contacts and the opportunity for frequent trips (given the proximity to Italy), activities in the Rijeka area had the chance to go beyond the mere humanitarian, emergency approach. Here, relationships were built that shaped the evolution of the most politically conscious aspects of solidarity, including forms of long distance adoptions that aimed not just to support families, but also to build relations of exchange according to the principles of what was then called "people's diplomacy".

Rijeka, then, became a meeting place: "One thing we did, at least twice a year, was to organise trips to Rijeka to meet people. With a lot of respect for them, as it was not easy to bring the benefactors to the recipients of aid. So everything had to be prepared, both here and there, everything had to be managed".

The testimonies show the widening of the intervention areas of the groups, illustrating the living conditions of refugee communities in the area: "We took over an extra-territorial school, 20 kilometres along the coast from Rijeka. Here, former Bosnian professors and mothers with children, all without husbands, had set up a school in an ex-hotel and continued to teach these children. So we started to take care of that school, we would bring them anything they needed".

Other testimonies recall the collaboration in organising local initiatives that had some impact on Rijeka's public life in the war years – concerts, pacifist demonstrations, and even the Bajram festival for Bosnian Muslim children at the city hall.

Naturally, these relationships were far from easy. On the one hand, the initiatives of groups and committees had to deal with their own inexperience, contradictions, and the difficulties of humanitarianism, and they would not always succeed. On the other hand, in the Nineties Rijeka was by no means immune to intolerance, nationalism, and hostility to those who were considered "strangers" to newly independent Croatia – for example, this could result in discrimination against Muslim refugees, particularly after the outbreak of the Croatian-Bosnjak conflict in Central Bosnia and Herzegovina.

From Rijeka to the southeast

In the refugee camps of the high-Adriatic areas, in Croatia and Slovenia, many initiatives were born to support the territories at the centre of the conflict at that time, particularly in Bosnia and Herzegovina. In many cases, it was the direct relationship built with the people fleeing from war that created the chance to expand the solidarity intervention, both during the conflict and – more structurally – after the end of hostilities.

The voices of witnesses tell the circumstances, sometimes almost random, that led to new initiatives: "Some of the people we were in contact with were from Gračanica, in Bosnia. At one point, after a year of doing this, they asked us to try and go to Gračanica, that was then in the worst period of the war, go talk to the institutions, and see what could be done".

The commitment to other territories was expanded because of political awareness or in order to respond to requests for help coming from local contacts, or because of a combination of both motivations. For this reason, the experience in Rijeka was followed by more articulated projects in Bosnia and Herzegovina – including Mostar, Gradačac, and Prijedor – but also in Serbia, in Novi Sad and Belgrade.

The testimonies of Italian volunteers – although partial and subjective – encourage us to recapture aspects often forgotten of Rijeka's experience during the conflict of the Nineties. Refugee flows, the management of the issue by the authorities, the role of communities, the contradictions and tensions, but also grassroots initiatives and the transnational dimension of conflict – these are issues that are often marginalised in public memory. However, they somehow represent experiences common to the various countries affected by the Yugoslav conflicts, which involved thousands of people.

The "Port of diversity" project, in its quest to investigate the city's past and highlight it in a broader perspective, can be an opportunity to look at the years of the Yugoslav dissolution conflicts from the unprecedented points of view offered by the local dimension. For Rijeka, this may mean rethinking a season of encounter that, in its tragic nature, had its protagonists both in the people of Rijeka and in those who, for different reasons, were brought there by the war in those years – in another chapter of the history, never to be taken for granted, of this border territory.