Greece, the opposition rallies in Athens against the Prespa Agreement 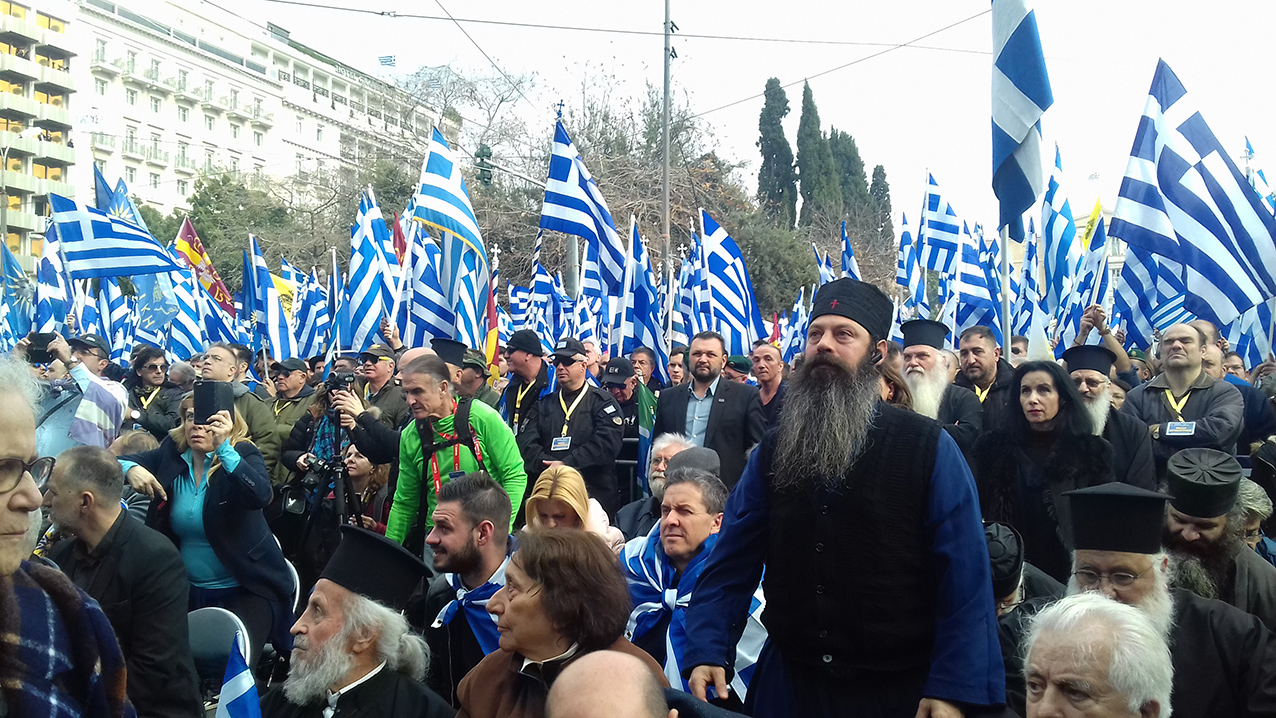 This week the Greek parliament should ratify the Prespa Agreement, which puts an end to the twenty-year dispute over the name with neighbouring Macedonia. The opposition, however, took to the street in Athens against the deal

The miniature Greek flags were sold from 1 to 2 euro, the biggest ones were advertised for 10. Vendors who sold memorabilia with Greek, Byzantine and ancient Macedonian symbols and occasionally junk food were placed strategically on the way from Acropolis to Syntagma, where the demonstration against the Prespes name deal had been scheduled for 14.00 on Sunday, January 20. People had started gathering much earlier and the loudspeakers were dominated by patriotic marching songs.

The demonstration, organized on Sunday in the heart of Athens, managed to gather thousands of protesters from all over Greece, who underline that FYRO Macedonia shouldn’t have the right to use a name that is historically and culturally related to Greece and demand a referendum on the Lake Prespa agreement. While the ideological spectrum of the opponents to the deal is wide, and at least in the parliamentary level includes also socialist parties let alone the right-wing New Democracy that has been campaigning immensely against the agreement, the anti-deal protests host a significant amount of far-right elements.

The latter was evident in the clashes that marked the end of the rally. Among the riots, police’s teargas and general turmoil, several people were injured and among them at least 6 media employees.

According to the Greek Union of Photojournalists the attacks, carried out by fascist groups, were planned beforehand. Groups holding Greek flags and wearing clothes with Byzantine symbols, carried also pictures of reporters to be able to target them amid the crowd, the Union says.

Photojournalist Kostis Ntantamis of Sputnik International was heavily beaten on the head and got his equipment stolen by people shouting deadly threats, as the journalist stated in the Greek newspaper “Efimerida Ton Syntakton” on Monday.

The Lake Prespa deal, namely the agreement that should put an end to the name dispute between Greece and the Former Yugoslav Republic of Macedonia was signed by both parts on 17 June 2018. According to the deal, Macedonia will change its constitutional name in the Republic of North Macedonia, in return Greece will stop vetoing Skopje's accession to the European Union and NATO.

The agreement needs now to be ratified by the Greek parliament and it is expected to be brought for voting later this week. The SYRIZA-led government whose right-wing partner ANEL left their coalition, has already secured a confidence vote last Wednesday and seems it will find the 151 MPs that are needed to pass the agreement.

Having 145 MPs, SYRIZA will most probably be supported by three MPs (Theodorakis, Lykoudis, Mavrotas) of the small, centrist party TO POTAMI, the Minister of Tourism (Kountoura) who was expelled from ANEL after differentiating herself from her party’s line, two MPs who were ousted from their respective parties for same reasons (Danellis, Theoharopoulos), an independent MP who also holds a ministerial position (Papakosta) and a member of ANEL (Papachristopoulos), who despite having confirmed already he will back the deal, probably won’t be booted from his party due to the small size of ANEL's parliamentary group, which would be dissolved if its members become less than five.

While the most likely scenario is that the Greek parliament will adopt the Prespa name deal – and probably with one or two votes more than the minimum needed - the government may have to deal with the fierce dissatisfaction of part of the Greek society in the upcoming European and municipal, scheduled next May, and the in national ones, officially set for the last months of 2019, while the possibility of snap elections cannot be excluded.