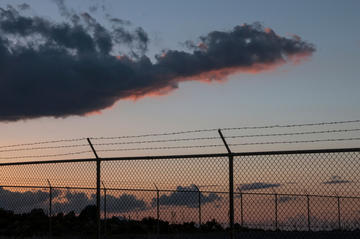 A group of members of the Association for Juridical Studies on Immigration (ASGI) was taken into custody by a mixed patrol of Greek policemen, border police and Frontex agents during a technical-legal visit at the Greek-Macedonian border near Idomeni, in Greece, was brought back to the border crossing point and forced to return on foot to Macedonian territory

Once reached the small town of Idomeni, the group made a quick exploratory on-site inspection near the railway station, a strategic place to understand and analyse the dynamics of border crossing, violations and push-back procedures conducted by border police1. After walking a few meters along the tracks leading from the railway station to North Macedonia and without entering the transit zone, visibly delimited by a barbed wire fence, the delegation returned to the station along the railway. While walking this short distance, the group was approached by an agent wearing the Frontex uniform who immediately asked for documents and the reasons for their visit in that area. Immediately afterwards, a Greek police officer arrived and, in a decidedly more altered tone, asked for an explanation of their presence in that place, claiming that the delegation was in a military and therefore banned area, although there was no sign in regard.

Within a few minutes the group was quickly surrounded from several sides by about ten agents (at least three Frontex agents, one agent wearing a black camouflage suit with an eagle sticker and at least three Greek policemen) and accused of irregularly crossing the border, even though the passage through the crossing point, an authorised one, would have been easily able to verify. Shortly afterwards, an armoured Greek police van with tinted rear windows arrived and the group was forced – by using also verbal violence – to get in; furthermore, the identity documents of all the members of the group were held by the police without any information being given about the reasons for its confiscation.

The group was taken to the local police station where there was also a large hut with mattresses placed on the ground, in which a group of six migrants, evidently intercepted during border control operations, were locked up and made to get out of the back of the same truck. After having been verbally attacked by the policeman present at the police station, the delegation waited in the outdoor area during the ongoing controls.

Despite the validity of their identity documents to cross the Greek border, the four Italian citizens were taken by van to the Evzoni border crossing point, escorted by two Frontex cars, and forced to leave EU territory by walking to the border crossing point in North Macedonia

ASGI denounces the overall treatment suffered by ASGI’s delegation, who, without having committed any offence, have been deprived of their freedom of movement by means of deliberate verbal violence, without receiving any explanation as to the reasons for their detention, despite expressed and repeated requests to that effect;

ASGI also expresses its dismay linked to the forced return of European citizens from an EU Member State to a third country and the informal procedures used.

Finally, this episode demonstrates clearly what happens to foreign citizens intercepted along that section of the border. Therefore, ASGI cannot avoid expressing its deep concerns about the violation of rights and the systematic violence by the European authorities against foreign citizens, including those in vulnerable conditions.