Territorial Integrity and Democracy in Georgia 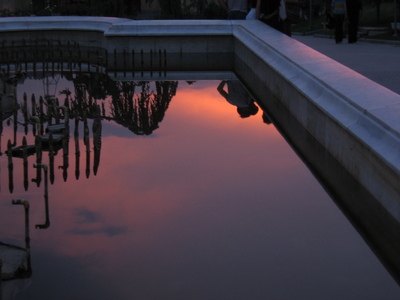 Twelve months after the conflict in South Ossetia, tension in the border area is running high again. In reality, Tbilisi does not expect renewal of the hostilities, but there is concern about domestic politics. An article by our correspondent

Tension surrounding the de facto border which divides South Ossetia from the territory controlled by Georgian authorities is high again. There was an exchange of gunfire between the Ossetian and Georgian sides for more than one hour on 29 July. Both sides accuse each other of having fired the first shot. The Russian Ministry of Defense issued a statement in relation to the incident:

"In case of further provocations from Georgia constituting a threat to the population of the Republic of South Ossetia or the Russian military forces deployed in the region, the Russian Ministry of Defense will have the right to use all means at its disposal in order to defend Ossetian citizens and the Russian troops."

But a recent statement by the de facto President of South Ossetia, Eduard Kokoity, has given rise to even more serious concerns in Georgia. "There are very serious territorial issues which we have to take into consideration", said Kokoity, "and I particularly refer to the Truso canyon; an absolutely Ossetian land presently under Georgian rule which, for incomprehensible motives, at the times of the Soviet Union, was not included in South Ossetia. Now we have to raise the issue of how to accede this territory to Ossetia."

The Tbilisi government has naturally appealed to the international community to pay close attention to what is going on in South Ossetia. Georgian authorities, however, seem to believe that a new war with Russia is not imminent. Shotia Utiashvili, head of the analytical unit of the Ministry of Interior, said to a reporter, "Theoretically, we cannot exclude anything but, strictly speaking, we do not expect a large-scale military operation."

The situation in Tbilisi is calm and people do not seem to be especially worried. Before Joe Biden's visit - the US Vice President visited Georgia on 20 July - it was often said, including on TV, that the probability of a new war with Russia was high. This rumor has now subsided.

Biden's visit was a turning point for Tbilisi, and not only because he reasserted United States support for Georgia. For more than 100 days starting on 9 April, continuous protests organized by the opposition blocked the city center, especially on Rustaveli Street, the city' major traffic artery and home to the Parliament. "Cells", the symbol chosen by the opposition to indicate the authoritarian tendencies of the Georgian government, were displayed all over this street. But Biden's visit changed all that. In order to guarantee the security of Biden, who stayed in a Rustaveli Street hotel, the opposition agreed to call off its protest. On the other hand, given the failure of the protests, the opposition leaders were perhaps only looking for an excuse to leave the streets without losing face.

Now things have gone back to normal and dense car traffic once again clogs the lanes of Rustaveli Street. The "cells", symbols of the opposition, were removed a few days ago.

Two months ago, the spokesperson for the National Forum, a movement which unites several opposition parties, announced plans for a large protest "with over one million protesters" to be held on 7 August, the anniversary of the conflict in South Ossetia. However, the opposition has not mentioned the protest recently.

"They will not protest", says Marina Muskhelishvili, docent of political science at the State University of Tbilisi. "Representatives of the opposition fear that protest on the day of the anniversary could be used for manipulation, also because there has been speculation in the media in Georgia that Saakashvili's opposition was supported by Moscow."

Georgian government officials have, on many occasions, accused the leaders of the opposition of being financed and supported by Russia.

"They meet with Russian businessmen; people close to former President Shevardnadze who sought asylum in Moscow after the Rose Revolution", says Irakli Kavtaradze, a pro-Saakashvili MP comfortably seated in an armchair in his office in Parliament. " I am not against the opposition per se. Everyone is entitled to their own opinion and to the right to express it through protest. But I am concerned by the fact that they seek support from the very country which is occupying a large part of our territory."

Opposition activists do not seem particularly concerned with the accusations of collaboration with Moscow. However, they all agree that after the failure of the spring protests, there is a need to come up with a new strategy and to reorganize. The goal has not changed: to bring an end to the Saakashvili government and to lead Georgia toward democracy.

I have met with Dachi Tsaguria and Irakli Korzaia who are among the founders of the major youth protest movements which have taken part in demonstrations in the past months. They told me they had suffered police violence on many occasions and that they had been arrested. "We live in an authoritarian state and we cannot accept it", they say. "We do not support any of the opposition parties in particular but we want democracy for Georgia, including free media, independent judges, and respect for our civil rights."

I have confirmed the verity of these accounts with Sozar Subari, Georgia's public defender. "It is all true", he tells me in his spacious office, located a short distance from Freedom Square. "Episodes of violence against representatives of the opposition have been very common in recent years and, by now, they have become systematic. The police are accomplices and it is often policemen who directly carry out acts of violence and beatings. In these cases, the authorities do not investigate seriously and, despite a lot of evidence and many witnesses, perpetrators are not punished."

Twelve months after the beginning of the conflict in South Ossetia which brought Georgia into the spotlight of global media attention, the situation in this country in the Caucasus, in regards to both its relations with Russia and its own internal affairs, remains complex and tense.

Georgian President Mikheil Saakashvili came to power a bit less than five years ago promising to return Abkhazia and South Ossetia to Tblisi control and to stabilize democracy in the country. These territories are now under strict Russian control and there is little that Saakashvili can do to take back these areas before the end of his term. The second promise, however, remains feasible and the Georgian President can still do a lot to ensure effective democratic reform in the country.