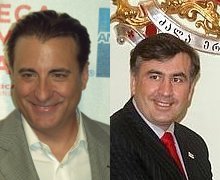 Film director Renny Harlin started filming his new movie on last August's conflict, in Georgia. Besides the army and aviation, Andy Garcia and Val Kilmer will also take part in the filming

The Hollywood film about the August, 2008 Georgia-Russia conflict is currently being filmed on location in Georgia. The director, Renny Harlin, has been at the helm of such world-famous films as Die Hard 2 and Cliffhanger (starring Sylvester Stallone), although Harlin's most interesting film, from an artistic perspective, is probably The Cleaner, a crime thriller starring Samuel L. Jackson. Harlin's newest film about the Georgia-Russia conflict also showcases some very famous Hollywood stars.

It looks like the film will be a mix between Hollywood blockbuster and true story drama. In Georgia, very few people actually know what the film's storyline is, but, according to rumours leaked from various sources, the basic premise is the story of a journalist, also experiencing a personal crisis, who travels to Georgia in the summer of 2008 before the beginning of the conflict in Ossetia. Travelling to Georgia to write a story about wild plants, he arrives in Tbilisi, studies the country, and is attending a traditional Georgian wedding party when the the war begins.
The fact that the film features two superstars like Andy Garcia and Val Kilmer basically guarantees success at the box office.

Andy Garcia, playing the role of Georgian President Mikheil Saakashvili, filmed his scenes in four days. The scenes were filmed as realistically as possible with some being shot on location in the president's office and in the square outside the parliament where, on 12 August, 2008, the real Saakashvili gave a speech during a demonstration for national unity.

Val Kilmer, playing the role of the Dutch journalist killed during the bombing of Gori, is in Tblisi too. At the time of the actual event, the images of the Dutch reporter's dead body were published around the world. According to rumours, Val Kilmer was eager to play the role, even if it is a supporting role.

Although it is difficult to estimate the exact cost at this time, the film has a budget of 40 million dollars, part of which will be financed by the country of Georgia. The Georgian government will cover the expenses of the scenes shot in Georgia and active-duty Georgian soldiers, including some who took part in the battle in August, will take part in the filming. The tanks, helicopters, air-planes, and troops are all authentic, and all of the scenes re-enact last year's events.

Without a doubt, these elements make the film spectacularly engaging and, because many of the actual characters play themselves, it has the feel of a documentary filmed one and a half years ago.

Nonetheless, public opinion about the film in Georgia is divided and opinions vary dramatically according to political views.

Georgian authorities have done everything in their power to support production of the film. Rumour has it that government representatives, ready to offer a good deal, went to Hollywood to convince the directors and producers to make the film in Georgia. Given the high level of international attention the war got last year, it was inevitable that somebody would accept the offer. That somebody was Renny Harlin.

Georgian authorities see the film as an event of national importance. For the government, it is important to raise not only journalists' and political experts' awareness of events in Georgia, but also the awareness of average cinema-goers - in other words, potential tourists.

The film offers Georgia the long-awaited opportunity to clearly distinguish itself from the state of Georgia in the USA and to become known to a wider audience. Because the film will feature more of the country than just last year's war, film audiences will get a unique glimpse of Georgia. For example, the film's main character takes part in a traditional Georgian wedding and one scene features Val Kilmer in a restaurant in the historic part of the city.

For this reason, the Georgian authorities have treated the shooting of the film as a matter of utmost importance.

The political opposition has a radically different opinion and finds any excuse to criticise the government, even in regard to the shooting of this film which, at first sight, seems to be a purely positive event.

Criticism focuses mainly on the financial aspect of the operation. The leaders of the opposition maintain that, in a time of crisis, it is immoral to spend money on a propaganda film.

The Republican leader Levan Berdzenishvili apparently stated that seeing the president promoting himself is "disgusting, especially considering that this is all taking place against the background of a wrecked economy." The political opposition hasn't welcomed the film because they see it as an attempt to improve Saakashvili's image.

One of the moral leaders of the opposition, the television presenter Georgi Gachechiladze, has declared: "I've always liked Andy Garcia and I am quite disappointed that he accepted the role of Saakashvili, the president that started the war and who is not even considered legitimate by Georgians."

The fact that Saakashvili-Garcia only appears a couple of times in the film hasn't been taken into account: these are the rules of political games in Georgia.

As a result, political opposition supporters see the film as a waste of money made only to support Saakashvili's personal interests. They perceive it as absolutely negative.

Obviously, Moscow is not happy with the fact that a film like this is being produced and perceives it as anti-Russian. In the State Duma, some have proposed banning the film. Production of the film won't be finished before May, but one can bet on the fact that it will somehow be banned from Russian cinemas.

After all, Russia lost the competition for rights to this film from the outset. The Russian government's attempt to hire the Serbian director Emir Kusturica to produced a film based on the Russian account of the events failed: Kusturica actually came to Tskhinvali, de facto capital of South Ossetia, to express his solidarity with the Ossetian population, even though he could not accept shooting the film because he is busy with other projects for the next four years.

In Russia, the film Olympus Inferno (watch the trailer) was produced, but it didn't have much success in Russia or -and this is really strange- in South Ossetia. After all, Russia's talent for producing action flicks is certainly not as acclaimed as America's. In that realm, it will be very hard for Moscow to compete with Renny Harlin's film.

If one focuses on the utter complexity of the Georgia-Russia War, country politics, political opposition, the country's government, and the Ossetian and Russian populations, it is easy to loose sight of one crucial detail: Hollywood directors produce films that will sell.

Harlin himself has, on more than one occasion, denied that the project has any political stance. "The film will not be anti-Russian, anti-American, or anything similar. It is a film against war. It will tell the stories of ordinary people against the background of the war."

Regardless of the political details, one must remember that Hollywood isn't the Pentagon or the State Department and an American director wouldn't start a project based on politics.

The film will probably be interesting. All the ingredients seem to be in place: a controversial and contemporary theme, scenes shot in a documentary style, a professional director, and a cast with two Hollywood superstars.

And that is exactly what matters for Hollywood.