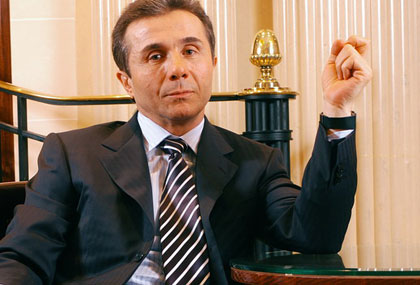 Those interested in Georgia's politics have not been talking about anything else. Bidzina Ivanishvili, the richest man in Georgia (185th in the world), had been leading a private life until recently. But in early October he announced his entry into politics, challenging the government and opposition

On October 5th, the press office of Georgian billionaire Bidzina Ivanishvili announced the tycoon's plans to create an opposition party. Even though he has not yet had time to establish the party, the entrepreneur has become a central figure in the country's public life.

That this development has resonated so deeply in Georgia is related to several factors, but primarily to the extreme marginalisation of the opposition in Georgia where opposition parties, instead of gathering discontented voters and building a political alternative, get mired in endless internal conflicts. As the recent parliamentary elections in Telavi showed with striking clarity, the ruling party has no rivals: the United National Movement received 85 percent of the votes in that election. This is a warning for the entire country: if things do not change, this scenario will probably be repeated at the national level in 2012.

Ivanishvili enjoys enormous popularity and personal credibility with the public, gained over his many years of charitable giving done quietly without attracting much attention. He has led a life so private that, until recently, almost no one in Georgia even knew what he looked like. He has the ideal ingredients for entering politics: $5 billion dollars of personal wealth, a reputation as a patron, and many supporters who are convinced that, with his management experience, he will be able to revive Georgia's economy.

Forbes magazine lists Bidzina (Boris) Ivanishvili (also known as Boris Ivanishvili) at position 185 among the world's richest men, with an estimated wealth of $5.5 billion. Ivanishvili mostly accumulated his wealth through highly profitable purchases and sales during the post-Soviet privatisation in Russia. His main investments are tied to the banking and metallurgy industries. After the Rose Revolution (2003-2004), Ivanishvili left Russia and returned to Chorvila, his native village in Georgia. Ivanishvili has recently attracted international attention as an art collector of Impressionist works. His most valuable painting is "Dora Maar au Chat" by Pablo Picasso, purchased for $95 million dollars at Sotheby's in 2007.

The billionaire's move has shaken the anti-government oriented sections of society. As in the 2007-2008 elections, Georgian public opinion is divided: government supporters claim that Ivanishvili is on the Kremlin's payroll, and in fierce clashes with his supporters on social networking sites, they praise the government's attempts to make Ivanishvili's life difficult. In contrast, Ivanishvili's supporters refer to his charity work, consider him a sincere patriot, and hope he will replace the current government.

Ivanishvili has not had the most successful start to his political career. The two letters were released in the press in which he sharply criticized the media as well as what he termed the “pseudo-opposition", which he accused of hidden complicity with the government. In a later interview, the billionaire tried to make amends, at least with the media, acknowledging that he was "too harsh" to them, but his evaluation of the "pseudo-opposition" remained unchanged.

At this time, Ivanishvili is actively negotiating an alliance with the most pro-Western parties: Republicans and liberal Democrats. This indicates that despite his Russian heritage, he does not appear to be a "project of the Kremlin". Furthermore, he continues to gather around him representatives of the art world and non-governmental organisations.

In the near future, however, his activities will be complicated by his triple Russian, Georgian, and French passports, which cost him his Georgian citizenship. Since Ivanishvili did not apply for dual citizenship (generally prohibited by Georgian legislation), his valid passport is the one he obtained last, i.e. the French one. Until he has received citizenship – a process that can take many months – the entrepreneur has no right to found a party in Georgia or finance existing political initiatives. It is not yet known how he intends to remedy this, however, Ivanishvili is actively preparing to create a party that will take part in the parliamentary elections scheduled for autumn 2012 and run for a majority position.

It is clear that the Georgian government is determined to prevent the new party by any relatively legitimate and legal means, not only to win elections, but also to gain votes. It is indeed crucial for the government to obtain a majority sufficient to amend the constitution in the 2012 elections. But the situation is further complicated by the attention Ivanishvili has already garnered in diplomatic circles. U.S. Ambassador John Bass said that "the United States will be closely following the situation with Bidzina Ivanishvili". The government will thus need to be more careful in its choice of weapons or risk losing the support of Western allies.

In reality, Ivanishvili hardly poses a mortal danger to the government. Half of the Georgian parliament is currently elected with a proportional system and the other half with a single-shift majority system. Even supposing the future movement succeeds in securing 50 percent in the proportional segment, for the government it would be a fatal defeat only at first glance. One should not forget that the ruling party's immense resources guarantee its victory in 80 to 85 percent of majority-system districts.

This is not due to massive fraud, but to the simple fact that opposition parties often present five or six candidates rather than joining forces against the government coalition. Consequently, even if the ruling party gets fewer votes than the opposition, e.g. 45 percent versus 55 percent, the seat will still be won by the ruling party, as the opposition's 55 percent is split between five or six candidates.

This is an important and perfectly legitimate and legal advantage. It will thus be virtually impossible for Ivanishvili's party to replace the current government unless the Georgian opposition completely changes its ways. The way things are, however, Ivanishvili still might create a political alternative, get 40-45 percent of the seats in parliament, and give a jolt to the Georgian political scene.