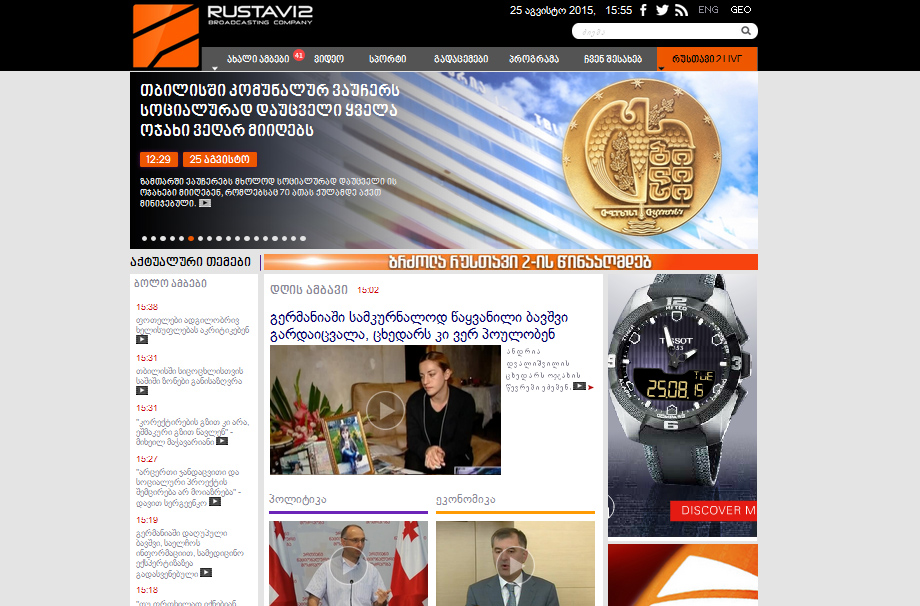 The homepage of Tv Rustavi 2

Legitimate claim or political plot? A former co-owner of one of the country's most popular TV channels has claimed the intellectual property of the TV logo. The judiciary intervenes with a number of temporary restrictions and Rustavi 2 risks to disappear

A lawsuit against TV channel Rustavi 2 threatens to deal a serious blow to freedom of expression in the country. Officially started as an ownership issue, this might turn – according to a widespread opinion in Tbilisi – into a move by the government to silence a critical voice, especially in view of the 2016 parliamentary elections and the crisis of consensus plaguing the government of the "Georgian Dream" led by Prime Minister Gharibashvili.

Rustavi 2 – a broadcaster of fundamental importance for the national political debate – is now facing bankruptcy and closure. Despite the significant steps forward made in terms of freedom of the press, confirmed by the main international indicators, its demise would be a considerable loss for the pluralism of information in the country.

Everything started with a restrictive measure issued by the Municipal Court of Tbilisi on August 5th, following a lawsuit filed three days before by entrepreneur Kibar Khalvashi, former co-owner of Rustavi 2. Awaiting the trial and a final verdict, those temporary limitations could however last months, or years. In short, limitations include the prohibition for shareholders and owners to sell their shares; to sell or rent the technology, goods, and premises of the TV station; and to loan from banks or private subjects. As stressed by the current owners, the measure jeopardises the company's financial stability, with the risk of bankruptcy should these restrictions persist. Other requests by Khalvashi were instead rejected, including the freezing of the company's bank accounts and the ban on the use of the logo by the current ownership.

Rustavi 2 has its own version of the events. Interviewed by OBC, head of communications and external relations Nina Nakashidze said: "What at first glance, may be regarded as a private legal dispute, is in reality the most radical campaign against independence of the most top-rated broadcasting company in Georgia. It should be noted that the seizure of the property of the Rustavi 2 Broadcasting Company was  preceded by systematic and consistent campaign against Rustavi 2 in the last 2 years. The ultimate goal was to change the company`s editorial policy and its influence as a leading media outlet in the country through intimidation. We believe that entire case is a politically managed process the main aim of which is to hush down independent TV company prior to upcoming 2016 parliamentary elections".

The former co-owner claims intellectual property of the logo and some programmes, for which he requires 500,000 dollars in damages. Khalvashi also claims back the shares he purchased in 2004 and sold in two tranches between 2005 and 2006 – a transfer he claims he was forced to perform by direct pressure of then president Mikheil Saakashvili, who would later use the channel as a propaganda tool for his government.

The government adopted a cautious, seemingly detached position, as expressed in the words of Prime Minister Irakli Garibashvili: "As a citizen and prime minister, I am always in favour of justice. This is a dispute between two actors and the court will decide. The government's involvement in this case is zero".

Yet, the court's decision has caused concern even outside Georgia. Dunja Mijatović, OSCE Representative for Freedom of the Media, described it as "disproportionate and excessive", pointing out that it "may constitute a threat to pluralism in Georgia". The European Federation of Journalists, together with the affiliated Independent Association of Georgian Journalists, appealed to the authorities of Tbilisi to allow Rustavi 2 to operate freely. Critical voices have been raised also by NGOs, representatives of civil society, and local and international institutions, as a testimony to the importance of Rustavi 2 in the political debate in Georgia.

The history of Rustavi 2

Rustavi 2 has a controversial history, with as many as 20 changes of ownership in just over 20 years. Founded in 1994 as a local station in the town of Rustavi, it quickly gained national influence as a free, critical voice at the time of Eduard Shevardnadze. Over the years, there have been several attempts to close it, which the TV station managed to avert, also thanks to popular support, e.g. in October 2001, when hundreds demonstrated outside parliament. The history of Rustavi 2 is also clouded by shadows and mysteries, the most famous being the murder, again in 2001, of TV host and investigative journalist Giorgi Sanaia, a face familiar to everyone in Tbilisi. As reported by the journalist's family for years, the murder was never properly investigated.

According to the World Press Freedom Index 2015 by Reporters Without Borders, Georgia holds the 69th place out of 180 countries – a fair result, if considering for example how our country, Italy, is only 73rd. The other countries of the Southern Caucasus are lagging behind, with Armenia in 78th place and Azerbaijan at the bottom, at 162nd place. Georgia also scores a fair assessment by Freedom House, which in its report Freedom of the Press 2015 rates the country as "partly free", like Italy for example, and unlike all the bordering states. The document also highlights how Georgia stood out in the period 2010-2014 as one of the nations with the greatest improvements in the field of press freedom and first in rank in Eurasia.

However, as the case of Rustavi 2 shows, unresolved issues remain – notably a close link between politics and information, with continuous attempts by the former to subordinate the latter to its own interests. The turbid aspects of this complex relationship are likely to endanger the many steps forward made by the freedom of press and information in Georgia.