Europe’s internet speeds are faster than ever, but not for everyone

Personal-data privacy: New EU rules are ‘a giant step, given the current situation’ 23/04/2018 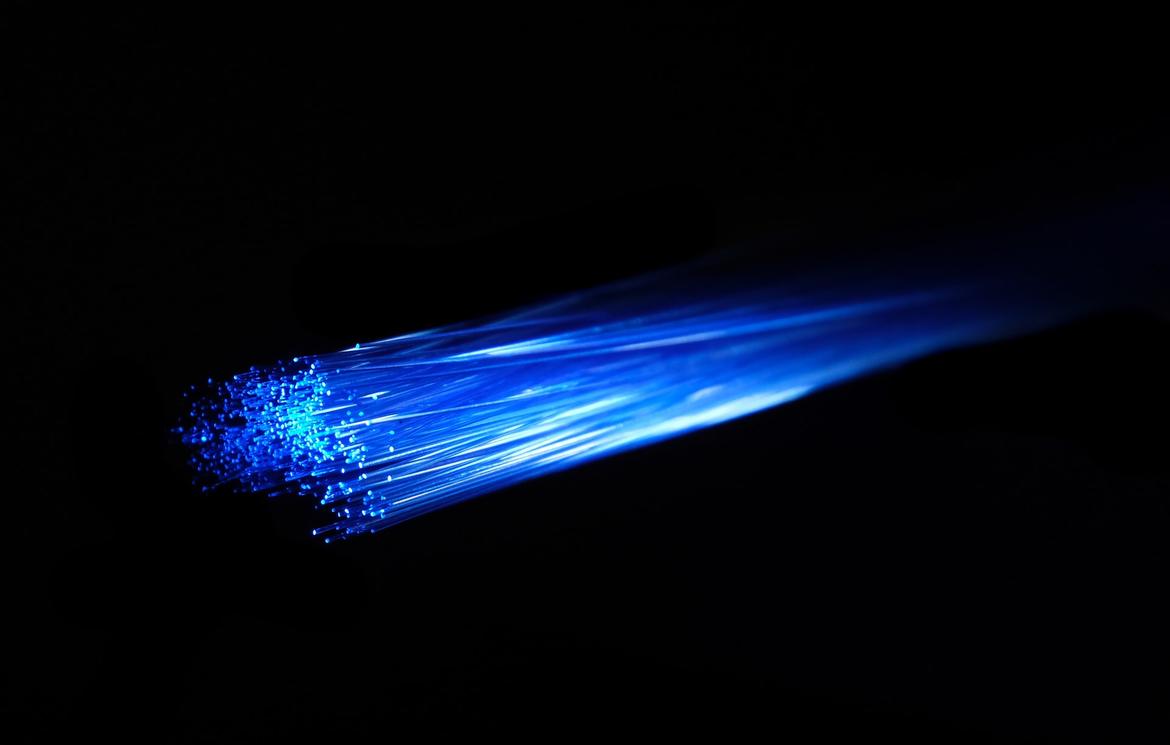 Over the last year and a half internet speeds in Europe have increased by more than fifty percent. Unfortunately, the gap between urban and more rural areas, and between north European countries and those in the south-east, has also grown

Internet performance in Europe has improved dramatically over the past year and a half. Average fixed line download speeds have increased by more than half (+51.9 percent), from 68 Megabits per second (Mbps) in March 2020 to 103.3 Mbps in June 2021. Over the same period, upload speeds increased by 44 percent, from 32 to 46.2 Mbps.

At the beginning of 2020, when the Speedtest.net data used for this study became available, three EU countries were below 30 Mbps in download speed, the minimum threshold set by the European Commission's European Broadband Plan. These were Croatia, Greece and Cyprus (in addition to non-EU countries North Macedonia and Albania). By the end of the same year, Croatia and Cyprus had surpassed the threshold, albeit by a small margin (33.6 and 36.8 Mbps respectively), leaving Greece at the bottom of the table.

According to a Eurobarometer survey published at the beginning of the year, 9 out of 10 Europeans have not changed their internet subscription type during 2020, despite the fact that restrictive measures linked to the pandemic have led many people to work and study from home, where they may have to share the same connection with other family members. It is therefore likely that the increase in speeds is due to a general improvement in the services offered to users under unchanged economic conditions.

Within the EU, however, there are significant differences between member countries. While in 2020 the gap between the EU countries with the highest download speed (Denmark) and the slowest (Cyprus) was 83.4 Mbps, now this gap, between Denmark again and Greece, has widened to 132.2 Mbps, an increase of more than half (+58.5 percent).

In the first quarter of 2020, only five countries surpassed 100 Mbps download speeds, with three non-EU countries leading the way: Iceland, Switzerland and Norway. These were followed by Denmark and Sweden. By mid-2021, 20 European countries had surpassed that threshold. The top ten included several EU member states: France, Romania, Spain, Luxembourg and Hungary. The top EU country remains Denmark, increasing from 109 to 168 Mbps.

As for the level of improvement, the countries that have seen the largest increase in percentage terms over the past year and a half are Cyprus (+87.4%), France (+76%), Italy (+74.8%) and Albania (+73.2%). Despite a significant improvement, Cyprus and Albania remain well below the European average. On the other hand, Italy and (most of all) France have significantly improved their profiles.

As the map shows, the regions which formed part of the German Democratic Republic, except Berlin, have lower internet speeds than the rest of the country.

Another country where internal differences loom large is Italy, where the data indicates stark differences between medium-large urban centers and rural areas. This is clearly seen below in the distribution of the average connection speed across Italian municipalities: the two peaks indicate a greater frequency of cities near the reference value of 30 Mbps, with one peak slightly below the threshold and the other above. 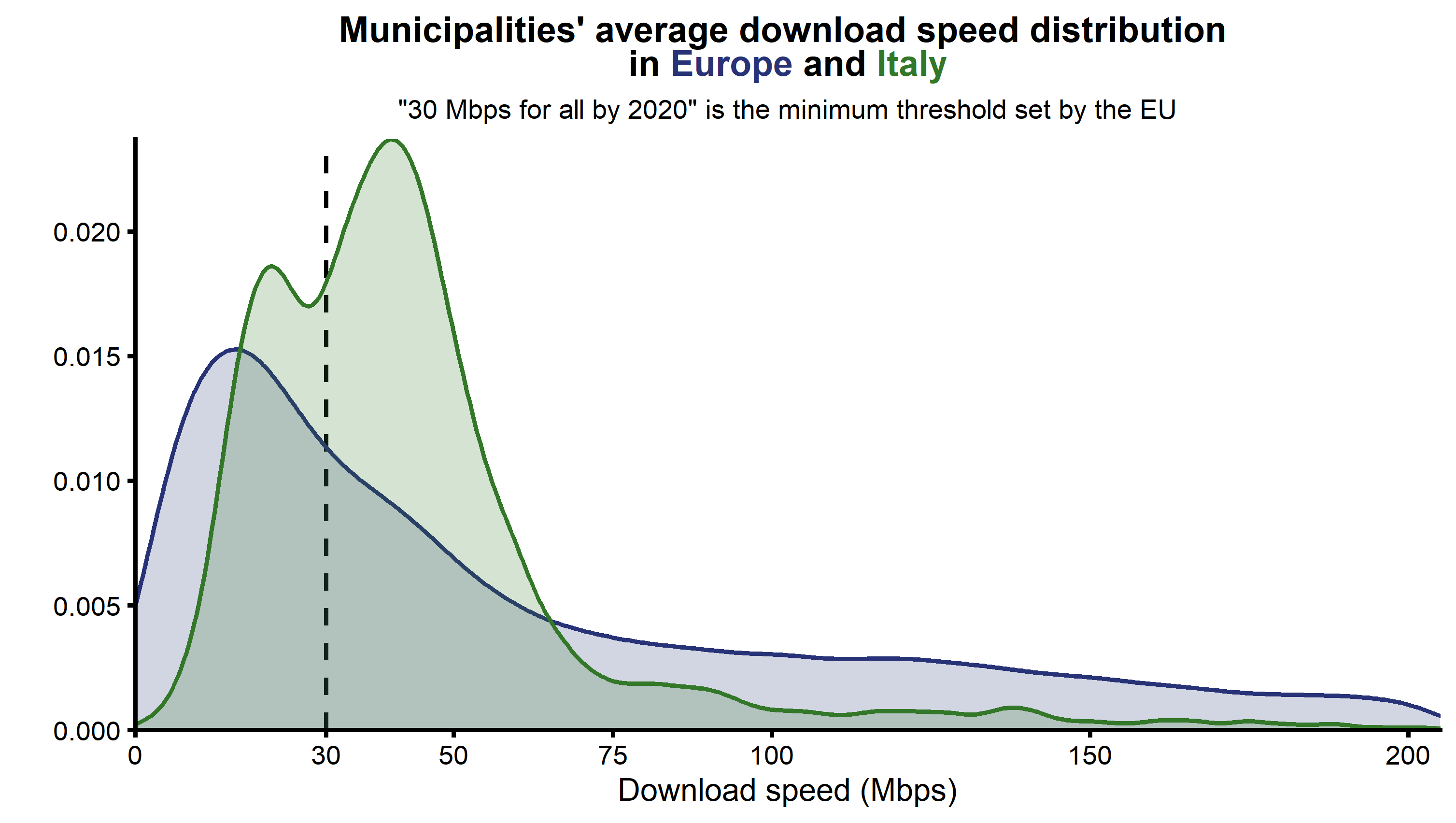 The distribution of data on the map allows us to better see these two groups of municipalities.

Data for the other countries can be explored via our dashboard.

These figures are especially relevant in light of the European Union's fixed connectivity goals. According to the Broadband Europe plan, access to a network of at least 100 Mbps (among other things) is expected in all European homes by 2025. The Commission's next goal, laid out in its Digital Compass, is a secure, high-performance, sustainable digital infrastructure, and, among other objectives, connections of at least one gigabit per second (Gbps) for all by 2030.

The European Commission reiterated the centrality of "hyperconnectivity" in its recent Strategic Foresight Report, identifying it as one of four key factors that will have a major impact on the EU in the future. The term refers to the ever-increasing number of interconnected devices that, when performance allows, enable the development of new services, jobs, business models and forms of human interaction.