The Decade of Mesić 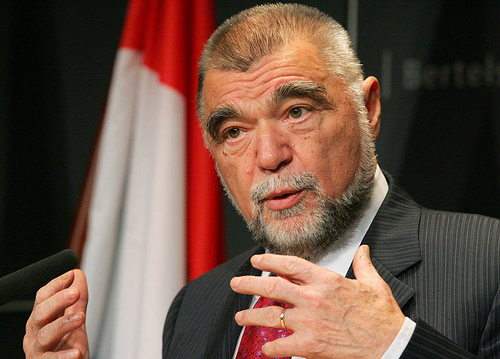 With the official swearing-in of new Croatian president Ivo Josipović on 18 February, the 10-year era of Stjepan Mesić came to an end. Our correspondent looked back on the Mesić era, a time that saw the strengthening of democratic institutions

Stjepan Mesić (75 years old) was the president of Croatia for 10 years. Today, he likes to joke about the fact that he will be “the former president-for-life”. In the Balkans, this hardly ever happens: the highest-ranking state officials usually leave office either due to old age (like Tito, former president-for-life of Yugoslavia, and Mesić’s predecessor, Franjo Tuđman), or after revolutions (like former Serbian President Slobodan Milošević, or ousted Romanian ruler Nicolae Ceauşescu). When the third Croatian president, Ivo Josipović, took his oath of office on 18 February, Mesić transferred his powers according to the procedure practised in most advanced democracies. For the first time since Croatia gained its independence in 1991, Croatians had the chance to see how this ceremony takes place.

In order to make an assessment of the Mesić decade, it is absolutely necessary to take six main features of his two five-year terms into account. The first feature is Mesić's governing style, distinctly different from that of his predecessor, authoritarian Franjo Tuđman. Unlike Tuđman, Mesić promoted the idea of “a citizen president”, that is, a president equal to all of the country’s other citizens, not an Apostle in office to fulfil “God’s mission” for the sake of his disciples.

Secondly, Mesić worked hard to drag Croatia out of the international isolation into which the country was plunged by Franjo Tuđman's failing policies toward Bosnia and Herzegovina, not only during the war, but also after the conflict had ended. Mesić also improved Croatia’s relations with The Hague International Criminal Court.

The fourth element characterizing Mesić’s presidency was his role as the Chief of the Armed Forces1. Mesić decided to force 12 officials, who started to get too involved in politics and had attempted a coup, into retirement. Long before Croatia entered NATO, Mesić greatly contributed to the de-politicisation of the army.

The fifth distinctive feature of Mesić’s presidency was his firm opposition to those members of the Church attempting to get directly involved in politics. This approach led to frequent conflicts with some sectors of the Catholic Church.

The sixth element of Mesić’s mandate was his effort to take all war criminals to court, including Croatian soldiers. He has always emphasized the need to personalize the blame for these atrocious crimes in order to lift the burden of guilt from the nation as a whole.

One of the most famous Croatian intellectuals, professor Žarko Puhovski, added: “One of the positive features of his presidency was that President Mesić accepted a reduction in the president’s powers, which were still too great when he was elected. This hardly ever happens in politics: once a candidate holding certain powers is elected, he usually tries to maintain and increase them. Stipe Mesić kept his pre-electoral promises and accepted a reduction in his powers. Both from the moral and constitutional point of view, this is one of the most fundamental features of his first term in office.”

According to opinion polls, Mesić was the most popular Croatian politician for ten years. Apart from some slight fluctuations, his popularity rating held firmly at 72 percent; an amazing rate.

However, Mesić's critics point to his tendency to judge everyone and everything, too often inconsistently. Mesić always wanted to be humorous, even when there was no place for his sense of humour. This often provoked criticism from the media. Sometimes, his inclination to seek pragmatic political compromise led him to accept situations that diverged from his declared stances.

These are not the only reasons history will remember Mesić. His life is as interesting as a movie. His father was a member of Tito’s party. His mother died when he was only a year and a half old and he can't remember her face. Mesić was an average student and he earned his law degree in 1961. He was soon elected mayor of a little town in his native Orahovica and, four years later, became a member of Croatia’s parliament when Croatia was still part of Yugoslavia. He was the first MP to be elected by citizens and not by the Communist party. In 1971, during the “Croatian Spring”, he was accused of favouring the breaking-up of Yugoslavia and was imprisoned for one year.

Mesić was still active in 1989, the beginning of the multi-party era in Croatia. He joined Franjo Tuđman’s Croatian Democratic Community (HDZ) and won the first multi-party elections in 1990. He became the first Croatian Prime Minister and, in the autumn of that year, when the shadow of armed conflict was already looming over the former Yugoslavia, he went to Belgrade to serve as a member of the Yugoslavian Presidency. This institution was the country's collective governing body, comprising representatives of the eight republics and autonomous regions that made up the former Yugoslavia. The following year, he was elected Chairman of the Presidency, but the war had already begun.

Mesić will be remembered as the last president of Yugoslavia, a country destined to break up due to huge differences among its people, the suffocating antagonism that exploded after Tito’s death, and Slobodan Milošević’s attempt to impose Serbian domination on the region.

In 1991, Mesić went back to Zagreb. He survived an attempted assassination when the Yugoslav army bombed Tuđman’s office in the centre of the Croatian capital, Mesić's place of residence at the time. The following year, he was elected President of the Croatian Parliament, but he soon clashed with Tuđman, who expressed ambitions toward annexing part of neighbouring Bosnia and Herzegovina into Croatia.

After this, he soon fell into political disgrace. He left HDZ and funded his own party, but without electoral success. He later joined the Croatian People’s Party (HNS) and, in December 1999, after Tuđman’s death, he ran for president. In the beginning, he was an outsider - pre-election opinion polls assigned only five percent of the votes to Mesić - but he triumphantly won the elections and, on 18 February 2000, he officially became the second President of Croatia.

Mesić was the Croatian president who collected the most “trophies” and, for this reason at least, he will go down in history. He served the three highest political posts in Croatia, something that had never happened before in Croatia and, even at the international level, is quite rare. He was Croatia’s Prime Minister, the President of the Parliament, and the President of Republic for two terms. He was also the last President of Yugoslavia.