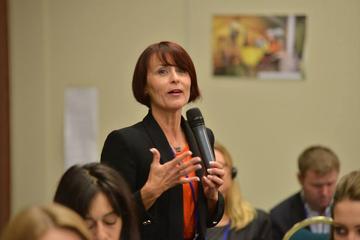 Croatian journalist Zrinka Vrabec Mojzeš spoke at the Skopje Media Forum about the dangerous relations among politics, media and media owners in the region, and advocated the need for a European-level legislation on media. Interview

On the sidelines of the South East Europe Media Forum (SEEMF) in Skopje , OBC spoke to Zrinka Vrabec Mojzeš, who joined Croatian President Ivo Josipovic's team as adviser for social affairs in 2010, after having worked as a reporter, editor and anchor for her country's Radio 101 for 26 years. She says that she hasn't left the media completely, not only because this is one of the sectors included in her current portfolio, but because journalism, according to her, is like poison. Once you've been poisoned, it's for a lifetime, she says.

The question of this year's SEEMF is whether journalists get insufficient information or they get too much information from the government, from the political power. How would you answer that question?

I think that information became a subject of bargaining. What the practice in Croatia has shown is that, actually, there is a trade between politicians and media owners, and they're bargaining with information. I'm very pessimistic about the state of journalism in Croatia and about the standards of the profession. And what I feel - probably it happened in all other transitional countries - is that media were much more important, much more professional, much more responsible in the 90's and at the beginning of the new millennium, when media were changing the political and social processes in our countries, contributing to the democratization of our societies. Now, when we are members of the European Union, media became just business and a question of profit for their owners. What I can say about Croatia is that there are two or three names who have been controlling the media scene for the last two decades, and they trade with the centers of power, either political parties, or mafia bosses, or big corporations, whose owners advertise in those media and I don't think that journalists have the integrity, or any integrity, or at least they don't have the integrity that we had 15 or 20 years ago.

You raised the issue of media owners' responsibility in comments at this conference. Is media ownership transparent in Croatia?

Is the problem rooted in the legislation or in the fact that there are ways for bypassing the law?

Yes, there are ways for bypassing it. Officially, we know who the owners are. Croatia was at war. The problem is that the privatization of everything, including media, started during wartime. The president of Croatia, Ivo Josipovic, managed as an MP at the time to integrate the criminal privatization into the constitution of Croatia to be attributed as a war crime, because it didn't happen just to media, it happened to everything else. Those who became owners at that period in the 90's are still owners of the media. Even if they officially sold shares to somebody else, I know that they are actually controlling the media scene.

So, there is a person who has been prosecuted for different crimes in privatization, we know that he lives in the neighboring country, Bosnia and Herzegovina, but as much as I know, he's still controlling 90% of the private commercial media scene. On the other hand, in the field of print media two big corporations, Styria and WAZ, they are controlling 93% of print media in Croatia. What I think is that this sort of what we call corporational journalism, and this is not journalism, this serving of the interests of the owners will kill the profession.

What is the way out?

Well, it is a very difficult question. First of all, there is no unique European media law.

So, do you support the idea of a common European-level legislation?

Yes, absolutely. Because Europe is controlling media concentration just on the [common] European market. I think that this should apply to member states as well. They don't care if a certain owner has a monopoly in a particular country. They care if he has a monopoly on the European media market. So, I think that there should be a unique piece of legislation at the European level. It shouldn't be left to the national governments, because they have their own interests and they don't care.

On the other hand, solidarity among journalists was mentioned here. It does not exist. If you're working for two different owners, your colleague is actually your biggest enemy. The reason why I mentioned licensed journalists [during the conference] is because there are no professionals working for the main print media anymore. There are a few of them, of course; they are mostly columnists. But they [owners] don't need professionals. They hire students, they hire people who are not educated and then they abuse them to publish whatever they need in their own interest. If only licensed journalists could and should become members of a journalists' professional association, when a journalist publishes a lie, when he publishes something that's not true and is not in the public interest, then his journalists' association could punish him in a way that he cannot publish anymore. Now, there's absolutely no result of this media council. What do they do? Well, they say, 'yes, it was wrong'. And?

Do you think forums like this one can contribute to at least some change?

It's important because it keeps, not just introduces, but also maintains professional connections among journalists within the region. And this is so important. This is why I am so grateful to see among us Dr. [Erhard] Busek, because they started in the early 90ies, when most of our professional relations were lost. It's also important to know that we are sharing the same problems. So, wherever you look at, journalists are more or less in the same situation. And, of course, when certain recommendations come from such a big group of people, I think that they can influence the government. There was a minister from the Macedonian government yesterday. It was important that he heard the things that he heard.