Media freedom in Croatia: the problem is not the laws, but their application 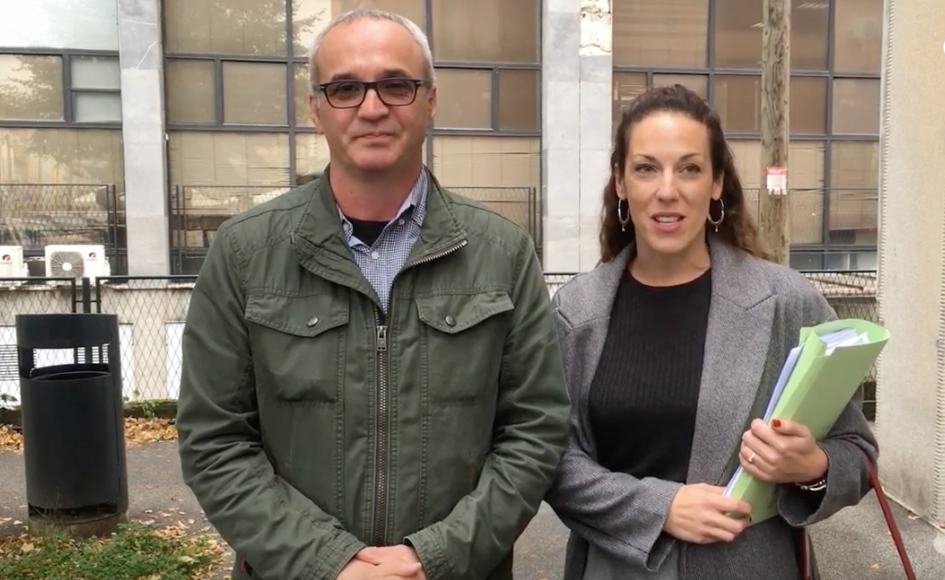 Vanja Juric in 2019 together with one of her clients, Hrvoje Zovko, whose story we have reported about several times

951 trials against journalists, claims for damages for 10.3 million Euros. Numbers that show how the media world in Croatia is under pressure. We talked about it with Vanja Juric, a lawyer specialising in freedom of expression

According to the latest report  by the Association of Croatian Journalists (HND/ CJA), at least 951 trials are ongoing in Croatia against journalists and the media. In the vast majority of cases, these are libel proceedings, and in total the damages claimed from reporters and newspapers amount to approximately 10.3 million Euros. Vanja Juric is a Croatian lawyer specialising in freedom of expression and media law. Since 2008, she has defended publishers, journalists, civil society organisations, or activists in many of these trials. We asked her to explain us what is happening in Croatia.

Why are there so many trials against journalists and the media in Croatia?

I think the main reason is that we are a very young democracy and therefore we have not developed an awareness of the importance of media freedom and what freedom of expression really means in a democratic society. People think it is completely normal, usual, and even desirable to sue the media. The figure collected annually by the Association of Journalists of Croatia (HND), which speaks of about a thousand trials in progress against the media and journalists (a figure which is incomplete, as some newsrooms do not respond), is very high compared to the number of inhabitants and compared to what happens in other EU countries.

Is it just a social problem or does Croatian law not protect journalists enough?

I do not think the main problem lies in our laws. Our laws are very solid and all the lawsuits are based on the violation of the rights of the personality. In Croatia, honour, reputation, and dignity are constitutional rights. Everyone should have the right to protect their honour, reputation and dignity. I would not limit the possibility of also suing the media and journalists if there is a basis for doing so. Surely the laws can be improved and we continue to insist on certain things, such as deleting crimes against honour, reputation, and dignity from the criminal code. However, the legal framework already provides a good basis for ensuring that all these proceedings are concluded in a fair and correct manner. What seems problematic to me is the application of the laws. This still happens too often in trials, although fortunately the errors of the courts of first instance are often corrected in the higher instances. But until the higher authorities decide on the matter – which can take 3, 5, or 7 years, because sometimes you have to wait for the Constitutional Court and so on – the trial creates serious pressure, both for journalists and for the media, in terms of cost, time, and existential concerns.

How often does a libel trial end with the acquittal of the journalist or the media?

I can talk about the cases I deal with, and I would say that we win 90% or 95% of the time, even if maybe not right away in the first instance. Of course, there are cases where the wrong piece of information has actually been published, whereby the mistake has been made, and in that case the situation is different. Our success rate is very good, but as I said before, this still comes with big costs for the newsrooms. A very specific situation then arises with the non-profit media, which simply do not have the financial means for this kind of legal action. For them, any sentence, even those requiring the payment of 10,000 or 20,000 kuna (1,300–2,600 Euros), poses a threat to their existence.

Are there any tools available to the non-profit media to cover these legal costs?

In 2015, the HND together with a couple of us lawyers founded the "Center for the Protection of Freedom of Expression" (Centar za zastitu slobode izrazavanja) which involves lawyers who provide free legal assistance in this type of situation. It is an important tool for anyone facing this kind of problem. Then there are also some international organisations, which – since we started talking about SLAPPs in Europe – have made funds available to journalists and the media to defend themselves in trials in which there are serious cases of SLAPP. In those cases, international organisations help finance the costs. International organisations dealing with media freedom and freedom of expression are to be commended for all they have done so far, because I think it was solely their work and the work of specialised groups in the member states that brought this issue on the agenda.

How much can a trial cost?

On average, the penalty decided by the Croatian courts, when they determine that there has been a violation of personal rights, is between 20,000 and 40,000 kuna (2,600–5,200 Euros), but the exact amount varies depending on the judge, how many hearings there have been, and so on. Furthermore, these expenses increase by 10,000-15,000 kuna (1,300-2,000 Euros) if we also count the legal interests etc. However, the situation can also be very different, for example as in the case of the recent trials against Telegram and Hanza media (I do not defend them), in which the injured party asked for more than 1 million kuna in the first case and 900,000 kuna in the second [or over 120,000 Euros, ed.]. As the costs of the proceedings depend on the value of the object of the dispute, a court appearance can cost 5,000, 7,000, even 10,000 kuna in these cases. The demands are so high because the plaintiffs know that the higher the demand, the higher the costs of the proceedings, and therefore the greater the pressure on the media. Even if they know they will not win that sum, they have the right to estimate the damage they think they have suffered. There are mechanisms that the defendant can use to question the value of the dispute, but it is the court that ultimately decides on the value.

Who usually sues the media and journalists?

People who have financial, political, or other power. Most of the time they are politicians or officials or some powerful businessmen, or corporations. The main point is that on the one hand there is power (financial, political, or otherwise) and on the other hand there are the media, journalists, activists, whistleblowers, etc. In Croatia these are more often politicians, not necessarily in office, and entrepreneurs. In Virovitica, for example, we now have the case of Goran Gazdek, one of the vice presidents of the HND who manages the virovitica.net portal. This is one of those cases in which I cannot fathom how the plaintiff managed to win, but the fact is that the virovitica.net portal is obliged to pay about 10,000 kuna to a politician and current member of parliament [Romana Nikolic, ed.], because the site reported that 10 years ago this person was convicted of threatening another person. This is a fact and no one disputes that, however, the plaintiff – and therefore the court – held that the rehabilitation period was over and that journalists no longer have the right to publish the information. There is a similar sentence against the 24Sata newspaper. Furthermore, the same person also sued the publisher of the Faktograf portal and against the publisher of the Libela portal. There is a whole series of proceedings of this type initiated by the same person, as several outlets reported on it during the campaign for the parliamentary elections and soon after, when the plaintiff became an MP. Talking about it is really in the public interest, in my opinion it is very clear. But now this person has already won several cases and it is a big problem. The courts in this case really show a lack of understanding. I am working on two cases involving this plaintiff and I expect to win, but when I see such decisions then I tell myself that you cannot be sure how it will turn out.

You have been doing this job for 14 years now. What has changed in Croatia during this period?

As bad as the situation looks, I think Croatia has gone in the right direction in these 14 years (although unfortunately this process takes a long time). For example, plaintiffs' claims are generally lower than in the past. And in this sense, the decision of the European Court of Human Rights (ECHR) in the "Narodni List vs Croatia" case was very important for Croatia, where the European Court ruled that the 50,000 kuna (6,600 Euros) that the plaintiff was asking and had gotten were too much. The ECHR compared them to the amount that is judged in Croatia for damages for the death of a close relative. This was very clever of the court. This amount is around 75,000 kuna (10,000 Euros) and the court said that the demand in this type of proceeding cannot be equal to 2/3 of the compensation paid in much more serious situations. After this ECHR ruling, it seems to me that the plaintiffs have started to file lower claims and the courts to grant lower amounts, so there is a good trend.

We are also making progress on crimes against honour and reputation. We had a bad moment in 2011–2012 when a provision on serious humiliation was introduced into the Criminal Code that was problematic for a variety of reasons. But this provision was later removed. The crime of defamation, even though it still exists in the criminal code, is worded in such a way that it is quite difficult to prove. Slander still exists, but the exclusion of unlawfulness has been restored when the crime is committed in the exercise of journalistic work and some other things. All these changes in criminal law, even if these crimes still exist, show that the direction that is being pursued is that of decriminalisation and that the legislator wants to encourage the resolution of these issues in civil proceedings and not in criminal ones. While there are still many pending criminal proceedings, the success rate of plaintiffs is significantly lower than that of civil litigation.

What else should be done?

It may sound cliché, but I think the right way to combat these things is to systematically educate all participants in these proceedings. I am thinking of the lawyers on both sides and above all of the judges who decide in these trials. You can have ideal legislation, but if people are not educated on how to apply it correctly, you will always have the same problem. I said at the beginning that we have satisfactory laws, so there is a legislative framework under which these cases can be judged solidly and fairly. The problem is the application. This is because we have no lawyers or judges specialising in these matters. Courts are overloaded with work, and media and media law are a specific type of law in which one must be constantly updated, follow the case law of the European court, understand very well not only the legal rules and principles, but also how journalism works, how journalists work, how newsrooms work, what equipment and mechanisms they use. It is indeed a demanding branch of law. We are training systematically and intensively. It is not an easy fix, nor something we will achieve in a day or two, but I think we should start as soon as possible and that is the only way to get the results we want.