Istria: being young in the 70's 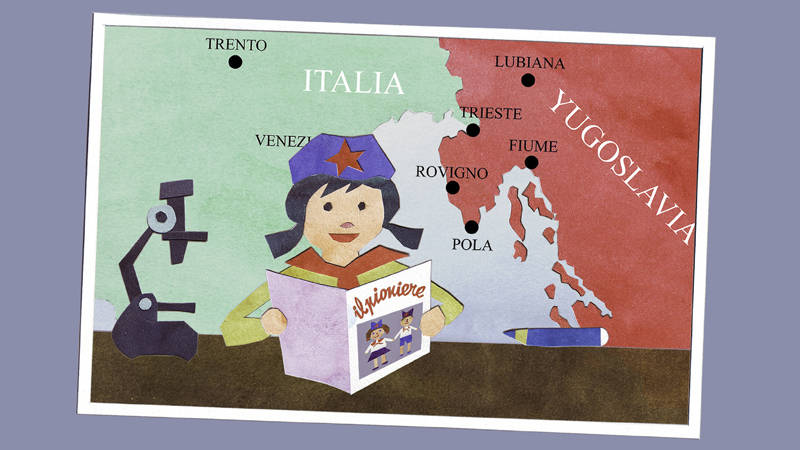 A documentary portrays the life of the Italian community in Istria through the eyes of children and teenagers. An interview with its director, Sabrina Benussi

The documentary portrays the life of the Italian community in Istria from the 70s until the death of Tito, in 1980, through the eyes and the experience of teenagers, children and grandchildren of the so-called "remainers". Why this perspective?

My documentary was born from the desire to narrate a page of a border history which is complex and poorly known, although the region is geographically close to Italy, but light-years away in the historical-political sphere.

I wanted to highlight the interaction between the socialist youth training project, implemented through education and the mass media of the regime, and the memory of those involved. I did so by focusing on the generation born in the Sixties, the children and grandchildren of the "remainers", or else, the Italians who at the end of World War II, due to complex social and political reasons, did not choose the road to exile.

Much has been said and written about both those who decided to leave and the “remainers” themselves. But the generation depicted in the documentary, or my generation, has never been analysed, especially in view of comparing the media and personal memory.

These are people who lived the 70s as children and teenagers, students taking compulsory education, whose ideological initiation went through the training as Pioneers and the Socialist Youth until the eventual affiliation in the League of Communists. At the same time, they were the first television generation, spectators of both Tele Capodistria and the italian radiotelevision (Rai), exposed to the mass culture which was diffused through radio and personal contacts, very often displaying the society and culture of neighboring Italy. They incorporated the border, which is porous and mobile, without too much embarrassment and without feeling schizophrenic.

Exclusively for the readers of OBC: the opportunity to see, till the end of July, the whole documentary "I See Red. The 70s, between History and Memory, by Istrian Italians" in streaming

And it is the border in the broadest sense which is portrayed here, borders in which one can recognise all those who, in various European areas, were marked by mobility.

We often find ourselves, as Osservatorio, delivering lessons on the dissolution of Yugoslavia to girls and boys from secondary and high schools. How would you define, in one sentence, the Socialist Yugoslavia in which you also grew up?

The process of European integration has brought a lot of expectations to the area of ​​Trieste, Gorizia, Istria after the scars from the 20th century. To what extent have them been maintained?

I looked forward to Croatia’s entry in the EU, and when it happened I was very happy. So far as the European Union remains only an economic union, however, nothing much can be done... Not to mention the new walls …

In the documentary, a sense of annoyance and then real impatience towards the mechanisms imposed by the socialist state comes along clearly, although expressed in a subtle way. With what attitude do you look back at your childhood and adolescence, now that Tito's Yugoslavia does not exist anymore?

Another world is possible ... but the "new" creates even more disappointments ... as Moni Ovadia said in his presentation in Trieste, they threw the baby out with the bathwater.

In the documentary, it is often the grandmothers who put everything into place, who put the concerns of those who grew up in those years into perspective...

Yes, at least my grandmother tried to provide answers to my concerns, and used to bring a bit of balance between the "inside" and "outside" ....

Many of the materials used in the documentary are archival. How did your research take place?

The research took a long time, the TV Capodistria archives are a treasure to be discovered. Then I searched for memories at the corner of my mind, between the boxes of my memory and those in the attic, text books, diary, notebooks, in various libraries and finally the respondents gently provided a lot of material ....

Can you tell us what has happened to the movie after it was produced and made available to the public? Its reception, participations in festivals …

Three years later and after obtaining prizes, I am very convinced of my work. I have had many confirmations in all the screenings. There have been many, in Venice, Pordenone, Trieste, in Umbria.

In Istria, on the other hand, I presented the documentary in Rovinj, and then only in Porec. I suggested doing it in Pula and Rijeka, but I have had no reply for a long time now. I do not know the reason, or rather, perhaps I do not want to cause fruitless controversy: I just wanted to understand. At the end of the documentary there is a Polish saying which is very telling in this regard: "Over here, only the future is certain, the past always changes ".

It is a narrative that uses irony as a key ingredient, and above all, it is not yelled. The protagonists, I repeat, are children and teenagers who saw only the ornaments of ideology (skirts, dresses etc...) Reality was very complex, but the story I tell is that of everyday people in a tough decade for the Italian minority - but, being not older than 15 years old, they could only have partial awareness of the issues. As I say in the documentary, they were annoyed, very annoyed. Their questions, however, remained unanswered.