Art and testimonies of the Yugoslav wars 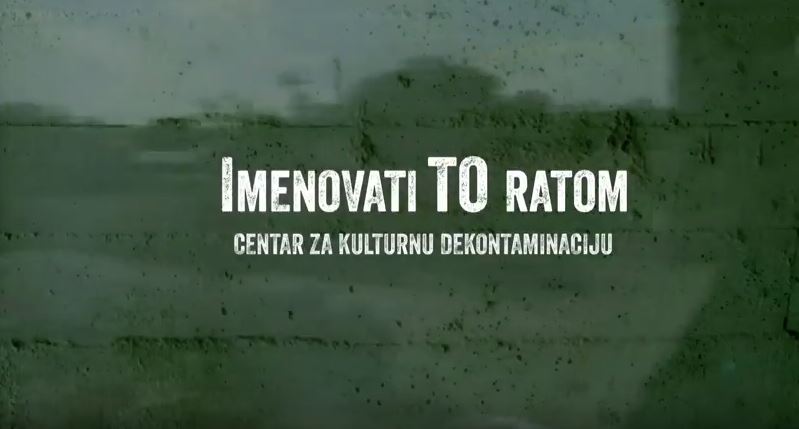 From next autumn, in several European countries, an art exhibition will seek to address the relationship between the value and problematics of testimony as an instrument to understand the past

Reflecting on the role of testimony in understanding the Yugoslav dissolution wars of the Nineties – this is the objective of the project "Testimony: Truth or Politics". The main activities scheduled for 2017 include the organization of an art exhibition that will be hosted, starting from the autumn, in the countries involved in the project: Italy, Austria, Belgium, and Serbia. Preparatory work has begun at the end of last year with the operational meeting between the partners and the artists who will take part in the exhibition.

Art projects, specially selected through a call for artists, make use of hundreds of interviews collected by partners in projects that have been carried out over the last few years – first, “Imenovati to ratom” (To call it war), promoted by Belgrade's Centre for Cultural Decontamination , which recorded the testimonies of pacifists and Serbian war veterans in order to bring attention to a conflict deliberately marginalized in the country's public debate. The other important collection is the one built by Osservatorio Balcani Caucaso, "We were looking for peace". The voices of dozens of Italian citizens involved in solidarity initiatives are useful to delve into the importance of the wars of the Nineties for Italy and Europe. Collected as historical sources in specific research projects, these testimonies find new outlets thanks to the creativity of the artists, in a dialogue between history, art, and testimony that aims to bring back the attention to the Yugoslav dissolution wars.

Projects in the making

In these months, artists are working on the installations that will make up the final exhibition. Most projects are based on a critical approach to testimonies, with a focus on the relationship between the value and the problematics of testimony as a tool for understanding the past, which leads many artists to processes of deconstruction and reworking.

Andrea Palašti and Sanja Anđelković (Novi Sad), for example, start from a single testimony to build a radio drama in three acts, each based on the manipulation of the narrative in three different styles. The deconstruction and reconstruction of the experience focus on the direct testimony of the conflict, but also on daily life and the unsaid. We find extensive deconstruction also in the work by Katerina Šević (Berlin) who, through the organisation of a "group listening" of testimonies, selects some specific themes (fear, shame, injustice), with the excerpts chosen becoming the source of the artist's reconstruction performance. Lala Raščić (Sarajevo) relies instead on quantitative language analysis to extrapolate the most frequent words in the interviews and use them in her reinterpretation, while the installation by Jacek Smolicki and Tim Shaw (Malmö) will ask visitors to learn and repeat the testimonies, with the aim of emphasising the manipulation of memory, included and interpreted according to experience and circumstances.

Vladimir Miladinović (Belgrade) referes to the problems encountered during the "juridical translation" of the testimonies used by the International Criminal Tribunal for the former Yugoslavia (ICTY) and addresses the relationship between historical truth and the representation of the past. His work focuses on the interpretation and potential misunderstanding of testimonies through the replication of translation processes from the original language. Similar problems are at the centre of the work by Ryo Ikeshiro and Aron Rossman-Kiss (Geneva-London), starting from the alleged incomprehensibility of the Yugoslav wars for external observers. The variety of voices and "truths" is translated and rewritten through automated technologies in order to highlight the problematicness of transmission.

The installation by Ana Bunjak (Belgrade) immerses the visitor in the contrasts produced by media and politics in the public sphere of the region. Her installation intends to subject the visitor to a dialogue/confrontation between several testimonies, replicated in a "fugue" played in stereo by two guns-loudspeakers.

Nikola Radić Lucati (Belgrade) employs a different methodology, by re-elaborating interviews to Serbian veterans and placing them in their historical context working on other sources. The testimonies are revitalized through a radio programme that will take visitors back to the Nineties, in an attempt to confront the stories of the witnesses with a wider and fuller reconstruction of the past. Jelena Marković's (Belgrade) work also uses witness accounts to focus on the involvement of Serbian citizens in the conflicts of the Nineties. Her installation draws on the first phone calls home from soldiers at the front, rebuilt through the testimonies and analyzed both in their content and for the unsaid.

Other artists involved in the project have engaged in gathering new testimonies aimed at highlighting peculiar aspects of the conflict. The stories are considered useful tools to question the dominant official narratives of the past and to give voice to alternative viewpoints.

Through both performance and audio installations, Kristina Marić (Osijek) focuses on the conflict and its legacy along the Serbian-Croatian Danube border. Her artistic analysis takes into account the relationship between the two banks of the river and the media manipulation that accompanied the conflict. In addition to the Serbian testimonies part of the project, the artist will also include interviews with Croatian veterans in order to create an unprecedented combination of voices.

Lana Čmajčanin and Adela Jušić (Sarajevo) bring attention to the daily dimension of the conflict, reproducing the experience of living in the basements of Sarajevo during the siege – spaces that turned from warehouses to shelters and living spaces. The exhibition will also feature often marginalised female voices. Doronre Paris (Dublin) recovered the testimonies of Bosnian, Serbian, and Croatian women to highlight their viewpoints on the conflict, including women fighters and women in camps. The perspective of civilian victims is at the centre of the work by Mersid Ramicevic (Hamburg), who proposes artistic-musical research on the common traits of such experience, identified through work with new testimonies. Filip Jovanovski and Ivana Vaseva (Skopje) focus in particular on the experiences of Macedonian citizens, investigating their relationship with the past and with nationalism, expressed also by the country's new monuments.

The European dimension of the conflict emerges in the work by Iula Marzulli and Marianna Fumai (Bari), who recover the memory of refugees that left war zones to reach other European countries. Their installation will bring together the personal stories of some artists who left their countries and of others who stayed.

Daniel Nicolae Djamo (Bucharest) takes a different direction by using the "testimonies" of a hypothetical new Yugoslav war set in 2028. Following the vicissitudes of a group of Serbian refugees in Munich, in a political framework characterised by the dissolution of the European Union (2024), Djamo's installation explores the issues of migration, integration, and related politics.

Works are in full swing, coordinated by the Belgrade Centre for Cultural Decontamination and Zoran Erić, curator of Belgrade's Museum of Contemporary Art. The exhibition will be hosted by this prestigious institution of the Serbian capital and in the countries of partner organizations. However, the promoters of the project are also working to establish new collaborations in order to bring this multifaceted reflection on the experiences of the Yugoslav wars to other European countries.