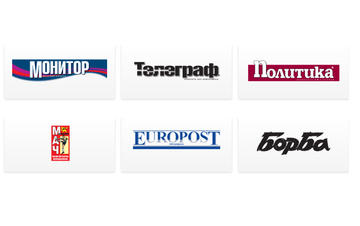 The framework agreement on the sale of Sofia-based newspapers Telegraph, Monitor, Politika and Meridian Match, as well as 50% of NBMG's shares in the company that publishes Veliko Tarnovo-based daily Borba was signed the same day.

According to a summary of the buyer's status on Irish Solocheck register, MML was set up in Dublin on April 9th, i.e., two days before the deal with the Bulgarian holding. "The company's current directors John Raymond Phelan and Patrick Halpenny have been the director of 33 other Irish companies between them; eight of which are now closed," the summary also said.

"The finalisation of the transaction would mark New Bulgarian Media Group Holding and Irena Krasteva's exit from the Bulgarian media market, on which the press group has worked for more than seven years," the paper quoted the holding's announcement as saying.

NBMG also noted that the deal is subject to approval by the Balkan country's Competition Protection Commission, which usually needs up to three months to come up with a decision.

"All public facts concerning the transaction raise suspicions that it is fictitious," Mediapool commented, adding that in a similar move in late November 2012, British consulting company Alegro Capital acquired for an undisclosed fee two Bulgarian TV broadcasters, owned by Crown Media JSC at the time. The two broadcasters were jointly operating television channels TV7, Super7 and Balkan Bulgarian Television (BBT), which was shortly afterwards replaced by News7. At the time of the deal, Krasteva was part of the management of Crown Media.

On April 15th 2014, i.e., nearly 16 months after the November 2012 deal, Crown Media was still quoted as the sole owner of the three TV channels on CEM's public register.

Mediapool's report recalled that BBT was "the recipient of a 60-million-lev [ca. 30 million euro] credit" from Sofia-based Corporate Commercial Bank, whose CEO, Tzvetan Vassilev, "is considered the true owner of the television channel".

Krasteva, a former head of Bulgaria's state lottery with close links to the country's current ruling coalition, is the mother of Delyan Peevski, one of the most controversial politicians in the Balkan nation. His appointment as head of the country's State Agency for National Security (DANS) in mid-June last year sparked mass anti-government protests. Although the move was cancelled a few of days later, the public rallies went on for months, turning violent on several occasions.

A lawmaker from the mainly ethnic Turkish Movement for Rights and Freedoms (MRF), Peevski, 33, is widely expected to be nominated by the party as a candidate for MEP in the upcoming European Parliament elections to be held in Bulgaria on May 25th. Several MRF regional structures have already proposed his candidacy.

That upcoming nomination is most likely the main motive behind the deal announced on April 11th, Mediapool commented.

Although his mother is the one who officially owns the cited media outlets, and not Peevski, he admitted in a recent interview that he was the one effectively managing them as they were family ownership and referring to them as "my media".

"Yet, they are not listed in any of his conflict of interest declarations, although Peevski has himself stated that, under his instructions, they run various political errands, such as ensuring that coverage went easy on crime bosses," Mediapool noted.

The concentration of media ownership in just a few hands in Bulgaria has been repeatedly criticised by the EU and media watchdogs.