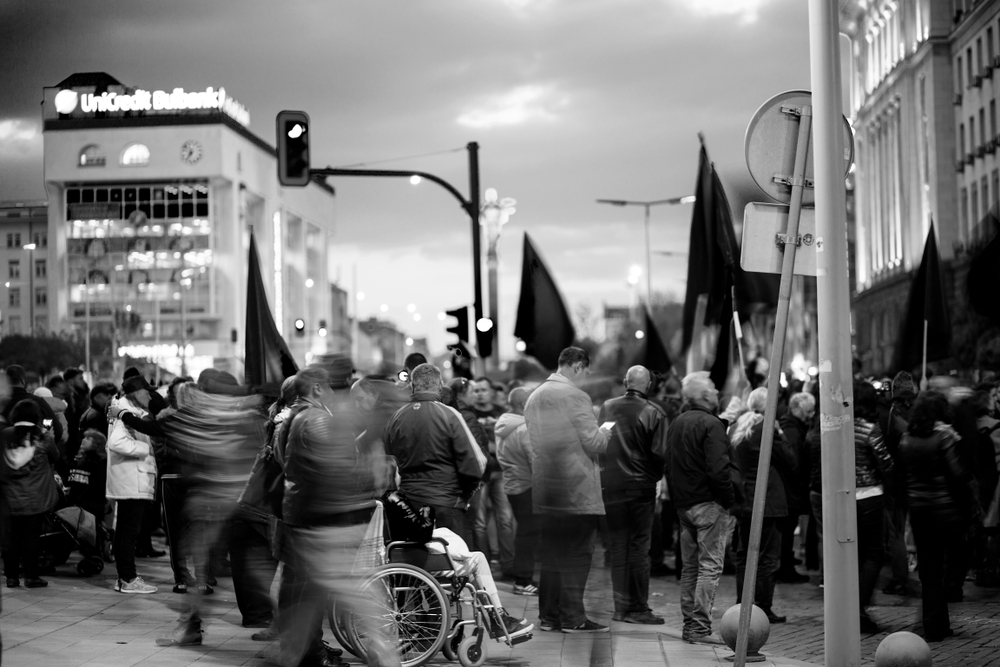 Despite European funding and new measures undertaken by the Sofia authorities, Bulgaria lags behind in safeguarding the rights of people with disabilities who continue to experience high levels of poverty and social marginalization

Almost six years have passed since Bulgarian's disabled associations took to the streets of Sofia, demanding an aid system modernisation. The successful idea of setting an 85-day camp in front of the national Parliament in 2019 almost brought down the Bulgarian government, achieving the resignation of ultranationalist leader and then vice Prime minister Valery Simeonov.

The protest also undermined the strength of the political coalition in power, as the extreme nationalist parties of the United Patriots coalition (Обединени Патриоти in Bulgarian) openly expressed their contempt for the demonstration. Eventually, two proposals came out: the first Bulgarian general disability law and a new order focused on providing support and social services to the disabled population. Shortly afterwards, the Bulgarian government closed the last internment centre out of twenty-four inherited from the Socialist era system.

Despite the announcement of the measures, in 2019 Eurostat reported how 50.7% of the disabled population over sixteen in Bulgaria was at risk of extreme poverty and social exclusion. The percentage put the country at the bottom of the EU, preceded by Latvia (42.1%) and Estonia (40%). The overall average among the 27 Member states was 28.4%. Furthermore, in the same year the same institution identified Bulgaria as the second EU member with the highest percentage of disabled population lacking state social services and assistance and a disability pension. Only Greece, with 75.6% of its residents falling into this category, overcame Bulgaria’s 65.7%.

Several international and national organisations have highlighted numerous violations of disabled people’s rights perpetrated by the Bulgarian government in the last years. For example, Disability Rights International's report published in 2019 included recommendations addressed to the Bulgarian Presidency. The statement significantly stresses the necessity of stopping the construction of the so-called group homes, a sort of socio-educative premises financed by European funds, serving as internment centres for disabled people in the country. According to the organisation, those centres contribute to stigmatising disabled people and fostering prejudice on their inability to be self-sufficient.

"Placement in group homes is dehumanizing, socially isolating and does not contribute to the development of skills that contribute to further inclusion in society", reports the document, which also emphasises disabled people’s need to spend most of their time with their relatives to stimulate them. Already in 2015, national NGO Lumos shed some light on this critical situation, reporting that only 28% of young people inside those centres enjoys some independence.

Aware of the lack of means affecting many families in Bulgaria, Disability Rights International's report includes the proposal to employ European funds to consolidate the current Bulgarian Social care system. At the same time, the UN's Committee on the Rights of Persons with Disabilities stated that "no States parties may build new institutions, nor renovate old institutions, beyond the most urgent measures necessary to safeguard residents' physical safety".

The recent announcement of the Strategy for the Rights of Persons with Disabilities 2021 – 2030 by Helena Dalli, Commissioner for Equality, in March 2021, is the main instrument on which the European Union relies for assuring the same rights for disabled European citizens in every Member State. The new approach sets out actions around these main principles: EU rights - every disabled person in the continent must hold the rights of other European citizens and be an active political actor; independent living and autonomy - persons with disabilities can choose their way of living with self-determination; no-discrimination and equal opportunities - setting norms aimed at protecting people from any type of discrimination and violence based on their disabilities.

On 7 October 2021, the European Parliament adopted a resolution on the protection of persons with disabilities. With 579 votes in favour (92 abstentions and 12 against), the MEPs call on the Commission to structurally integrate the new European Disability Strategy into the European Semester so as to ensure its effective implementation at national level, promoting the inclusion of people with disabilities in society, their employment and strengthening social protection measures. The report underlying the resolution, coordinated by Maltese MEP Agius Saliba, member of the Progressive Alliance of Socialists and Democrats group, was drafted with the participation of members of the EP Disability Intergroup and taking into account petitions relating to the rights of people with disabilities sent by citizens to the EP Petitions Committee.

The report highlights the plight of people with disabilities in Bulgaria and warns that the country has not yet implemented an independent monitoring mechanism to promote, protect and observe the implementation of the Convention on the Rights of Persons with Disabilities (CRPD). The CRPD is the legally binding international instrument adopted on 13 December 2006 to reaffirm that all persons with all types of disabilities must fully enjoy human rights and fundamental freedoms. This is the first human rights convention signed by the EU. For the purposes of implementing the measures envisaged by the CRPD, a monitoring framework is envisaged both at European and national level to promote, protect and enforce the rights established in the Convention.

Commissioner Dalli recently said she was satisfied with the success of the European Disability Card already implemented in a group of eight Member States. The measure aims to ensure equal access to cross-border benefits for people with disabilities, mainly in the fields of culture, leisure, sport and transport. The new European Strategy can be considered one of the most innovative initiatives implemented so far by the EU in this field; however, it is undeniable that there is still a long way to go to achieve the goal of non-discrimination and full inclusion in society of people with disabilities in the EU.

Even though the 27 European States have already ratified the new European plan, during last October's presentation by Dalli's Commission, some criticised the Bulgarian government's actual measures to accomplish with all the scheduled goals, another sign of the country's delays in the protection of the rights of people with disabilities.

How to deal with this situation must concern all European citizens. As long as these communities' rights will be trampled over, nobody will ever be in a position to declare Europe as the land of democracy and justice.