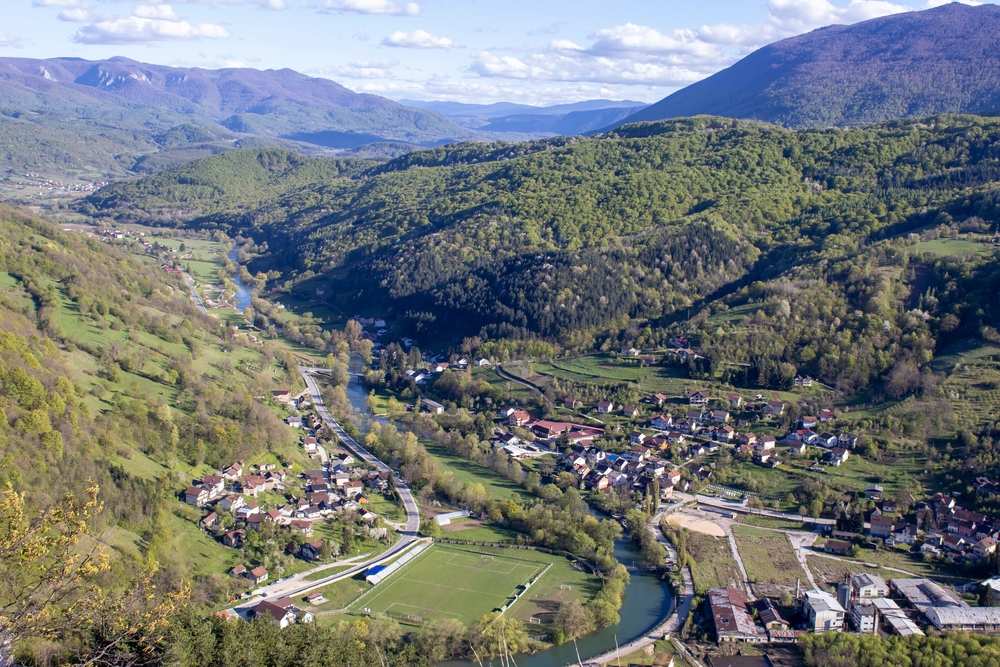 The Sana River near Kljuc, Bosnia and Herzegovina - © Emma7/Shutterstock

The Croatian Regional Energy Agency (REGEA) has been working for several years along the cross-border area between Croatia and Bosnia and Herzegovina, with the dual objective of decarbonising the region and creating a competitive local market. “Environmental issues know no border”, says REGEA's Tamara Lisnjic Lang

The use of an innovative ecological heating model that uses wood biomass of forest origin as an alternative resource to traditional fossil energy: this is the goal of the two pilot projects, "Renew Heat" and "Wood Key", funded respectively with 698,000 and 1,114,000 Euros by the EU within the INTERREG programme. Forest owners, farmers, and entrepreneurs in rural areas of the Bosnian canton of Una-Sana, the Croatian region of Karlovac, and the Montenegrin municipality of Herceg Novi were involved.

The goal is to expand this energy transition model to the entire cross-border area, in order to develop a competitive regional market that uses local resources and, at the same time, contributes to the decarbonisation of the region.

We asked Tamara Lisnjic Lang – project manager of the "Wood Key" project by REGEA, the leading body of the initiative – to tell us about the results and potential of the two projects.

Croatia and Bosnia and Herzegovina are forest-rich countries, whose populations traditionally rely on wood for heating and cooking. This, however, largely contributes to increasing air pollution, especially during the cold season. How can the "Renew Heat" and "Wood Key" projects address and solve this problem?

The primary objective is to change the widespread opinion that the use of wood as a fuel is negative for the environment, demonstrating through pilot projects that the oldest known renewable fuel does not only reduce carbon dioxide emissions, but it can also help develop the local economy if used sustainably.

Encouraging a regional energy transition based on the sustainable use of wood biomass directly promotes not only environmental protection and the strengthening of the local and regional economy, but also energy security in the cross-border area. Considering the still inefficient and traditional use of wood at home – decidedly unsustainable, expensive, and unacceptable from an environmental point of view – both projects aim to change the concepts that revolve around the daily use of wood biomass through a series of promotional and educational activities.

In addition to the environmental issue, the two initiatives aim to develop a competitive regional market that uses the resources present in the area. How?

One of the main objectives of both projects was the promotion of entrepreneurship in the district heating sector, i.e. the implementation of a heat sales contract model, through which private investors have the possibility to reconstruct the boiler room of a public building and take it into management, preserving the public ownership of the property.

In the "Renew Heat" project, the first step after the refurbishment was to hand over the rebuilt boiler rooms to the management of the service providers. For this purpose, a public tender was announced for the selection of a manager, with whom a two-year contract was signed. In these two years, the manager has entirely administered the boiler room and has taken care of the related services, including any interventions, the procurement of wood biomass, and the sale of thermal energy to a public body.

A contract heat sales model was also used in the "Wood Key" project, but with some innovations in terms of approach and complexity. The competitiveness of the regional market itself has been stimulated through the possibility of concluding a multi-year contract for the supply of thermal energy from biomass between the customer – for example, public institutions – and the service provider, a private investor.

The "Renew Heat" project ended in 2018. What were the main results achieved?

Three biomass boilers with a total capacity of 0.875 MW were installed (and are currently in use), respectively in the Duga Resa high school (Croatia), in the cultural centre, and in the sports centre of Cazin (Bosnia Herzegovina). Therefore, 3 heat supply contracts were signed (one in Croatia, two in Bosnia and Herzegovina) and a strategy was launched to increase the use of biomass for energy purposes. These are results that continue to be useful not only for end users, but also as a basis for developing and planning new projects.

The "Wood Key" project is the natural continuation of the previous one, and will end in the next months. What is the final balance of this second experience? Will we see other similar REGEA-led projects in the future?

We have expanded active partnerships, adding Montenegro to the cross-border collaboration between Croatia and Bosnia and Herzegovina. 3 boiler rooms were then built belonging to three different public bodies located in the three different countries involved, with a total capacity of 1.8 MW, for a total investment of 4.9 million kuna. In addition to the investment itself, a number of activities have been implemented or are at a very advanced stage of realisation, ranging from contracts for the sale of thermal energy to the transfer of knowledge through training courses, from the education of children to raising public awareness of renewable energy sources and energy efficiency.

Calorimeters were installed in 5 boiler rooms of Croatian schools, fuelled with fuel oil, with the aim of collecting accurate data on thermal energy consumption. 10 investment studies were carried out in all three countries involved, which will form the basis for future biomass boiler construction/ reconstruction projects. These programmes are linked to the investment platform developed on the project site, which also serves to stay informed about the status of the various projects, to calculate the cost-benefit ratio of switching to renewable energy, and to analyse existing studies. The project has also developed a strategy to encourage the use of renewable energy sources in the cross-border area. All these results form a solid basis for future projects already in preparation.

Both projects are co-financed by the EU within the INTERREG programme, which aims to favour a balanced development of the various European regions, without borders being an obstacle. How important is cross-border cooperation for REGEA?

They are an excellent example of how harmonious development of European regions can be encouraged, precisely because it is aimed in particular at countries neighbouring the EU, with which any connection and cooperation is of vital economic and political importance. Given that these are less developed economies that try to align themselves with European standards, and given that environmental issues know no borders, it is necessary that through this type of cooperation their development is encouraged and these collaborations consolidated.

An important part of the project was the transfer of knowledge from REGEA to other actors in Bosnia. How did it happen?

The transfer of knowledge turned out to be quite simple, thanks to the fact that both projects boasted excellent collaborations with all partners, and that these same partners are intensely involved in working with the local community and the business world. Entrepreneurs themselves often work towards the transfer of European knowledge and standards on the quality of work to their sector.

To what extent has the project managed to involve the world of entrepreneurship, agriculture, and small owners of woodland plots? Will the virtuous circle thus created be able to sustain itself autonomously after the end of the project?

The projects achieved an excellent level of cooperation with the local business community in all three countries, and some collaborations involved both projects. Solid and clear foundations have been established for cooperation to continue, first of all through the transfer of knowledge and experience, and secondly through training and implementation of the projects themselves.

How can wood biomass of forest origin contribute to the de-carbonisation of the region? In addition to the gain in environmental terms, is there also a saving in economic terms for local communities?

All relevant European statistics show that a significant share of heat and electricity is produced from biomass – this is the case now and it will be in the near future. In addition to the significant contribution in terms of energy balance, the production of energy from biomass has many other repercussions, for example in terms of employment (creation and maintenance of jobs), increasing local and regional economic activity, generating additional income in agriculture, forestry and the wood industry through the sale of biomass fuel.

Using biomass energy, instead of shelling out huge amounts of money for the purchase of fossil fuels, means keeping resources within the local community (investment-earnings-taxation cycle). The impact on employment and the socio-economic aspects mentioned are the greatest advantage of using biomass compared to fossil fuels, but also compared to other renewable energy sources.