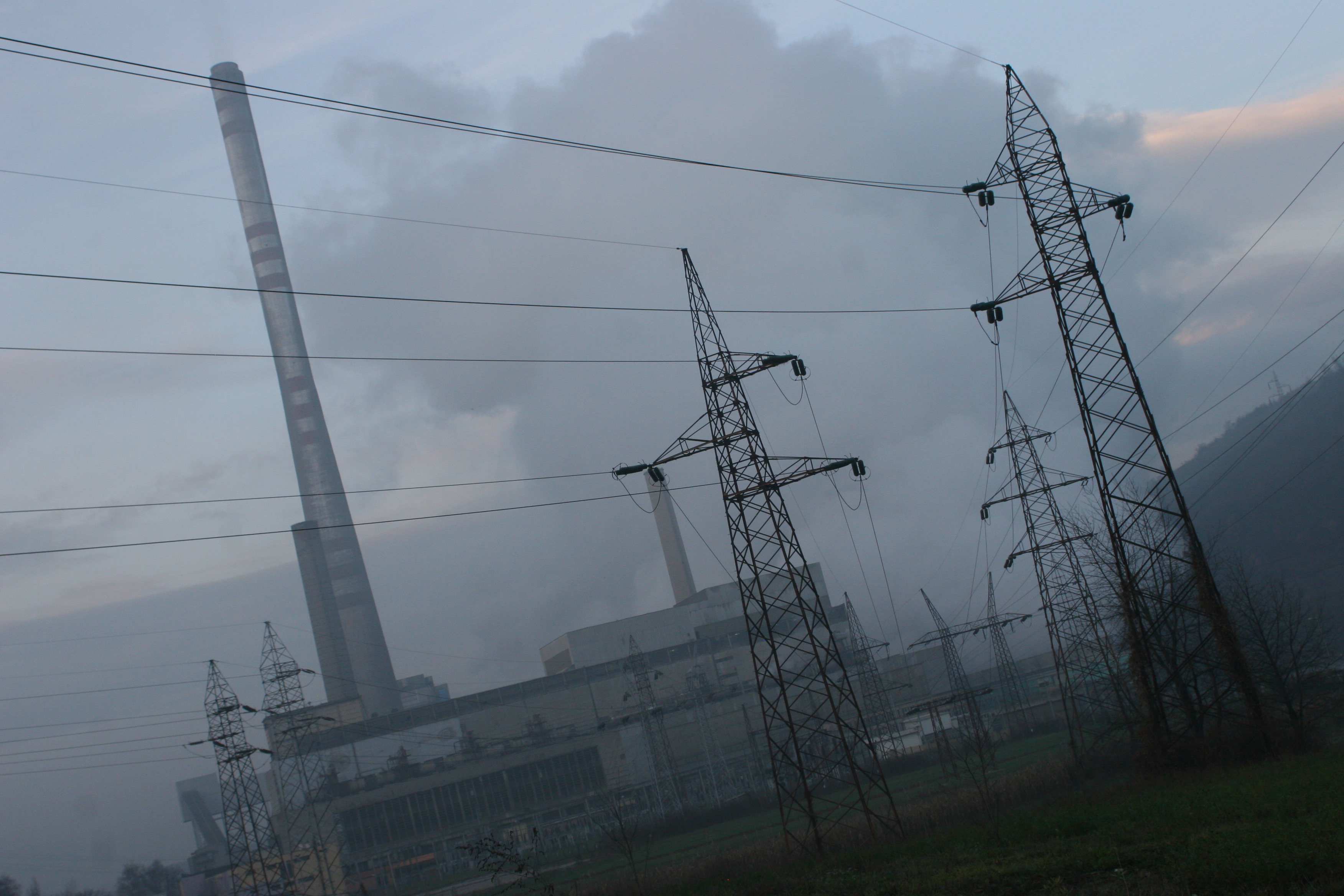 Power plant in the Zenica-Doboj canton - A. Rossini

From socialism to war, from war to market economy. The transition of Bosnia and Herzegovina in the history of a giant industrial kombinat, Zavidovići's Krivaja. The winners and the losers of privatisations, 15 years later

Between Žepće and Maglaj, the road and the railway split. The road from Sarajevo to Slavonski Brod enters a tunnel and runs north. The railway, instead, follows the Bosna river and continues a little east towards Zavidovići, the “city of wood”. Here, in central Bosnia,

the Habsburgs started exploiting in the late 19th century the huge forests of the Krivaja basin. Eissler, Ortlieb, Majer, the Italians Morpurgo and Parente started to cut logs for the needs of the Empire. A first sawmill, the “Krivaja”, developed into a giant kombinat in the Yugoslav period. In the 1980s, it had over 12,000 workers and employees, with branches in the US, Germany, France, and Algeria. It produced furniture and tools, planned engineering works, had its own departments for trade, transport and catering. In 1976, after the earthquake in Italy, the kombinat sent to the region of Friuli Venezia Giulia the pre-fabricated wooden houses that are still among the company's jewels. Krivaja resisted the wars of the 1990s, when houses, not factories, were targets. It was never bombed, except for one of its many departments, the Furniture 4. It kept working, even among snipers. What Krivaja did not survive was the post-war period.

A long process of decline

For 15 years, the kombinat kept living like a socialist enterprise, without socialism. The main problem, explains Džeraldina Miličević, secretar to the Economics in the Zavidovići city council, is that “nobody knew how to privatise it. Some wanted to split it into technological units, others to sell it in one piece. We had no other work experience. For generations, people knew that, once they completed their studies, they would be hired by Krivaja. Other municipalities in this region, such as Tešanj, Žepče, or Živinice, were able to adapt more rapidly to the new situation after the war. They did not have big factories, and this was their fortune. We had Krivaja, which was the source of our community's wealth. Then, it became our curse.”

The Zenica-Doboj canton is a south-eastern European partner of the cooperation programme SeeNet II, for the section aimed atstrengthening the system of small and medium enterprises in the cantons of Zenica-Doboj and Herzegovina-Neretva, in the municipalities of Prijedor and Tuzla (Bosnia and Herzegovina), and in the municipalities of Kragujevac and Lazarevac (Serbia). On the Italian side, at the institutional level, the project is led by the Tuscany Region – principle partner of SeeNet II, in partnership with Emilia-Romagna and Marche, with Oxfam Italy and Toscana Promozione as technical partners.

Woodworking in Bosnia and Herzegovina is one of the intervention areas of the SeeNet II unit on business facilitation for the transnational growth of local production systems, led by Friuli Venezia Giulia. Italian institutional partners include the regions of Marche, Veneto, and Emilia-Romagna, with Informest as technical partner, while south-eastern European partners include the counties of Osijek-Baranja and Vukovar-Srijem (Croatia), the autonomous province of Vojvodina (Serbia), and the canton of Tuzla (Bosnia and Herzegovina).

While the (vain) search for buyers continued, the value of Krivaja kept decreasing, and debts kept increasing. In March 2008, after selling some of the smaller units, the Federal Privatisation Agency – that had taken over ownership from the Zenica-Doboj Canton – organised an international tender. The contract was awarded to the only bidder – the local company Ferimpex, owned by brothers Ismet, Ferid, and Ibrahim Mujanović. The government forced Ferimpex to keep all the workers who, however, had been decimated by war, migration, or retirement. “We did not need to restructure, the war was the restructuring,” explains Ismet Mujanović, 58, while welcoming us into the factory's old manor house, one of Zavidovići's symbols. “When we bought the factory, there were around 2,000 workers left. 1,634 decided to stay, we committed to hire another 300, and 172 decided to leave.” The new owner does not disclose Krivaja's current turnover, nor how much Ferimpex paid for it. However, he confirms he managed to bring back some major European buyers – including Swedish giant IKEA: “Two years ago, their CEO came here. We started a partnership for the production of furniture components that, according to our plans, within five years will annually produce 40 million euro worth of products. But we are also interested in other markets, including the US.”

In August 2008, after winning the tender, Ferimpex signed a joint venture agreement with the Federal government, creating the new company “Krivaja 1884”. Privatisation was thus only partially implemented. The State still has responsibility for part of the company, and its debts. In Sarajevo, Senad Makić, of the Federal Privatisation Aagency, explains the terms of the agreement: “The new company's capital was provided by the Federation for the 30% (4.5 million convertible marks – 1 BAM = 0,51 €) and Ferimpex paid ten million BAM for the remaining 70%. The company took on debts for a further 26 million BAM and committed to investing 20 millions in 4 years. The remaining debts will be solved by the Federation.”

The company's debts include many years of unpaid wages and contributions. In order to be hired in the new company, workers had to sign a declaration committing to not sue. “We had placed three conditions for selling,” explains Vehbija Aličić, president of Krivaja Unions,  “For all workers to be maintained in their functions, for all seven years of unpaid contributions to be paid, and for all missing wages to be paid. The new ownership accepted upon the signing of the no-sue declaration. There were heated debates among workers. In some families, one spouse signed and the other didn't. Eventually, all workers signed except for 172. They did not trust.” Mustafa Ordagić is one of them. He explains: “It is not right to work at all costs…. The agreement with trade unions excluded the 12 years from 1996 to the privatisation of 2008, when we received lower salaries than those set by the collective contract. All in all, they owed us around 60,000 convertible marks. We were fired, but we sued and we won.”

The litigation lasted two years, while the new company could not be officially registered. Shortly before the 3 October elections, the Federal Parliament’s House of Peoples eventually approved, as a matter of urgency, an amendment to the law regulating business. Following the new dispositions, the Zenica tribunal approved the registration of the company “Krivaja 1884”. By December 2010, after the expiration of legal deadlines, the registration should become official, debts should be paid, and activities should resume officially. Many eagerly await the resolution. Despite having worked 40 years, in fact, many workers are not able to retire until their fiscal position is regularised. There is an air of expectation in town. After 15 years, maybe, Krivaja will start back.

Nobody knows exactly how many people are currently living in Zavidovići – or in the rest of the country, since the last census was taken in 1991. According to the estimates provided by the municipality for the writing of this article, Zavidovići would have 43,000 to 46,000 inhabitants. As in many other small and medium towns in Bosnia Herzegovina, the population strongly decreased compared to the last census, when it registered almost 60,000 inhabitants. Average salaries are not high – quite the opposite. The range is 420-450 BAM per month, a little more than 200 Euros – roughly, half of the national average. Today, living in Bosnia and Herzegovina with 200 Euros means living below the poverty line. And yet, jobs at Krivaja are very popular.

“The unemployment rate in town is close to 50%,” says Hazim Ahmić, director of the local employment office. “We have 6,921 unemployed in our lists, plus around 200 people who, for different reasons, did not enlist. All in all, there are over 7,000 unemployed and around 7,000 employed.”

The figures of this small town between Sarajevo and Tuzla almost fit with the national average. Yet, according to Ismet Bajramović – president of the confederation of independent unions of Bosnia and Herzegovina (220,000 members), percentages do not explain the country's reality: “According to official statistics, the unemployment rate is around 42%. In fact, also based on the data provided by the International Labour Organization, we believe a 25% estimate is more realistic. In other words, over 15% of those registered as unemployed actually works, but without contract. They are slaves, modern slaves. They work every day, with no vacations, contributions, or a decent salary. However, the unemployment rate is such that new capitalists can do what they want. After the war, we tried to resist privatisations, but we knew that, without investments, everything would fall down. In addition, the World Bank and the European Bank for Reconstruction and Development said they would not invest in non-privatised companies. We only managed to keep public ownership on Telecom, Energoinvest, and some strategic military productions. These are still public property and we want them to remain so.”

The best jewels in the Bosnian crown, indeed, have yet to be sold. “So far, less than 50% of the Federation's public property has been privatised,” says Nermina Kapić of the Federal Privatisation Agency. In fact, although 73.3% of public companies have been sold, the few remaining ones account for a significant capital. These include BH Telecom, Elektroprivreda, and some big commercial companies. In figures, the capital yet to be privatised amounts to 7.9 billion BAM over a total of 13.5 billion”.

Unions and government have different views on the destiny of the companies on sale. The time of kombinats ended violently in Bosnia. The market era has begun in uncertainty.