In tourism Pale and the mountain of Jahorina are best known as one of the main skiing destinations in Bosnia and Herzegovina. However, once the snow melts, this area offers many other attractions, one without doubt being Mount Romanija

The Romanija is a mountainous region separating Pale from Sokolac, with highlands stretching out as far as Vlasenica and Rogatica. Near Pale, the highland is formed by particularly interesting rock formations which are worth a visit from both a scenic and a historical point of view. The rocks crown the highland and attract the visitor's attention from the distance.

Throughout the centuries, these rocks have had an important role. In Yugoslav times they became a meeting point for people wanting to go mountaineering from Sarajevo. Romanija was actually the headquarters for the Sarajevo Mountaineering School.

Here mountain walking and climbing are closely entwined with the area's history. One example is the rock face called “Crvene Stijene” (“Red Rocks”), which is visible from the road linking Pale and Sokolac. This name came about during WW2, when the Partisan Slaviša Vajner "Čiča", from Novi Vinodol, in the Kvarner region, organised the first Partisan troops in Romanija and carried out the first uprisings against the Nazis. The “Crvene Stijene” (“Red Rocks”) became the Partisans' headquarters, and so they became known as “red” cause of the political association rather than for the natural colour.

The excursion, amongst Partisans and hajduci

Two huge rock formations can be seen from the inhabited part of Pale: the “Djevojačke stijene” (The Girls' Rocks) and the “Velike Stijene” (The Great Rocks), which are easy to get to from the centre of Pale.

On leaving the road leading to Podvitez you go up steeply for about 5km passing through some small villages. The asphalt road ends near an ancient Ottoman fountain named “Careve Vode” (Emperor's water). This fountain is a little gem tucked away in this alpine environment and now serves as a drinking trough for passing flocks of sheep. You can park here and go on by foot for about another 500m until reaching a wide clearing with a couple of benches.

Your path leaves to the left on your arrival at this clearing. The red and white tree markings are hard to spot and often ruined by woodcutters who have chopped down and dragged the tree trunks across the mountain. 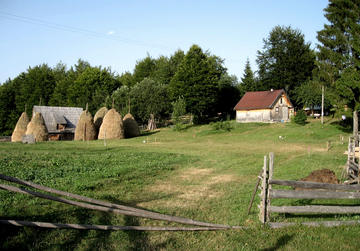 You find yourself in a thick pine wood, and the path slopes up gently. After about a 30 minutes walk our path meets a sad and recent episode in history. A pile of tree trunks and rubble marks the remains of the old Mountain Refuge Hut Slaviša Vajner "Čiča", which was used as a base for mountaineers climbing on Romanija. It was one of the best mountain refuge huts in Bosnia and Herzegovina but was destroyed merely out of spite during the last war for the sole reason that it belonged to a mountaineering club that happened to come from Sarajevo City. In this area there was actually no fighting at all and there are no other traces of this last war apart from this derelict.

At this sorry sight we walk round to the left of the rubble to find where the path continues and now starts to get steeper and more challenging. After about 10 minutes you arrive at another large clearing with wooden benches and clear blue and white signs, showing the way to Novak's Cave, “Novakova Pećina ”.

This clearing is called “Novakova Poljana” or “Novakova Njiva” (Novak fields). Here all is revealed as to the mystery of the scarce path markings: if you look up you'll spot an enormous painted red, white and blue flag... where all the red and white paint needed to paint the markings ended up!

You now reach the edge of the wood. A few paces to the east, following Cyrillic signs, and the path now becomes narrow and well signed. After a while this path has a metal wire to help you along the more exposed parts, where you may want to use a metal way kit for extra safety, even though it is not indispensable.

You are now halfway up the rock face, and this equipped path crosses some climbing routes which begin further down. Soon you get to a junction with one path heading upwards and the other downwards. Going up you see our destination, a large, partly walled cave dominating the whole valley. By carrying along this path you reach Novak's Cave. According to the Serbian epic poem, the historic character Novak from the 16th century lived here. He is famous in this epic for his actions against the Turks and it is said that he sheltered in this cave after his raids.

In Bosnia Herzegovina the Piedmont region leads the Action aimed at developing holiday farms in the mountainous areas of the SeeNet II Programme, with a strong enphasis on the recovery and promotion of places suitable for outdoor sports.

There is a spectacular view across the Pale Valley and the ski stations of Jahorina from this cave, and the view stretches as far as the Trebević, the Bjelašnica above Sarajevo and the Zelengora and Montenegro mountains in the distance. This cave is the perfect place for a break. On leaving the cave you take the path heading downwards along the metal way which gets rather steep in parts, and the narrow path continues along the rockface.

For the more daring

Going more eastwards, along a path badly marked, you reach the striking “Zub” (the Tooth), a 50 m high rock pilaster which is separated from the rock face next to it. For climbers, the west face has a route with two pitches around 3rd and 4th grade, and other more difficult routes are found up the east face. 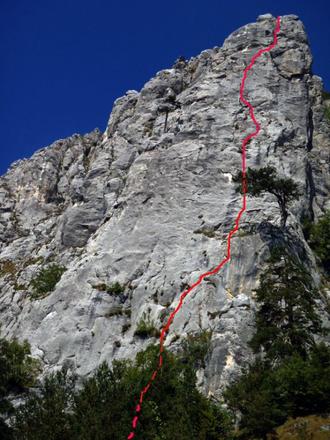 This route has both the old protection as well as having been recently secured with spits both along the routes and at the stances. All pitches are bolted and you climb on good quality limestone even if it may be a bit dirty in places. On reaching the top you have the sensation of standing on a balcony over the forest, closed in and protected by the solid rock all around; a unique experience.

For those who wish to do some challenging climbing there are several traditional climbing routes with a range of different pitch lengths and difficulties. There is original protection in place, although it is better to go with your own gear including friends and nuts. More recently, Italian climbers such as Paolo Pezzolato, Sara Gojak and the legendary “colonel” Roberto Ferrante, key figure in the Bosnian mountaineering revival, have put themselves to the test on these routes.

You can get hold of the route plans by contacting the various local guides or the Mountaineering Association of Bosnia and Herzegovina. This “Zub” path goes right along to the end of the rock face.