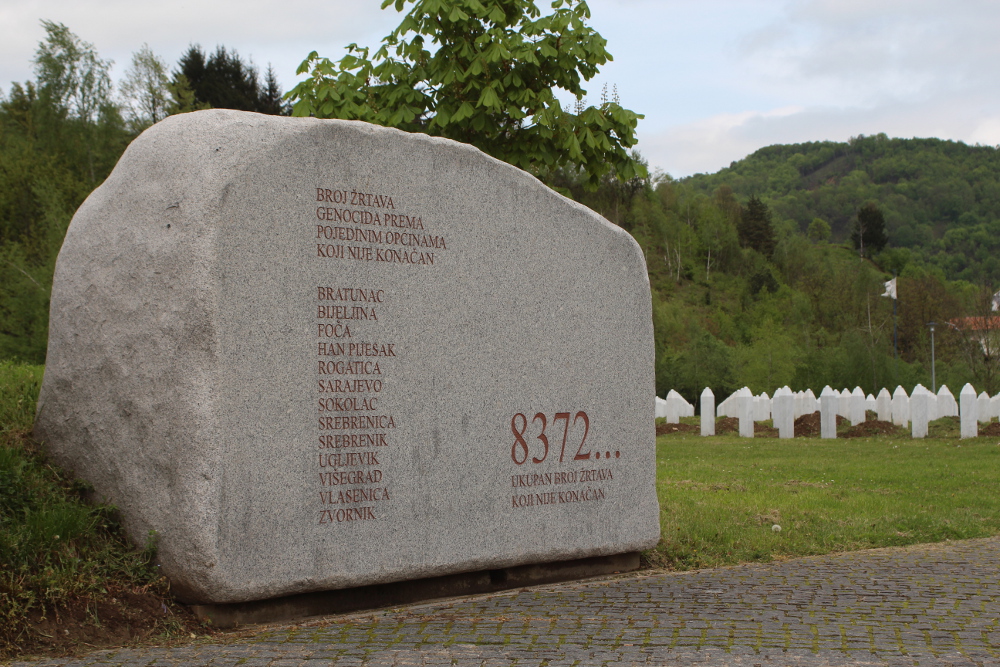 Denial is the last stage of genocide. Acknowledging the crime, after 20 years, could help Bosnian society moving forward

As July 11th approaches – the anniversary of the Srebrenica genocide – anxiety is growing on both banks of the Drina river. Serbia and the Bosnian Serbs get busy denying, minimising, splitting the blame, haggling about figures, justifying themselves, and insisting on their own version of the events.

Bosnian Muslims (Bosniaks) expect justice, recognition, and human compassion. And, twenty years later, many are still waiting for the remains of their loved ones, disappeared in the worst crime of war and against humanity committed in Europe since World War II.

After wars and atrocities, what remains are names of places, new words. Auschwitz, Katyn, Guernica...

Srebrenica has been among these words for two decades. It brings images of broken families, people loaded on buses and trucks to unknown destinations, terror, men blindfolded and led to their death, methodically killed. And the mourning of about 30,000 Bosnian women – mothers, wives, daughters, and sisters – who lost many family members in the genocide in Srebrenica. Over 8,000 Bosnians were killed.

A pain greater than ascertained death is the uncertainty about the fate of the disappeared. Many women of Srebrenica are still looking for the remains of their sons, fathers, husbands, and cousins. One of them, Hatidža Hren, waiting to find the remains of her husband Rudolf, screams desperately: "Bring me his bones, I will know."

Five Bosnian Serb officers have been convicted and two trials are still ongoing at the ICTY – those of former Bosnian Serb leader Radovan Karadžić and Bosnian Serb general Ratko Mladić, both charged with genocide as well as other crimes.

The Srebrenica massacre is the best documented war crime ever. There are millions of pages of testimony, audio transcripts, videos, and forensic evidence. Over a thousand people, including many genocide survivors, have testified on the events in Srebrenica.

A 21-year-old told, before the ICTY, how he was just six when he was brought before the squad that shot Bosnian Muslims. The Serbian driver who brought the killers food and drinks took pity on him and saved him.

The images we see today are genuine television coverage – footage that, at the time, we watched almost live, sitting in our homes. Some crimes were documented by the murderers themselves – the Serbian paramilitary unit of "Scorpions" filmed its murdering of a group of 16 Bosniaks of Srebrenica. For years, you could rent the tape in video clubs in the Serbian town of Ruma. And when the judge asked them why they had filmed, they replied that they did it because they believed that, after the war, they would have been considered heroes.

It took an organisation to kill 8,000 people in a week, to dig mass graves to bury them, and later exhume the bodies and bury them again in a second and a third pit. It was not a job for amateurs, and could not be improvised either.

The Serbian driver who saved the child from the firing squad was in charge of the food and drinks! Everything was planned in this horrible business. At some point, the soldiers who killed all day long needed a break to eat and drink.

The fact that Serbs exhumed corpses from mass graves and moved the remains of the slain elsewhere means that they were aware of what they had done, and were trying to hide it.

It was documented how the buses which carried Bosnian Muslims to the places of execution belonged to public companies in Serbia and had been brought from Serbia for that purpose, like the bulldozers and other machinery to dig mass graves. The bullets that killed Muslims were made in the "Zastava" factory in Kragujevac, Serbia.

Genocide is a crime of a State and its institutions, through the apparatus of repression – the army and the police. The few Bosnian Muslims who tried to escape across the Drina river in Serbia were captured, put in concentration camps, tortured, and some killed.

Genocide is not only Srebrenica, as the Holocaust is not only Auschwitz. Genocide is a process. As pointed out by Ed Vulliamy, author of "Seasons in Hell", Srebrenica of July 11th, 1995, is just "one of the hundreds of small Srebrenica that happened in Bosnia from 1992 to 1995".

There is no genocide without ideology. In the case of Srebrenica, the ideology of genocide was Serbian nationalism. Many of the people who killed unarmed, blindfolded Bosnian Muslims would never have committed such a crime under normal circumstances. Serbian nationalism had prepared and encouraged them to do so. Ideology had absolved them from sin and guilt, in advance. The case of the "Scorpions" is a blatant example of this.

Almost all the perpetrators tried and convicted (and not only in the case of Srebrenica) justified themselves before the courts by saying they had defended the "homeland", "the people", "the flag". Symbols, not facts, are what ideology rests on. None of them justified himself on the grounds of defending his home, mother, or children.

Over the last 20 years, Bosnian Serbs and Serbia have been committed to denying the genocide, classifying what happened in Srebrenica as one of many crimes. Denial has become a State strategy.

This is possible because many of the current Serbian politicians, on both banks of the Drina river, are the same people who had been part of Serbia's political elite at the time of the genocide. Their ideology is still nationalism.

This attitude is wrong. Denying guilt continues to cause pain to the victims. It is not by chance that denial is regarded as the last stage of genocide.

In the long-term, denial is harmful for Serbs themselves. This attitude has already damaged the image of the people of Serbia, compromised the country's international reputation, and hurt its position in various global institutions.

Acknowledging guilt is also, and perhaps above all, an issue related to civilisation. Showing compassion for victims is the least one can do.