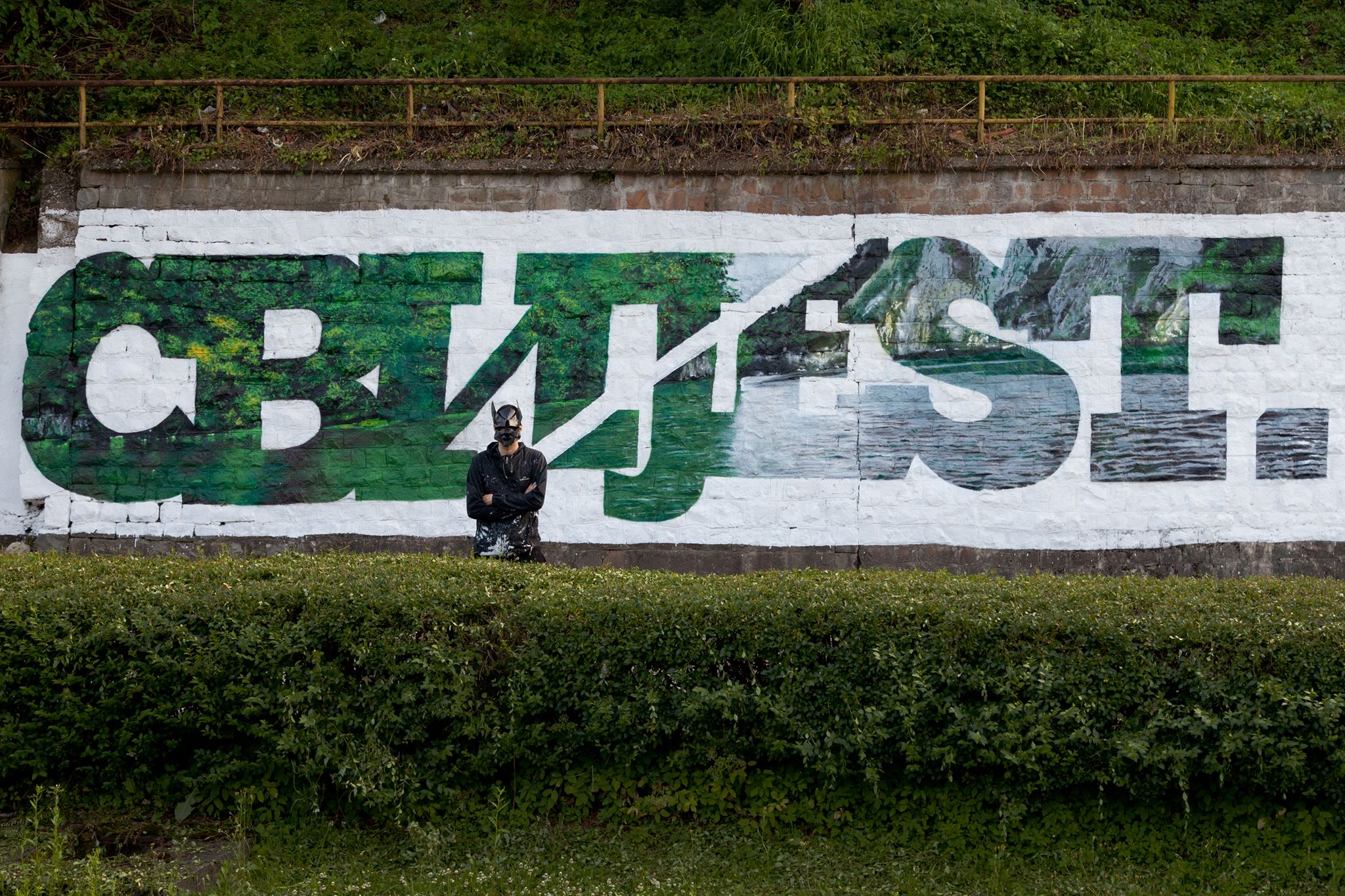 Graffiti created by Manu Invisibile in Srebrenica - "Awareness", written in part in Cyrilic and in part in Latin alphabet

A "war for truth" is being fought today in Bosnia and Herzegovina – a clash based on ethnic competition, with words and stories about the past as the main weapons

"It hurts, every year it hurts more. The problem is that we – those who lived there – had an idea of ​​what the community that was destroyed could become. Time does not cure all the wounds", explains Emir Suljagić in an interview. Suljagić, who survived the Srebrenica genocide when he was a little older than 20 and wrote the book Postcards from the grave, is one of the most tireless witnesses of the events of July 1995, when over 8,000 Muslim Bosniaks were killed by Bosnian Serb forces.

In recent years, and especially in 2017, the public debate on Srebrenica has been focusing on current issues, including domestic political speculations, aid, and international pressures.

Suljagić, on the other hand, seeks to restore the centrality of those who are becoming less and less of protagonists over the years. "When I talk about genocide victims, I speak of my classmates, people I grew up with. And I know how much potential we lost in that monstrous crime".

Now that transnational justice and historiographic documentation have expressed their verdicts (or are about to do so), it will be increasingly crucial for the transmission of the past to remember individual names and stories, regardless of their identity and collective affiliation.

This is the objective of this unpublished video , recently released by the BIRN agency, filmed among the Srebrenica residents during the siege by the Bosnian Serb forces between 1993 and 1995 – in order to communicate to us their humanity, between hope and resignation.

This is the objective of the youth forming the Adopt Srebrenica association – a documentation centre collecting material from the pre-war period, photographs and testimonies in order to retrieve memories of disappearances and to overcome narratives centred on ethnic separation, reclaiming past coexistence as everyday normality.

Like every year, on July 11th, the remains recovered in the common pits and identified in the past few months were buried at the Potočari memorial. This year, 71 men joined the approximately 6,500 people buried in the previous years. The fact that over 1,000 are still missing is a warning that elaborating trauma will take a long time.

In truth, the commemoration was carried out on a lower note than usual. Public participation was more limited, as was the presence of international guests. No representative of the Serbian government participated, as a result of the turmoil provoked in 2015 by the visit of then Prime Minister Vučić, but also of Sarajevo's failed appeal against the ruling of the International Court of Justice on the Bosnia-Serbia case, which led to new tensions in their mutual relations.

A symbolically important gesture, albeit politically circumscribed, was the visit to Potočari by several Serbian opposition members. Saša Jankovic, who came second in the recent presidential elections, was clear about Belgrade's need to acknowledge the genocide and deal with the past.

This year, however, the spotlight was on what happened (or was supposed to happen) outside Potočari.

Serbo-Bosnian ultra-nationalist groups unleashed a brutal, unprecedented negationist offensive, unfolding in three episodes just before July 11th. They all contained a reference to the word laž (lying, lie) in order to emphasise their revisionist intent.

The first episode involved Liljana Bulatović, biographer and close friend of general Ratko Mladić, known for her negationist stance, glorification of the Bosnian-Serb war leadership, and deliberate insults against victims. Bulatović was invited to Srebrenica to present her book Srebrenica: lie and deceit to the Serbian people on July 7th, just before the commemoration in Potočari – and within a municipality-funded cultural event. Only after the mobilisation of numerous NGOs in Bosnia and Herzegovina and Serbia, the event was cancelled.

On the same day, a local ultra-nationalist association (Istočna Alternativa, "Eastern Alternative") announced for July 8th the posing of a monument dedicated to the Russian ambassador to UN Vitali Churkin in the centre of Srebrenica.

Churkin, who recently passed away, became a popular hero for Serbian nationalists in July 2015, when he posed a decisive veto against the British resolution calling for the recognition of the Srebrenica genocide at the UN Security Council.

"They have Bill Clinton, we have Churkin", explained an advocate of the initiative – another case of "geo-politicisation" of memory, which fuels the conspiracy theories depicting Srebrenica (and all the Yugoslav wars) as a continuum in the so-called "strategic war" of the Atlantic West against the Russian-Slavic East, relieving the local political and military elites from any responsibility.

Again, there were vibrant protests by NGOs and activists, that described the monument as "a slap in the face of survivors", forcing a reticent city administration to deny permission for "fear of mutual provocation".

The most visible event, however, was scheduled in Banja Luka. Precisely on July 11th, in the centre of Republika Srpska's capital, the ultra-nationalist movement Zavetnici had convened a demonstration called "Support Ratko Mladić – Stop Lying on Srebrenica", urging to protest against the "manipulation of the number of victims" and "a political project aimed at demonising the Serbian people".

The episode disconcerted intellectuals and civic activists, but was mostly met with indifference in the city context. "This is a defeat for humanity. Legal or not, it is incivil and inhumane to organise such a manifestation on that date", commented political scientist Srdjan Puhalo.

The institutions of Republika Srpska, on the other hand, showed indulgence and some tacit complicity. The event was promptly authorised by the police, until the authorisation was withdrawn just 24 hours before the event, with instrumental rather than substantive motivations.

No clear stance came from RS president Milorad Dodik ("It is a legitimate event. If you go, I'm going too", he stated on television) or opposition parties. The power block in RS stood united in firm, monolithic removal of its historical responsibilities.

Mladen Grujčić, the first Serbian mayor in Srebrenica since the 1990s, does not seem to have contributed to reconciliation. If some hope came from his young age and from the spirit of alternation that he incarnated after years of inconclusive SDA leadership (nationalist Bosnjaks), his apparent inability (or disinterest) to make appropriate gestures for symbolic recognition soon took over. Grujčić's long-anticipated absence at the Potočari ceremony marks a definitive step back in the reconciliation process – something that will be complex to reverse.

The Bursać case and the normalisation of fascism

In Republika Srpska, voices against negationism have been few yet incisive. Their radical effort has been necessary to break the veil of indifference and hostility surrounding the dominant narrative on the 1990s.

In two articles ("Anatomy of Evil" and "Banja Luka Celebrates Genocide") published by Al Jaazera Balkans, editorialist Dragan Bursać has spoken up against "normalising fascism" with sharp provocations and analogies with Nazi crimes. "Imagine a scenario where Himmler and Leni Riefenstahl present a Holocaust negation movie or book paid by surviving Jews. This is what is going to happen in Srebrenica".

Bursać, a Bosnian Serb from Banja Luka, has expressed harsh judgments on his city. "Here there is a silent majority that somehow endorses the neo-fascist manifestation. The problem is not the 5% of fascists, but the 95% of people who remain silent, who did not say 'Go away'". Following the publication of the articles, Bursać received several death threats on social networks and was forced by police to temporarily move to a secret location, under protection.

Bursać is a new target of what Refik Hodžić calls a "war for truth" based on ethnic competition, which is now being fought in Bosnia and Herzegovina – not with weapons, but with "other means", primarily words and narratives on the past. Not on a battlefield, but in the space of politics, media, and daily life – homes, places of worship, and the Internet. A war that is fought in Banja Luka as well as in Sarajevo and Mostar, where "other" narratives rewrite history and refuse to recognise the different pains and memories that derive from it.

Young generations are especially targeted. "Young people in Banja Luka are at least 80% more nationalistic than their parents. They think they have it all clear. For now, they are just keyboard warriors. It is their very lack of experience of war that gives them a comparative advantage in terms of hate, single-mindedness, and provocation", Bursać bitterly explains to OBC Transeuropa. In this war for truth, Srebrenica remains one of the main battlegrounds, and many things must happen – or a long time must pass – for things to change.