The second life of Slobodna Bosna 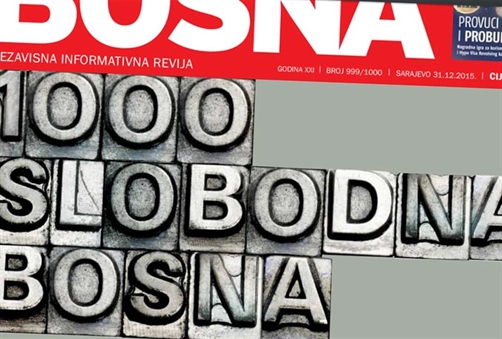 Slobodna Bosna, a leading Bosnian weekly, is no longer in newsstands. While many mourn the loss, the magazine may be about to start a successful second life on the web

Sitting on a couch in a hall next to the editorial offices, smoking, Asim Metiljević – current editor-in-chief of Bosnia and Herzegovina's historical weekly, Slobodna Bosna – looks relaxed and confident about the future of his magazine. "There is nothing to be done, this is the future, and not just for us – for everyone", he explains to OBC. "Sure, we belong to a past that had been built in rotaries, with the smell of ink and an army of people who had to take care of everything, from the layout to the press, not to mention the distribution. Each generation brings changes – my daughters, for example, have never bought a daily paper. We need to adapt. Sooner or later, information will be done exclusively online – the process seems to be inevitable, especially in small countries, such as ours".

At the beginning of 2016 Slobodna Bosna, weekly magazine active for twenty years and counting 1,000 issues published, stopped publications and transferred all contents online . According to Metiljević, causes lie in changing times and the approaching end of the printed press, but also in unsustainable costs and a lack of attention by the authorities. "In Bosnia and Herzegovina, publishers of newspapers and magazines have to pay a full-rate VAT of 17%, regardless of sales. This means that, every week, we would have to pay taxes on thousands of unsold copies. In addition, there are typically Bosnian phenomena, so to speak. We are a poor country, and many people struggle to spend even just 3 marks (€ 1.50, the price of a copy). It is quite common for readers to purchase a copy, read it, bring it back, and ask for one mark back".

On the future of the project, however, Metiljević appears optimistic. The magazine currently counts a dozen employees and freelancers. "Going digital has saved us a lot of money, you have no idea how much we used to pay for distribution. In addition, this change is extremely motivating: we have the opportunity to deal with a different, more dynamic kind of journalism".

However, Metiljević glosses over the delicate issue of financing – can Slobodna Bosna survive on advertisements only? Most importantly, can a magazine that built its reputation on investigative journalism reportage and insights rebuild a future as one of the many portals that essentially report short news, usually no more than 500 words?

The end of an era

Since Slobodna Bosna delivered its thousandth and last issue and announced its intention to abandon newsstands, many have mourned a journalistic project that, realistically, has a difficult road ahead.

The Union of Journalists of Bosnia and Herzegovina issued a statement regretting the "immeasurable loss for the journalistic community and the citizens of this country. Slobodna Bosna is one of the few independent media in Bosnia and Herzegovina, which for years has been able to withstand the pressure of politics and provide a critical look on current events in Bosnia, exposing corruption and organised crime, resisting nationalism, fascism, and any other force threatening democratic pluralism and media freedom. The end of Slobodna Bosna is a direct attack against Bosnia's journalism community, which over the years has been devastated not only by the market, but also by huge political pressures through advertisements [which are generally purchased by public companies, i.e. controlled by different parties, author's note]".

For other observers, like Boro Kontić, director of Sarajevo Media Centar – an association devoted, among other things, to promoting quality journalism in the country – the choice of Slobodna Bosna will not automatically imply the end of this project. "This is an opportunity for Slobodna Bosna", said Kontić to newspaper Lupiga , "because for the first time there is a group of renowned journalists running a portal in Bosnia and Herzegovina as their only job. So far, Bosnian news sites have been managed mainly by IT experts, or people who had realised that the future was online. Slobodna Bosna could lead the way for Bosnian information".

Whatever fate awaits Slobodna Bosna, the scenario of media freedom in Bosnia and Herzegovina still appears increasingly bleak. This was highlighted by Sabina Hodžić in a recent report published by Media Centar, condemning in particular the dependence of Bosnian media on the state, and therefore, ultimately, Bosnian political parties.

"Either through direct financing through public funds [in the case of public media such as television, author's note] or advertisements sponsored by public enterprises, the state or political parties are the main actor in the Bosnian information market [ ...] since, in general, experience has shown that in small markets – as ours is – media do not have enough resources to become self-sufficient", writes Hodžić. And, on a case involving Slobodna Bosna:

"The two telecommunications companies BH Telecom and HT Mostar, publicly owned, are the major advertising companies nationally and are under the control of politics, as their managers are appointed by the strongest political parties in the Federacija [one of BiH's two entites]. Slobodna Bosna began to investigate cases of money laundering involving these two companies, and after the first reportage, published in 2010, it experienced a drastic reduction in demand for advertising contracts by HT Mostar".